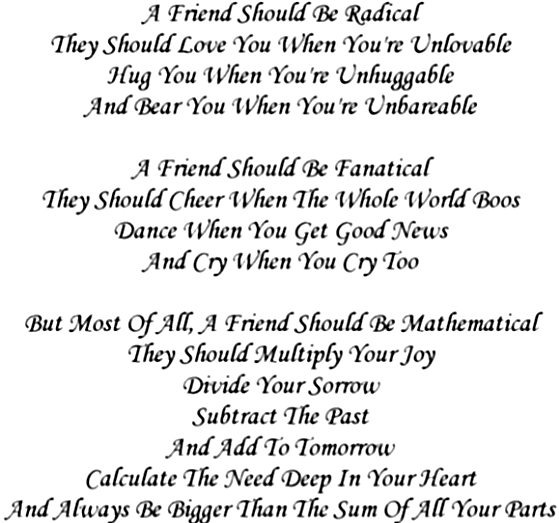 When I was younger and  in school, there was always a 'best friend'. It was mandatory. Everybody had a 'best friend', a partner, an inseparable part of yourself, whom you shared secrets about the opposite sex with, whom you told your dreams to, whom you could not wait to meet the next day day, just because within a short span of  12-14  hours (the time between when you saw them last evening and when you would see them again the next morning at school) there would be so much that has happened that you would want to share. Every trivial little thing, every incident, every minor and major real and imagined mishap had to be narrated with detailed precision.
I don't know as adults if people have 'best friends' any more. Do you?
I certainly have 'very close friends' and 'good friends' and 'friends' and 'neighbours' and 'people living in neighbourhood' and now  in the Internet  era 'online friends'  too. (But I prefer meeting 'online friends' and have indeed met most of the people who used to be 'online friends') Today if you were to ask me who my best friend is (and my daughter asked me this a few days back) it would be hard for me to name one single person. One of my closest friends and I had a discussion about this once. She said that for her, her spouse was her best friend. So I asked her if she told every single detail about her life to her spouse. She laughed and said that would be so boring. I agreed and we both giggled over it. (Incidentally she has been married even longer than I have--and I have been married 15 years) Then I told her that even though I am one of her closest friends, if she were to tell me  every tiny detail of her life, I really wouldn't want to know :-)
Kahlil Gibran had once said on marriage

“ Let there be spaces in your togetherness and let the winds of the heavens dance between you. Love one another but make not a bond of love: let it rather be a moving sea between the shores of your souls.”

I think the same applies to every relationship that you have too.

For a relationship to grow, for the people in it to grow as individuals, for the bond to grow stronger,there has to be  at least a few things  that are separate, which the other person is not a part of. I think one should allow that other person that space and time.

In school, we did not need it. We had not yet evolved as people. We did not have many aspects to our personalities. Therefore we needed that security blanket of a 'best friend' without whom we could not imagine life.We held on to it as tightly as a drowning man would clutch a piece of floating wood which would take him to safety.

As adults we know that nothing stays the same forever.

Not even Best friends.