June 23, 2010
Getting your friends to do a guest post for your blog marathon is as hard as getting Diego Maradona to play football for India, especially taking into  consideration the fact that we do not have a team that has come even close to qualifying for the  FIFA world cup.
But I thought this would be different. My friend Prashant does have a blog after all and to draw parallels here, it would be a front runner for finals, and not even the also-rans. Everyone also knows he wrote some fantastic stuff for the Royal Challengers blog, although I am sure being in the esteemed company of Kumble and Ray Jennings would have been motivation enough for him, apart from the luxurious five star hotel stay that they had ensconced him with, from where he churned out posts after posts.
Still, there is pure bribery and then there is a thing as friendship, I thought. And I waited patiently while the man busied himself, acquiring a degree in Math and Economics from no less than the London school of Economics. Like a sincere friend should, I extended my support and remembered his exam dates (too) and texted him, taking care to even text him my best wishes, at an appropriate time (which was rather hard considering we are in two different time zones) so that my text wouldn’t wake him. I also followed it up with a phone call, the day his exams got over. But tactfully and strategically I must add, I did not mention the guest post request, even then.
Then I made a truly wonderful, marvellous and outstanding portrait of him.(Click here to see it)  He was delighted. He even had it as his Facebook profile picture for a while.
Now was the time to strike. How could he refuse me a guest post now? So I sent him a very casual mail  asking if he would like to write a guest post  for me and very casually  I also said that he could definitely say a no and I wouldn’t mind at all. (Of course, I did not tactfully and strategically again, mention that if he had said a no I’d have smashed his head with a bludgeon)
Turned out that the bludgeon wasn’t needed after all. He agreed sweetly (the gentleman that he is), blissfully unaware of how close he had been to having his head smashed. :-) But experience has taught me that promising is one thing and actually getting the guest post in hand is another thing entirely. He is adept at being invisible on g-talk and he gives darshan to his devotees very rarely  and even when he does, it is usually like a  sheegra darshan of Lord Ventateshwara . :-)
So the other day (which must have been a sheegra darshan  day for him) on G-talk , he  saw me online and he made the error of saying a ‘hey preeti’ to me. I pounced on him faster and swifter than the Sudarshan Chakra of  Lord Vishnu and thundered   a “ WHERE IS MY GUEST POST?”
He was silent for 3 seconds.
Then he went offline!
I could only imagine his agony/ misery/fear/terror. On hindsight, maybe I should have strategically and tactfully said a “hey prashant ” to him, before asking for my guest post.
:D 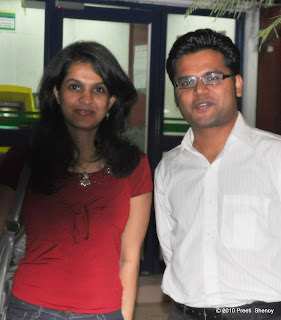 Picture of prashant and me, clicked on my b'day at Bangalore.


PS: 1.Watch this space.Guest post by Prashant Dhanke .Coming up tomorrow.
2. Gillian Da Silva and Ajay Chauhan, be afraid..Be very afraid. It's your turn next to do a guest post. *stares with eyes narrowed and the meanest face*


Current mood video:   With a little help from my friends- Beatles