June 02, 2010
Oh my God! To be very honest I did not expect such an enthusiastic response for my toying with the idea of a blog marathon. I had thought that I would get about 25-28 comments and I could wriggle out of it. :P No such chance! I am really overwhelmed at the really encouraging remarks I have got in my last post. So yes! I am doing it :) A new post every day for the next 30 days :)  Here is my first.

Sometime back I had done a post called phoren country-desi dil which was about the subtle and not so subtle differences between living in India and living in the UK.(click on link to read it)  This post is  a kind of  sequel to that.(so my  English and non-Hindi speaking friends will have to excuse me for this one too)

Now I have lived here for more than a year and I still find I am a total desi at heart. I do appreciate my host country and I admire many things about it. Yet certain differences hit me harder than Gabbar Singh's laugh in Sholay jolts the unsuspecting victim as he quivers in fright. :-)
I list them here in no particular order. 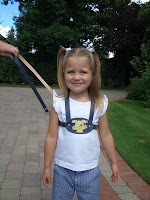 1. One thing  I found in UK which made my eyes pop out more than the eyes of  those drunken men watching and salivating over  Bipasha in bidi-jalai-le song was something called the Child harness which I was seeing for the first time in my life. The very first time I saw it, I stared in amazement to make sure that it was indeed a child at the end of it and not a dog! In India, I have seen only dogs being walked this way. Here it is a common thing to use for little children! ( Image from the site: http://www.babies-born.co.uk/HarnessesandReins.html )
When I asked an English friend about it, he was very surprised to find that we do not have them in India.
"Oh!" he exclaimed "How did you ensure the safety of your children when they were little?" he asked in amazement.
" Well, I always carried them on my hip and when they were old enough to walk I held their hands and walked them!" I replied. Here I have seen parents actually tugging this harness when the child wanders too far and  I do feel a little sorry for that tiny human being at the other end of the harness, though I do know the parents have the safety of the child uppermost in their mind. But still my desi-dil cannot take it.

2. Something that I really admire about this country is the absolute gentlemanliness and good manners when a minor auto-mobile accident has occurred. In India, the first thing one would hear is the choicest of expletives involving mother and sister uttered in not so soft voices and the expletives involving other parts of anatomy increasing in direct proportion to the damage caused to the vehicle. :-) But in the U.K, if something like this has happened, people pull over to a side. They then gently come out of their vehicle and say softly  "Oh dear! Are you Ok? I am so sorry." (You have to actually strain your ears to hear what they are saying. They are so quiet!) They then exchange their numbers and get in touch with their insurance companies and politely drive away and the matter is sorted in less than 3 minutes. In India, you can expect a huge crowd to gather and even people not remotely associated with either of the vehicles would be the ones goading the owners to "maar saale ko" :P :)

3.In India, organising children's birthday parties would mean that there will be at least 40 children on your list who would be classmates, friends from dance class, friends from karate class, friends from residential complex, friend's cousin, cousin's friend, cousins, friends's friends --oh well--you get the picture. But in UK, you invite only the closest friends and the ones who truly matter. There is also no concept of 'return gifts' which used to be such a useless but mandatory exercise in India . Here, there is also  no 'trying to out-do the other' which I used to observe in India, where if one mother hosted her child's birthday party with a princess theme, then another would probably fly the kids in a helicopter with a real princess! :-) Needless to say I definitely prefer organising  birthday parties in the UK, despite the fact that if you compare costs, it would cost more in the UK to invite 6 kids than it would cost to invite those 40 kids back in India. (Yes ,UK is prohibitively expensive)

4.Coming to the expensive part, if I convert the amount to Indian rupees, I would pay Rs.74.50 for a loaf of bread here and Rs.84.60 for 2 litres of milk. My daily newspaper would cost me a minimum of Rs.35 and on weekends it would cost Rs.135! A cab would charge me Rs.338 for a distance of 3 kilometres which would take a 3 minute ride :-) If I hire a house maid, I would be paying Rs.700 for an hour!!! :-) (and you have to hire them for a minimum of two hours)
Needless to say I am now an expert in vacuum cleaning,  dusting, making beds, cooking, mopping and even gardening! U.K does make one very self sufficient and I wonder now why in the world I would wait for maids back in India when it takes me just a fraction of the time to do it myself and the job I do is ten times better too!(Yeah I know--My prospects for  alternate career are indeed bright :-))


5. In Sainsburys (which is one of the  larger supermarket chains here where you go for your grocery shopping) you can be sure that the group of people making a beeline for 'natural yoghurt' (what we call dahi) aisle are Indians. This really makes me smile :-) They have rows and rows of all varieties of yoghurt ranging from hazelnut flavour to strawberry to black currant. The plain yoghurt  is kept at one corner in one particular aisle (the store is so huge it has more than 40 aisles)  and at any given point of time, it would be Indians who would be around that dahi aisle like it was the hidden entrance to the secret passage in Indiana Jones and the temple of Doom. :-) We cannot make dahi here , like we do back in India(so we have to buy it) , as the weather is too cold. It is just 17 degrees here and it is 'luuuuvly weather' as the English would say. :-)

6. I have to really pronounce each word  slowly and correctly with a proper English accent whenever I need to be understood by an automated voice prompt service.Here, most things are automated and human interaction is minimum. The other day I was calling up my TV service provider and I was asked by an automated voice to say my post code for identification to gain access to the system. After saying it twice and the automated voice telling me robotically "Sorry, the Post code you mention was not recognised" I realised that I have to switch to an English accent. I did that and it granted me access :-) I must admit I felt like Salman Khan for a long time after that :) (If you have heard him speak English you know what I mean)

7. One thing I like about UK is how I am seen here as a 'person with an own identity' which is very different from what a woman in India would experience. In India, a woman is always either someone's wife or someone's mother or if she is a young girl, she is usually identified in the society or the community as someone's daughter.(yes it is so even today except perhaps in the Metros)  Here in UK, you are seen as a woman first. When I first entered this country, I actually had to fill up a form which asked me if I was married to Satish and whether indeed he was the biological father of both my children! I found it amusing at that time but in the UK, having children by different fathers, living in together without getting married, divorces are all extremely common. In fact, people are surprised to find that we have been married for more than 15 years now and both children are OUR children. (not his, mine and hers as seems to be common here from what I have seen) :-)

Current mood video (see on the right) : Desi Girl! :-)
Tomorrow:  Some marvellous images from this amazing country with short notes about each.