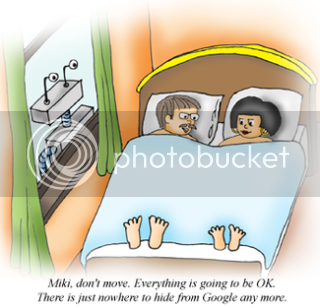 Every morning when I wake up, there used to be only one mantra that I chanted. It is an extremely powerful one you know. It works almost every time. It has let me down only on very rare occasions and that too it would be because I was not diligent enough. The mantra is no great secret. In fact I am sure many of you would be using it too, everyday. It has be come such a part of our lives, that we wonder how we existed before it. Everything before it, seems meaningless in comparison.

What is this magic mantra? Yes! You guessed it! Tha magic mantra is "Googleaya namaha" :D

Of late though it has been losing its sheen faster than a  freshly scrubbed squeaky clean pig let lose in a puddle of dirt. Perhaps it is worn out due to fatigue or over-use. Or perhaps it is early dementia setting in. I don't know what it is, but it isn't just the way it used to be.

For starters, among my long litany of 'something -is-wrong' take the ads that it shows me on the right side of my beloved inbox.There was a time when it used to show me relevant ads, like the time it showed me an ad about pencil portraits or making cheap phone calls to India.

But now? I shake my head sadly. It is showing me underwear ads--G string,Briefs, swimwear, fig leaves. That by itself, wouldn't have been so bad too, but for the fact that they are all Mens underwears! There is Man underwear, Underwear for men, G-strings for men and even thongs for men and honestly I shudder to think which male would want to wear this. (It looks more like a torture device to me)
Poor google--it must be thinking I am a male with an underwear fetish.

As though, torturing me with the above wasn't bad enough, it has resorted to showing me Eczema photos! It has decided to offer me discounts on treatments too. Along with that it also has  Mushroom photo and a chocolate cake photo. I think I have gone off chocolate cake for life. I blame google.

Google sometimes thinks I need a new phone, even though I have a state of the art touch screen one which I am rather proud of. It shows me supposedly good deals on the blackberry and tells me about network coverage and broadband deals, never mind that I already have very good deals on both.

It also sometimes decides that I have badly behaved children and offers me discounts on videos like 'How to get your children to behave by putting them in a cage' and 'How to hang your children upside down without getting caught by the social services'. Okay I made up the titles (ha ha ha--got you there didn't I?! ) but you get the picture.

I am also convinced that google has got my age and interests completely wrong. It offers me advice on how to get my ex-boyfriend back completely oblivious of the fact that there is a reason why he is ex in the first place. It also shows me how to 'hook a man and keep him'. (No thank you, the one I have hooked is quite enough for this life time! :P :D) It tells me 'relationship secrets every woman should know' and 'how to dress to kill' and 'how to tell if he is really interested in you'.

Sometimes it shows me 'wedding planner' and 'how to have the perfect wedding' and 'where to order the perfect cake'.

Didn't I tell you? Google is overworked and stressed.

And before Rohit begins showing off explaining about  how the ads work, about using his social engineering  skills to crack passwords and several other IT related stuff  let me disclose, I have read, absorbed and understood this.

And just in case you didn't get it and did not smile at all after reading this post and are shaking your heads in bewilderment,  kindly see the labels on this post :P