June 29, 2015
From my column Sex and the city  that I write for Financial Chronicle every Saturday. 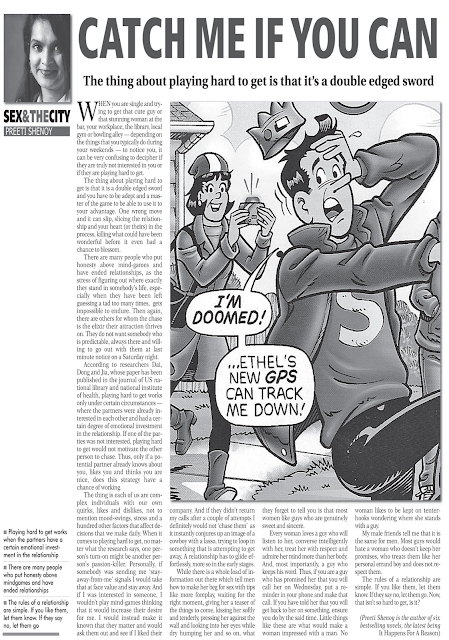 When you are single and trying to get that cute guy or that stunning woman at the bar, your workplace, the library, local gym or bowling alley—depending on the things that you typically do during your weekends-- to notice you, it can be very confusing to decipher if they are truly not interested in you or if they are playing hard to get.
The thing about playing hard-to-get is that it is a double edged sword and you have to be adept and a master of the game to be able to use it to your advantage. One wrong move and it can slip, slicing the relationship and your heart (or theirs) in the process, killing what could have been wonderful before it even had a chance to blossom.
There are many people who put honesty above mind-games and have ended relationships as the stress of figuring out where exactly they stand in somebody’s life, especially when they have been left guessing a tad too many times,  gets impossible to endure. Then again there are others for whom the chase is the elixir their attraction thrives on. They do not want somebody who is predictable, always there and willing to go out with them at last minute notice on a Saturday night.
According to researchers Dai, Dong and Jia, whose paper has been published in the journal of US national library and national institute of health, playing hard to get works only under certain circumstances—where the partners were already interested in each other and had a certain degree of emotional investment in the relationship. If one of the parties was not interested, playing hard to get would not motivate the other person to chase. Thus only if a potential partner already knows about you, likes you and thinks you are nice does this strategy have a chance of working.
The thing is each of us are complex individuals with our own quirks, likes and dislikes, not to mention mood-swings, stress and a hundred other factors that affect decisions that we make daily. When it comes to playing hard-to-get, no matter what the research says, one person’s turn-on might be another person’s passion-killer. Personally if somebody was sending me ‘stay-away-from-me’ signals I would take that at face value and stay away. And if I was interested in someone, I wouldn’t play mind-games thinking that it would increase their desire for me. I would instead make it known that they matter and would ask them out and see if I liked their company. And if they didn’t return my calls after a couple of attempts I definitely would not ‘chase them’  as it instantly conjures up an image of a cowboy with a lasso, trying to loop in something that is attempting to get away. A relationship has to glide effortlessly, more so in the early stages.
While there is a whole load of information out there which tell men how to make her beg for sex with tips like more foreplay, waiting for the right moment, giving her a teaser of the things to come, kissing her softly and tenderly, pressing her against the wall and looking into her eyes while dry humping her and so on, what they forget to tell you is that most women like guys who are genuinely sweet and sincere. Every woman loves a guy who will listen to her, converse intelligently with her, treat her with respect, and admire her mind more than her body and most importantly a guy who keeps up his word. Thus if you are a guy who has promised her that you will call her on Wednesday, put a reminder in your phone and make that call. If you have told her that you would get back to her on something, ensure you do by the said time. Little things like these are what would make a woman impressed with a man. No woman likes to be kept on tenterhooks wondering where she stands with a guy.
My male friends tell me that it is the same for men. Most guys would hate a woman who doesn’t keep up her promises, who treats them like her personal errand boy and does not respect them.
The rules of a relationship are simple. If you like them, let them know. If they say no, let them go.
Now, that isn’t so hard to get, is it?
____________________________________________________
Buy my books:
http://is.gd/preetibooks