February 01, 2015
So it is February!
I had asked you all on my FB author page whether I should do a blog marathon for this month or not--and I got an overwhelming response. So here we go. We're on. You will see a new post every single day on this blog, whole of this month.

Did I hear an applause? Well, thank you!

In the last post, I had mentioned the Times Lit fest and our session there. It took place yesterday and it was a brilliant session, with a crowd of more than 500 people!

Times of India covered it today. 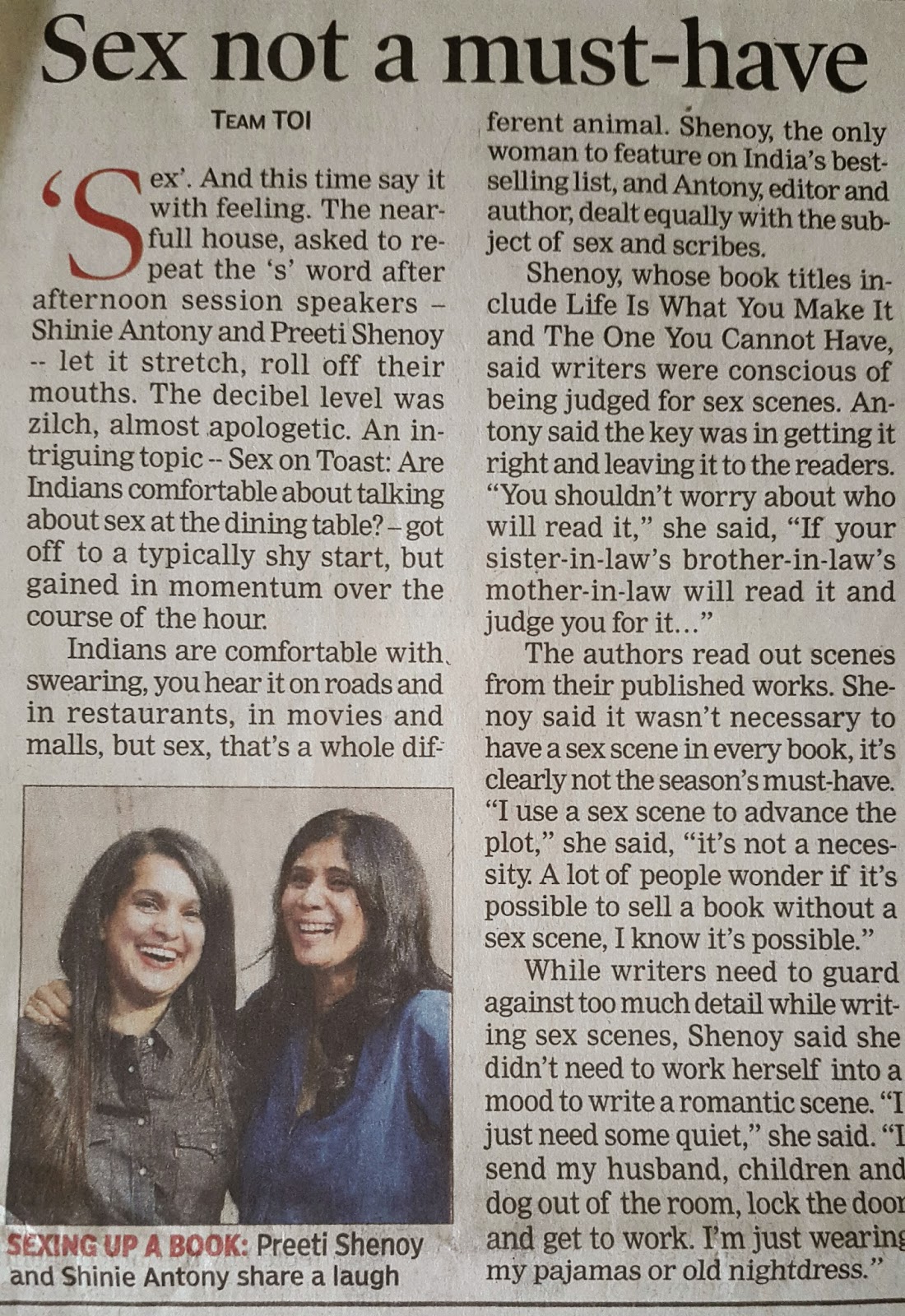 They had also featured me yesterday, where I had spoken about what lit fests mean to me. 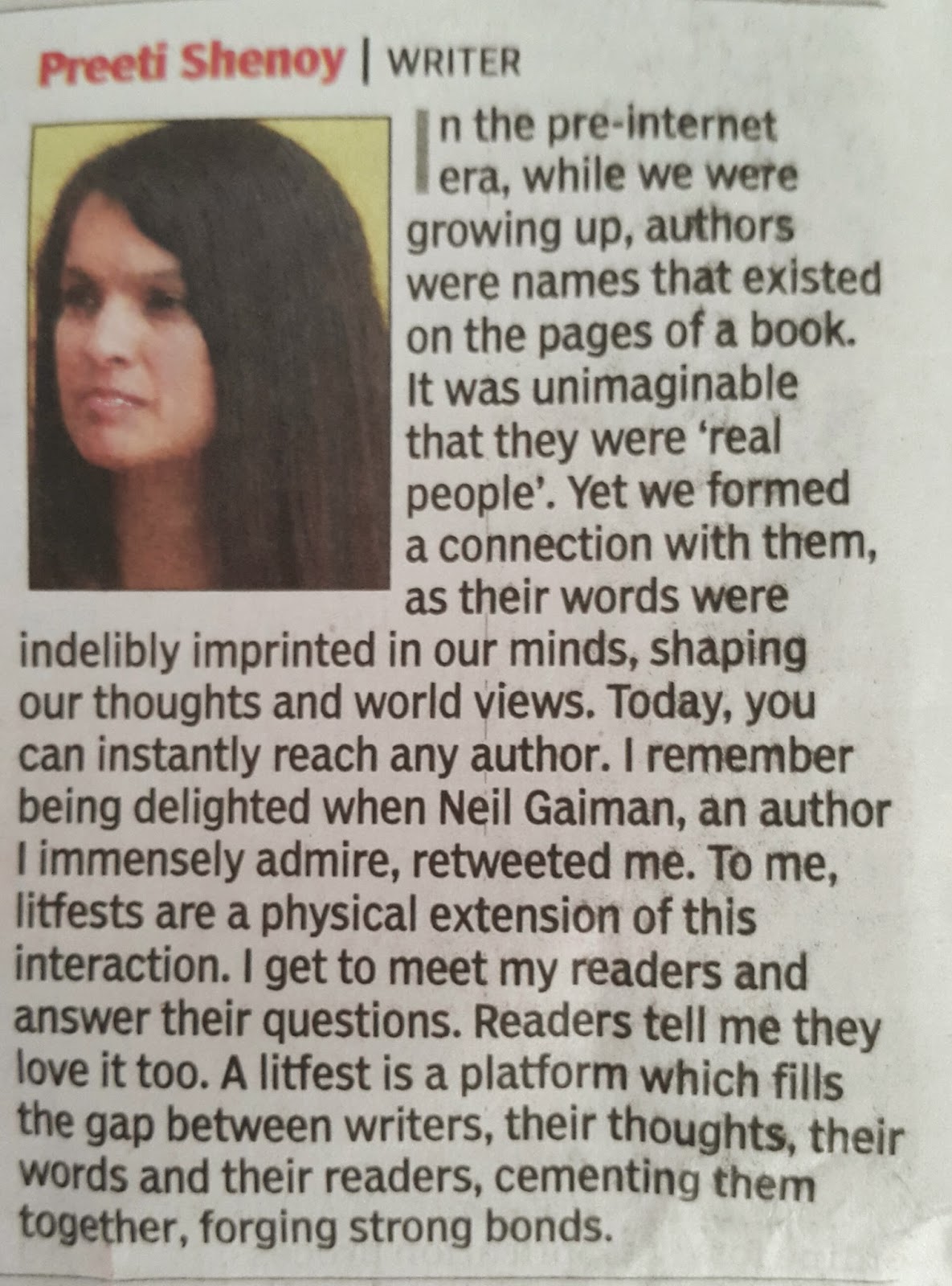 And last Sunday, I was also the 'author in focus'

Shinie Antony and I were in discussion with each other, and our topic was 'Sex on toast. Are Indians comfortable talking about sex?'

Shinie and I went to the same college and she is a writer I admire a lot. I absolutely love her kind of writing which is wicked, dark, cruel and extremely funny, yet poignant and sensitive.We are good friends, and she used to write the column 'sex and the city' which I now write. Shinie had also launched my book 'It happens for a reason', and apart from being a great friend, she has also given me really wonderful feedback and inputs about my writing.  She loved my book and I was delighted when she wrote me a long mail after she read it, telling me how much she enjoyed it.

We reached the venue , Jayamahal palace and the atmosphere was festive with a lot of book stalls with all kinds of books and a huge hoarding  of the schedule  of sessions which promised to be interesting and fun. 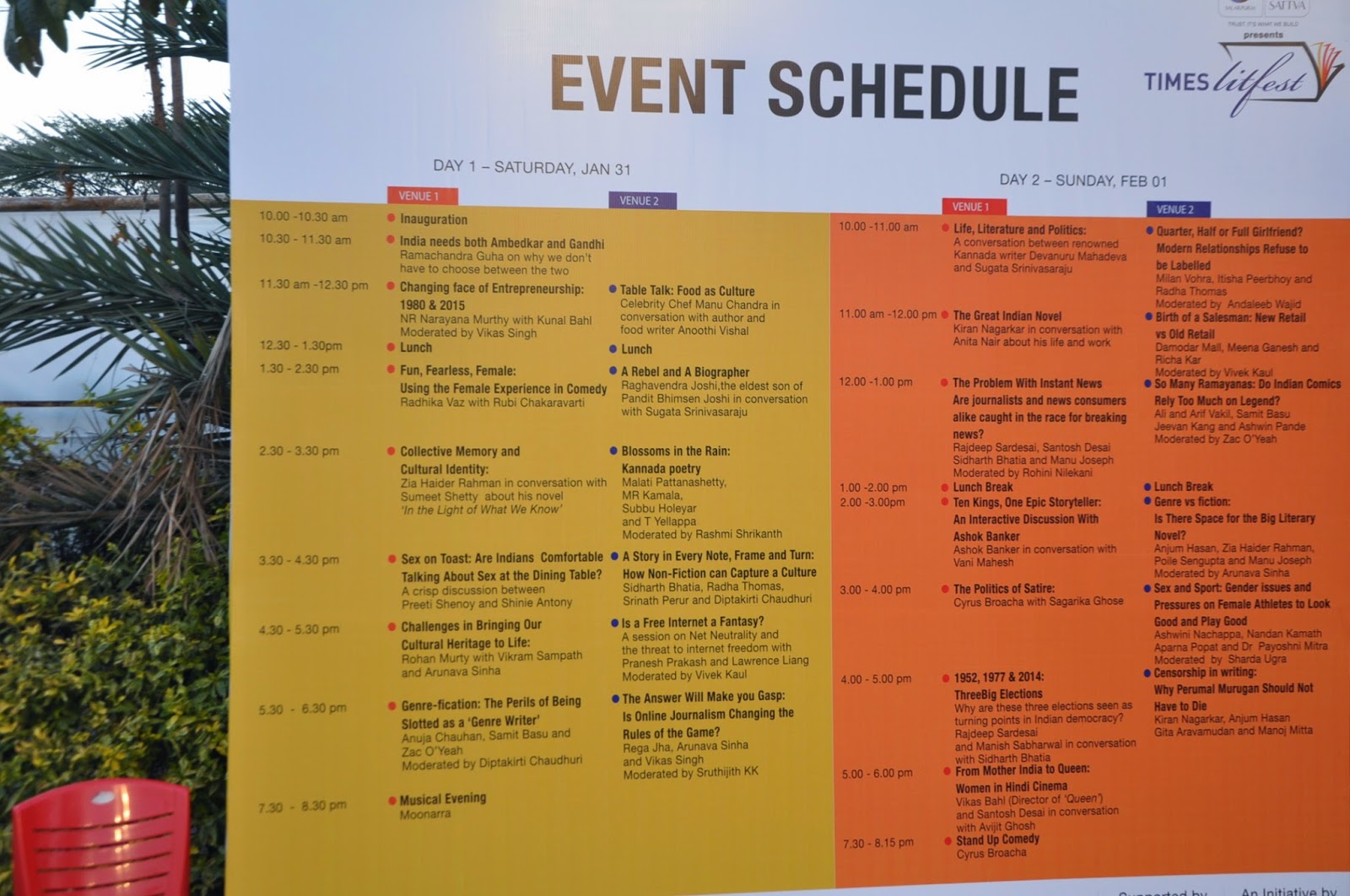 We were straight away whisked to the authors lounge, which is where all the authors hang out, before their sessions. Then we were led to the stage and introduced. There were two giant screens on either side as the hall was huge. This picture gives you an idea of the setting and how large it was. 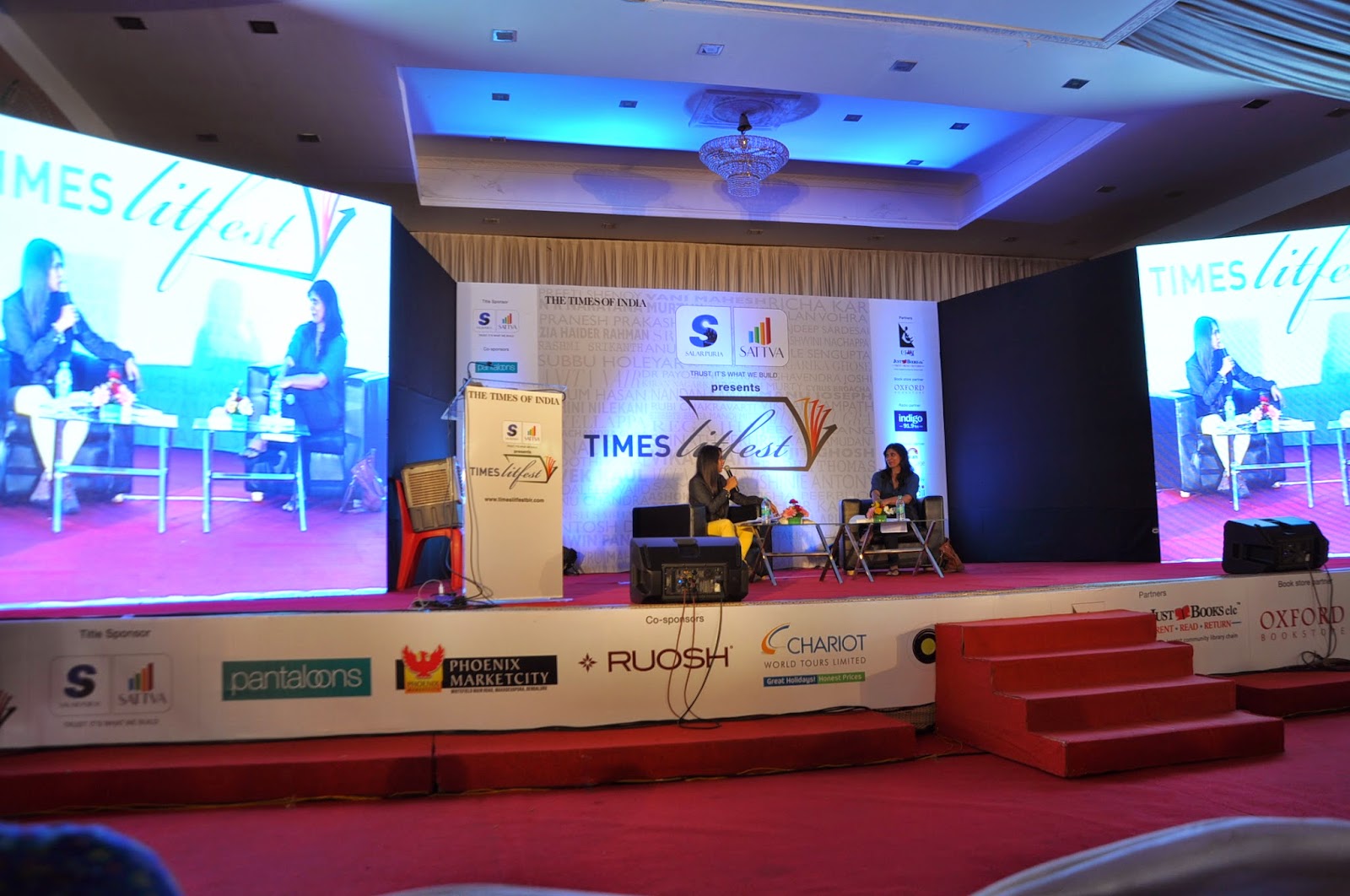 We were told that our session was hilarious and also very insightful. Lot of messages have been pouring in on twitter and FB, congratulating us for such a wonderful session and telling us that it was a roaring success.
I have also been asked to share a little bit of what we discussed.
It would be impossible for me to capture all that we shared, as it was a session which was an hour long. So here are the 'highlights' of  some things we spoke about.

Shinie: Preeti, your characters ‘make love’ or ‘have sex’?


Preeti:  I think if it's a man, he has sex. if it is a woman, she makes love :) Inside every grown guy is a struggling adolescent, waiting to hit first base, second, third and then home.
(The audience erupted into laughter when I said that. I think they could relate)
What about your characters – do they make love or make out?


Shinie: No making out, no making love. They are sexually dysfunctional and just lie there like frogs on a dissection table, thinking, mmm but the brochure looked so good.
(More laughter from the audience)


Preeti: I get asked this question a lot--and so I wondered how is it for other authors: When you write a book, are you worried or concerned about what your immediate family, friends circle etc will think? Especially when you write candidly the 'hot scenes'? Are you afraid of being judged?


Shinie: Best to keep professional and personal lives separate. Like those men in ancient times who carved nude women all day and then go home and bash their wives. Writing about sex is very technical – just like writing about cancer or graveyards. You have to get it right. Don't worry about your sister-in-law’s mother-in-law’s brother in law reading it.


Shinie: What about you? Are you conscious of your readers while writing hot scenes?

Preeti: If I was conscious I would never be able to write. I really switch off from everything while writing it.


Shinie: Which book of yours did you first write about sex?


Shinie: Barefoot and Pregnant, my first book. Every woman in it has the hots for a rat. Not the bad boy on a bike, but the morally ill man.


Preeti: In a relationship do you think sex changes the equation differently for men and women?


Shinie: The language of sex is sexist. A man takes a woman. A woman gives herself to a man. But there are things men and women do equally well - stalking pining texting dumping.


What do you say, Preeti?
I so agree.If a man does sleeps with many women, he is a studboy , a hero. If a woman does the same, she is a slut, a whore and so many other things. There are a lot more derogatory words for a woman than for a guy.


Shinie: Your books have strong female characters and equally strong male characters. In your latest book the heroine is an unwed mother, an animal minder and a fitness expert. When you write about intimacy do you write from the man’s point of view or the woman’s?


Preeti:  It depends entirely on the book. The book 'The One You Cannot Have'--60 percent of it is written from a male perspective, in the voice of Aman. So naturally the sex scenes were from a man's POV too. I was hounding my male friends constantly, asking them whether it I had got it right and I was asking Satish too. At one point I was so much thinking like a man, that I was telling my women friends that I might make a pass at them :)  What about you?


Shinie: I try both. Because men AND women can act like retards when it comes to sex.


Shinie: When bodily fluids have to be accommodated. I hate to know where THAT went. I once evaluated an out and out infidelity manuscript. But the logistics stumped me. It said the woman opened the hotel room door while drinking tea and they do it on the doormat. What happened to the cup in her hand? Did they shut the door? They seemed to enjoy it, I just couldn’t. I kept thinking a waiter is going to walk past and need medication all his life. Then the couple moves a little into the room and do it standing. I'm like you need a wall for support. The book got published though I told them none of this is physically doable. Every day I think someone has read the book and damaged his lower back today.


Shinie: Do Indians talk about sex at the dining table? I think they do – when they are not having sex on the dining table. You need to use the dining table for something! So do you think we are a repressed, suppressed society, still struggling with our sexuality?


Preeti: I think we are. We do not give sex the respect it deserves. Popular songs and many movies reflect this.


Preeti to Shinie: What do you think about the 'bad sex in fiction' award? The given rationale for the award is "to draw attention to the crude, tasteless, often perfunctory use of redundant passages of sexual description in the modern novel, and to discourage it." How would you feel if you ever won such an award?


Shinie: I’d throw a party. So I am not writing the sexiest, at least I am the funniest. I may not turn you on, but I made you laugh.


Shinie: Do you play any particular music when you have to write a love scene? Light a candle? Do you have to get into the mood?


Preeti: No scented candles, no music. All I have to do while writing (and not just sex scene) is usher my husband , children out of the house and my dog out of the room. I would probably be in my old pajamas and would be at my key-board furiously typing away.

The above were some of the things we talked about. In case Times of India uploads a video, I shall share it here.

Shinie and I had a total blast and so did the audience!
Here is a picture of both of us, after the event. 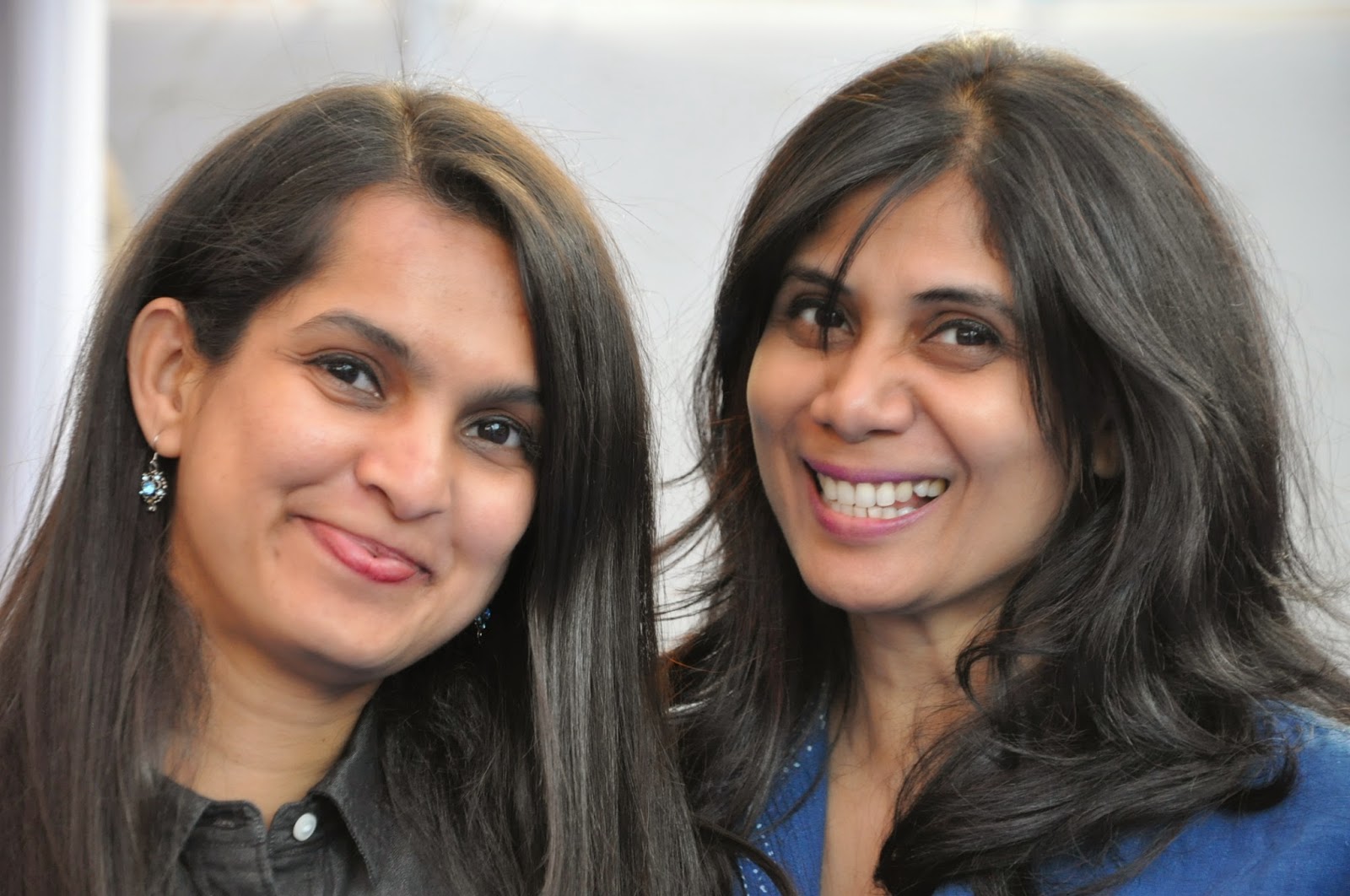 I shall be back tomorrow, with a new post.
Till then, do leave me lots of comments on this one! I would love to hear from you.

Ps: My latest book 'It happens for a reason' is no.7 on Nielsen bestseller  list! Click on the title to buy it at a great price.