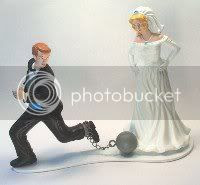 Sometime back, there was a really heated discussion going on about whether marriage is an over-rated Institution. The entire debate was in trigger to this post which appeared in womens web. IHM took it up in this very interesting post. Shail blogged about it here.  Ritu stated her views here.Ruchira wrote a very thought provoking post here.
Initially, I wanted to write a post about it as well. But when I think about it, I do agree with most of what was expressed in Womens web and almost everything  that Shail said. Yes, Marriage is indeed an over rated institution . (And who wants to be in an institution really?! :-) )
Personally, I have been extremely fortunate to be married to a great guy. We have been happily married for 16 years now and the fact is, I am still in love with him.(touch wood). He means the world to me. We still call each other and text each other, we tease each other, have discussions and I know I can depend on him, no matter what. I indeed feel blessed to be married to him.
But, not everyone is so fortunate. When I look around me, most people who have been married more than five years or so, feel stuck . But they ‘adjust’ and ‘compromise’ and carry on. (Not just the women, the guys too). Sometimes the issues in a marriage are not ‘big enough’ for a divorce. But they are a real  irritation, nevertheless. (and please do not say—everything can be resolved by talking. If so I would ask you to be honest and tell me how many years you have been married and how many issues you have ‘resolved’ by talking :-) ) Mostly couples ‘adjust’ because there are kids involved, societal pressure involved, ageing parents involved. Some might argue that marriage itself means ‘adjustment’ and 'compromise.' They might argue that one needs companionship in old age. Is marriage the only way to have such a companionship? I definitely do not think so. (What if your spouse dies?)
Let us take another aspect of marriage. Does marriage mean loss of freedom?
Most definitely  YES. One has to accept that marriage certainly comes with boundaries and terms and conditions.(Often in invisible fine print).
A friend I was speaking to, who is very creative and who used to be so passionate about his hobby, shook his head sadly and said “After marriage, everything changed. I had to change so much as a person.”
“But why?! That is so sad. How can you give it up?” I asked, not understanding.
“Arre—she does not like it and I do not want any jhanjhat,” he said.
Many people I know, accommodate their spouses demands (whether reasonable or not) for the sake of peace in the house. Imagine a guy or a woman coming home after a hard day’s work and the spouse goes on and on about an issue. Most people would just quietly do whatever the demand is, rather than fighting it out. They do not want to rock the boat.
Now, some people do not mind this loss of freedom. They see it as ‘an adjustment and a compromise’ essential for survival of marriage. Some people resent it a lot and a myriad other issues that crop up when two people are living together and ultimately it leads to the breakdown of marriage.
Whether you think marriage is an over-rated institution or not, all boils down to how important your individual freedom is to you and what you really expect out of a marriage and how much you are willing to 'compromise and adjust'.
Many couples share their email accounts and their passwords too. The spouse is ‘not allowed’ to have friends of the opposite sex. If a friend is of the opposite sex, then they cannot call you, text you, mail you, unless the spouse also reads it. Now to some, it may not sound like a ‘big deal’. (What is there , after all we are married and we love each other.)
But to others, like me, it sounds like a death sentence.
In my case (fortunately), there is complete trust and we do not share our passwords and nor do we read each other’s texts. My husband does have his own set of friends (both men and women) as do I. We also have our common set of friends. I most definitely believe that is healthy and essential too. But my husband still remains the guy whose arms I would wrap myself in, when the rest of the world does not understand. (yeah, I do completely adore him and am a sucker for romance and such mushy sentimental 'crap' :-) )
But coming back to track, Marriage, to me, certainly does not mean losing one’s individuality. You still are the person you were, before you got married. If I had to completely change myself, just to keep my spouse happy, I doubt if my marriage would have lasted this long.
But having said that, I must also say this-- If you are happy sharing passwords, reading each other’s texts and being joined at the hip, who am I to object?!
To each their own. Whatever works for you!
If you're happy ,may it stay that way. If not, maybe it is time to think.