Today one more year gets added and the journey completes 16 years. Gosh--that is a long time by any account! It just feels like six months not sixteen years and I am truly thankful for the freshness our relationship still retains. (and I admit publicly, full ten out of ten to Satish, and maybe only  two to me :P that too, the two marks are for the nonsense I do, which makes him laugh (okay most of the time :P ))

In case you are still wondering what I am talking about, we celebrate our 16th wedding anniversary today. If I ask Satish what it is that he loves most about me, he would probably say that it is my ability to surprise him, even after 16 years, with crazy, wacky, fun stuff. He will probably also say it is my child-like enthusiasm for almost everything. Many a time, I excitedly tell him something and he sits there as calm as a Buddha, while I am dancing around, arms waving wildly, eyes shining with eagerness and asking him "Isn't that great? Isn't that wonderful?" He smiles indulgently. Secretly I am glad that he balances out my personality completely. I can depend on him, no matter what and he will always come through for me. He also understands me perfectly and know me inside out. That is what I love most about him.

16 years back, when we were newly weds (and still getting to know each other's quirks, he didn't know what a devil I was :P :-)) we had gone to Kodaikanal  for our honeymoon.(I find the word absurd but its etymology is interesting). We were staying in this nice hotel (well, even if it was a shack, it would still have seemed amazing  because you know how it is, when you're just married). There was a long corridor at the end of which was our room, our 'honeymoon suite' located so for discreet privacy. There were several rooms (at least 15) before ours.We were told  by a giggling concierge that the floor was full of honeymoon couples.

I remember still the acceleration of my heart as a devilish plan hatched inside my mind. I looked at my handsome husband's angelic face. The plan was becoming clearer and clearer and the temptation was too strong to resist. Like Usain Bolt, I shot out and before Satish realised what was happening I had successfully rung all the 15 doorbells of the room preceding ours and I had run into the safety of our honeymoon suite (I was the one carrying the key and I had opened it in a jiffy) and collapsed on the bed laughing. Satish ,for a few seconds, had no clue what had just happened, but he fortunately realised within a few seconds that all the honeymoon couples in those rooms would soon be opening the door and would find him standing there. Within a  few seconds of that realisation, he had done an Usain Bolt too and had joined me, collapsing in laughter on the bed, like two little children who have just played the greatest prank on earth and not got caught.

I laugh to this day, imagining all those people who must have opened their doors (who knows after hurrying to get dressed, perhaps :P ) to find no-one outside. My apologies to you, if you were celebrating your honeymoon in  Kodaikanal in 1995 and you opened the door to find nobody outside. I confess it was me. :-)

Since then, we have done many more crazy things together.Some of them are truly scandalous and this blog is read by my friends children too, hence I cannot mention them here. We still talk about them and we still  collapse with laughter, when we talk about it.

I think the sweetest thing about a relationship are memories. Especially of laughter, especially of the good times one has had. If they far outweigh the fights and the low point which any relationship hits, then you have a good thing going.

I know. I speak from experience.

Satish was out of town and he is on his way back from the Airport as I type this. I have dressed up specially for him. Yeah, I am still the eternal romantic and old habits die hard. What I plan to do is hide behind the door and shout BHHHHOW and leap at him , just before he rings the door bell. :-D

I am chuckling madly as I type this and wait for him. We would be going all by ourselves (leaving our two children at home who are urging us to go out) to a nice place for dinner.

So see you tomorrow, I must go for I have a mission to carry out--creating happy memories of a special day. 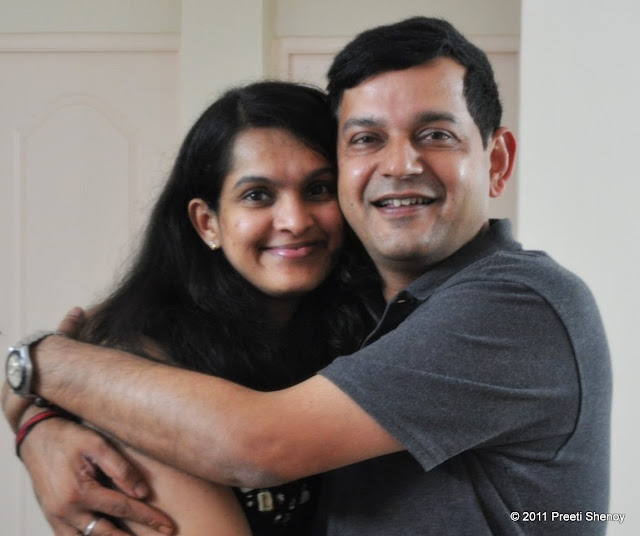