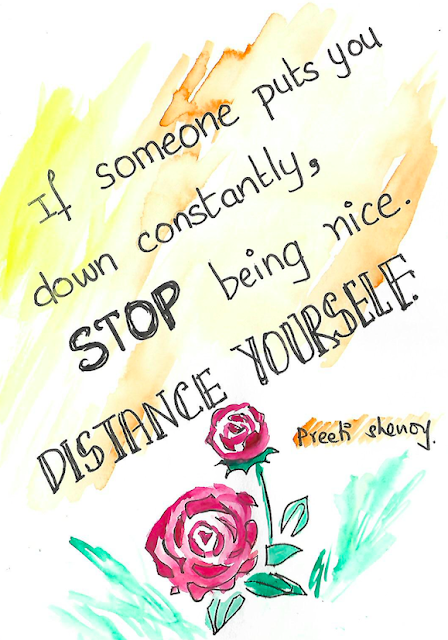 Most of us have been raised to 'be nice' to others. We have ingrained it to such an extent that we know no other way. Even when someone puts us down, we second guess and say to ourselves 'Maybe they didn't mean it that way..Maybe I am over-reacting'.

Here's the thing: If you felt bad about something that someone said, what is important is not how they meant it, it is how YOU felt about it.  People make disparaging remarks, out of envy. Sometimes, they are veiled. They are not direct references.

I remember one time when I had made an extra effort to dress up well, to meet a friend. She greeted me and enthused about how stylish I looked. Then in the very next breath, she went on to tell me about how my ear-rings did not match what I wore as a pendant or some such thing. I told her it was my choice, and that was the way I liked it. I closed the topic. Another time, I was telling  another friend, about how I wore only sarees to an International lit fest, as I was representing India. That person immediately made a reference to her friend, who did that at an international conference and someone told her that 'It was too much and she was overdoing it.'   I found that veiled reference  and indirect put-down interesting.
I don't think anyone has the right to comment upon other people's choices! How they dress is upto them.  If you do not approve, you can look the other way.
I detest unsolicited advice on the sartorial or any other  choices that I make.