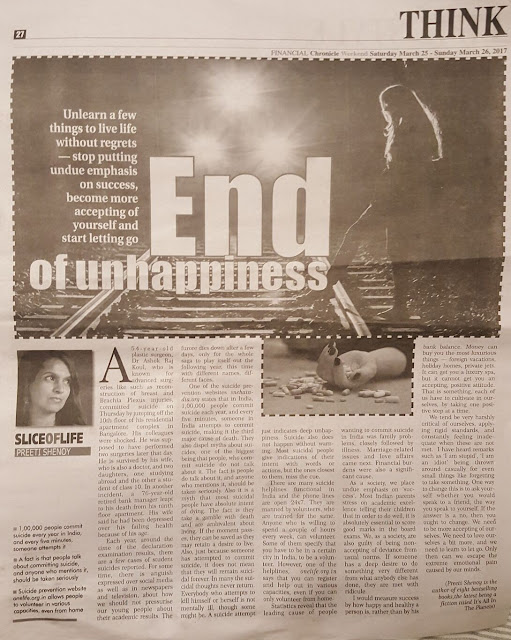 A54-year-old plastic surgeon, Dr Ashok Raj Koul, who is known for advanced surgeries like such as reconstruction of breast and Brachia Plexus injuries, committed suicide on Thursday by jumping off the 10th floor of his residential apartment complex in Bangalore. His colleagues were shocked. He was supposed to have performed two surgeries later that day. He is survived by his wife, who is also a doctor, and two daughters, one studying abroad and the other a student of class 10. In another incident, a 76-year-old retired bank manager leapt to his death from his ninth floor apartment. His wife said he had been depressed over his failing health because of his age.

Each year, around the time of the declaration examination results, there are a few cases of student suicides reported. For some time, there is anguish expressed over social media as well as in newspapers and television, about how we should not pressurise our young people about their academic results. The furore dies down after a few days, only for the whole saga to play itself out the following year, this time with different names, different faces.

One of the suicide prevention websites snehaindia.org states that in India, 1,00,000 people commit suicide each year, and every five minutes, someone in India attempts to commit suicide, making it the third major cause of death. They also dispel myths about suicides, one of the biggest being that people, who commit suicide do not talk about it. The fact is people do talk about it, and anyone who mentions it, should be taken seriously. Also it is a myth that most suicidal people have absolute intent of dying. The fact is they take a gamble with death and are ambivalent about living. If the moment passes, they can be saved as they may retain a desire to live. Also, just because someone has attempted to commit suicide, it does not mean that they will remain suicidal forever. In many the suicidal thoughts never return. Everybody who attempts to kill himself or herself is not mentally ill, though some might be. A suicide attempt just indicates deep unhappiness. Suicide also does not happen without warning. Most suicidal people give indications of their intent with words or actions, but the ones closest to them, miss the cue.