How to save a bad relationsip 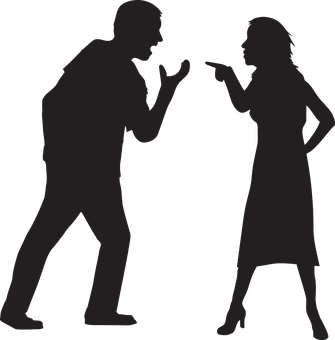 Amongst the thousands of posts flooding the social media, a very catchy GIF caught my eye. I shouldn’t have clicked on it but I did and then I got sucked into that black hole of the Internet, where time and you both disappear, only to emerge many hours later, to discover that absolutely no work has been done and your brain now filled with useless information like who vacationed where, and what the Biriyani tasted like at someone’s wedding, and the picture which someone’s child drew.
But, the saving grace was that this GIF that I clicked on was not entirely useless. It talked about saving a marriage.

It told us the story of a couple that had been married for long, who were now fighting, all the time. There was a lot of negativity between them. The wife criticized anything that the husband did or said. Anything that the wife said, the husband pounced on her. The relationship had soured to an extent where it   showed no signs of improving. After months of this domestic war, the man got tired of this and decided to do something about it.  In the depths of despair, inspiration came to him, when he realised that he couldn’t change his wife and that he could only change himself. When he woke up that morning, he asked her ‘What can I do to make your day better, today?’
She was suspicious and cynical, and asked him why would he want to do that. He repeated his question, saying that he wanted to make her day better, and then he asked again, till she exploded in rage, saying ‘If you really want to do something, clean the kitchen.’ Wordlessly the man did it.
Each morning the man asked the same question, and every time the wife came up with a new task that had to be done around the house. He did it cheerfully, without any complaints. Sometime during the second week, when the man asked the question, a miracle happened. The wife burst into tears and told him to stop asking her that. She admitted that he was not the problem, but it was her. She was difficult to live with, and she told him she did not know why he still stayed with her. He lifted her chin gently and told her it was because he loved her and he wanted to be the agent of change.  He then asked her what he could do to make her day better, and she told him that maybe they could spend time together. He told her he would love to.
From that day onwards, their relationship changed. His wife started asking what she could do for him. It wasn’t that they never ever had a fight again. They did. But when the disagreements cropped up, they were able to resolve it with love and understanding. The man says that decades later, they are still together, and every once in a way, one of them will roll over, and ask the other what they can do for the other person.
This story—I have no idea whether it is a fact or a product of a writer’s imagination--- sounds very nice, almost too good to be true. If it is true, the guy who saved his marriage, by doing this should be conferred sainthood!

One of the hardest things to do is to be deliberately nice to someone who is being unkind or unfair to you. But the key thing here, and in all relationships is that we are powerless to control the behaviour of others. We can only make changes within ourselves. We can tweak what we say and how we say it. We can adjust and fine-tune our body language and our tone. But this is possible only if there is deep love, and there is a genuine desire to improve things.
To make a change in a relationship, which is mired in sarcasm, angry, words and indifference would require super-human effort from the person wanting the change. The wounds of the past cannot easily be washed off . Building love and trust is a long process. Unless the couple has made huge investments in nurturing the emotional bonds in the relationship, which can happen only over time, small actions like mowing the lawn and cleaning the kitchen would remain just token gestures, confined to feel-good stories which go viral on the social media.

No matter how bad a relationship is, there is always hope.