And to all others who commented too

But it still means that second post on Car adventures will have to wait a bit.
(but watch this space, as they say in those adverts) 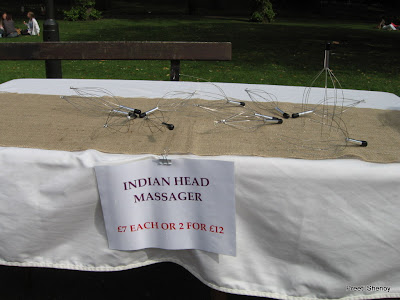 I clicked this picture here in the UK, at a park near my place where there was a fair going on. They had tables where each table was selling different things from different countries. I stopped in surprise when I came to this particular table. I have lived in many different parts of India for nearly 36 years and never once have I come across this strange contraption which they claim is an Indian head massager! (click on photo to enlarge) You're supposed to hold it by the handle, in an inverted position on your head and move it up and down!! I really think it ought to have been named 'U.K.Head scratcher' not 'Indian Head massager.' :) and to top it, each piece costs 7 pounds which is 514.94 Rupees (as per latest exchange rates).

What do you say to that?!
Can you think of more uses for it for Rupees 514.94? :-) Put on your creative thinking hats.I'll give you an unusual use I thought of, provided someone else also does not think of it. If they do I shall surely mention it when I update this post tomorrow with names of those (with links to their profiles) whose uses I think were outstanding. :)

A big round of applause for all those who gave very creative answers.

The clear winner who gave the most creative answers is
Guruprasad of Guruprasad's musings and more : He gave the maximum number of uses and very nice ones too.

Only one person gave the exact use that I had thought of, which I thought was quite unique, but I guess he and I think a lot alike. He is

Ajay Chauhan : I had also thought that it could be used like Edward Scissorhand's contraption and he mentioned Wolverine. The other thing he mentioned about some reflective optical thing sounded good too :-)

Other people whose answers I liked are Geetha , Hunter and Meira.

I can think of a few other uses too which no one has mentioned here. If you are below 18, please stop reading and leave now :-)

1.Two straps can be attached to both and it can be worn as an Outift to the Oscars a'la Madonna's conical bra or Cher's outfit that created a stir a few years back. If you don't know what I am talking about, please google.I am not explaining.

2. A small motor can be attached and it would make a good you-know-what. I am not explaining this too. :-)

3. Tie a cloth around it and put some beads inside it--an innovative rattle. Nothing adult here--stop looking for it!

4.Stick photos on each arm and an unusual photo display frame that would suit a modern minimalist interior.

5. Mixing a large tin of paint with turpentine--This would be vey handy when its arms are closed.

6.Keep it at a 180 degree angle and dangle ties over each arm--Tie tidier.

7.Use an arm to stir coconut oil that has become a solid because of low temperatures :-)

8.Wool tidier. Use each arm to store your balls of wool. Very useful gift for granny.

9.Use one arm to put the rubber strap back into your Hawai chappals when it comes out. Very handy indeed!

I can think of more--but I am quite sure these are enough :-)

Thank you folks for all the answers! Stay tuned more such thinking challenges. :-)