May 28, 2009
A few days back, we were out on a picnic at a place called Lenwade ( which is known for its array of museums, cathedrals shops and theatre apart from its landscape that seems like it has been snatched out of a 18th century English painting ) with friends who were visiting from India. We were waiting for the bus and we had a good twenty minutes to kill. The scenery was truly picture perfect but there is only so much of perfectness you can take and I began looking around in a distracted sort of way, having run out of conversation with my friend, partly on account of having husband all ears in the hearing vicinity and partly because we had been chatting non-stop ever since she arrived which must have been one massive talkathon (If there exists such a thing—if it doesn’t, it gets invented whenever two good women friends meet) of 48 hours even if you discount the time we took to catch up on sleep, which really wasn’t much (the time that we took to catch up on sleep that is, not the talk time).
That was when this really attractive fellow caught my eye. I did not even realise that I had been staring—so gorgeous was he, till my friend nudged me and said “ Gosh, wherever you go you manage to find one.” I remembered my other good friend back in India who used to also be my next door neighbour. This is the same friend that I mention in my book in the ‘Sylvester Stallone’ incident. This friend and I had developed our own system of rating gorgeous guys or movies or even women we thought were worth rating.
We used to often stand on our balconies, taking a break from our routines, sipping tea and idly looking at guys who were taking smoking breaks and as our apartments were situated behind a row of multi storied offices we always had a huge selection to rate.
Her favourite question used to be “Out of ten how much?”
We’d both assess the guy in question and rate him. She always gave 8 or 9 to the long haired guys and I’d give the long haired ones a 3 or 4—i definitely preferred army crew cut to Michael Bolton wannabes.
This one whom I had been inadvertently staring at, was definitely a 9.5. Maybe even a ten. He was that good. I had a mad urge to call up my friend in India but I looked at the watch and realised it would be past ten at night and it was definitely not a good idea considering her husband would be home (Ah the things we married women have to do to communicate to each other) and that too this guy was a ten on my scale, not hers. So I refrained the urge and continued gazing at him. (Come on—we have all done it. Admit it. Nothing to be ashamed of!)
That is when he turned and looked me straight in the eye. An unblinking, unapologetic ,unwavering gaze. I was the first to break eye contact and I looked away, quickly checking to see if anyone had noticed. Fortunately the kids (both mine and my friend’s) were busy eating ice cream. Husband was wiping away a spot of ice cream that my daughter had dropped on her coat. My son, my friend and her friend’s children were oblivious to what I was upto. I was doubly glad that I had opted to not eat ice cream else, like them I might have missed this little moment that was making me deliriously happy like a giddy teenager.
He had turned away by now and was busy examining a car. Typical male, I thought. I don’t know what they find so interesting in cars anyway. He was engrossed in it. And he was examining the bumper of the car. He looked really irresistible, being so absorbed like that.

Then I did something that I just had to. I agree it was a little impulsive of me but I was certain he wouldn’t notice or mind even if he noticed .I clicked a picture of him! Want to see it? Scroll down. 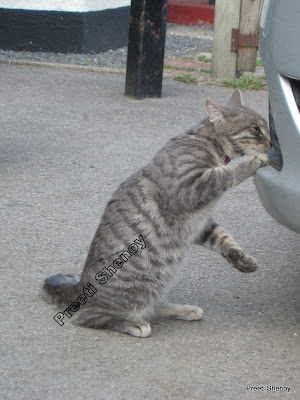