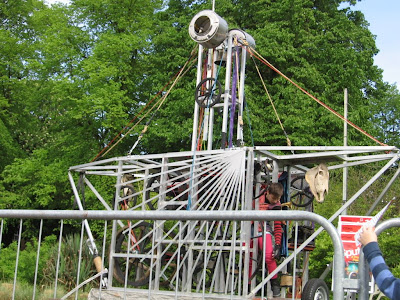 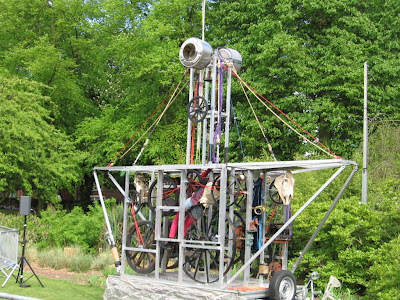 In scale and magnitude, in ambition and grandeur, in showmanship and co-ordination, in organisation and splendour, there are very few events in the UK, that match the prestigious annual Norwich and Norfolk festival. In fact, according to Jonathan Holloway, the festival director, this festival is among the top five in the UK. This year it is taking place at multiple venues across the city from May 1st to May 16th. I am fortunate to be living here, that too very close to most of the venues. I have had the opportunity to witness some of the most creative, dazzling and inspiring performances, street theatre and works of Art. For more information and some brilliant photographs which give you an idea about what exactly I am talking of, you must, must see this.

One of the events that I liked, was “Sputnik—a project of possibilities”.( The pictures you see above are the ones I clicked at this event )

It is hard to explain what exactly it is. It is a performance blended with a kinetic sculpture that explores the possibilities of flesh and steel, when it is blended into the imagination. This is what the handout says:

A young woman Jane Janes (click on it to see her blog) seeks to live away from the Earth. “It is becoming impossible to live on the Earth, I have no wish to die, especially not now, but I do have a wish to live elsewhere. Therefore I will develop a machine for living away from the Earth.

If my machine has endless possibilities and is powered by not just my body but my spirit, given the right place and right time, my life could begin again.

It is just a question of how you look at things”

The performer on a specially created machine was a lady called Claire Cunningham who really brought Jane Janes to life.

The concept was so different from what I had ever seen before. The Kinetic sculpture when it began to move, and when the wheels began to rotate, setting in motion, many other wheels, and the wing like contraptions began to flutter, along with the music and Cunningham’s performance, you were transported to a world of possibilities.

Later I thought about it. It is amazing how much we can achieve when we open our minds.

Think about it. Most of our imaginations are fettered and bound by daily lives, by mundane routines. Numbed by television and images force fed by Multimedia , i-phones and high speed Internet, somewhere the imagination gets suffocated—mostly it dies. Sometimes it survives.

Carl Jung said “Your vision will become clear only when you look into your heart. Who looks outside, dreams. Who looks inside, awakens.”

Free your spirit. Think about your desires. Look inside yourself.

The possibilities are indeed endless.