June 24, 2013
My daughter who is 12, was given a project in her class. She had to present any gadget with modifications which she wished existed. She could either take an existing gadget and write about the features she wished it had,  or she could think up of an entirely new gadget.

Of course, she chose the latter.

She invented something which she called the AI-1 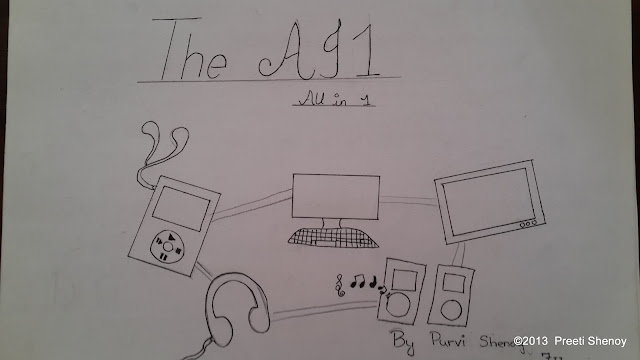 This was the cover of her project.

And here is what was inside: 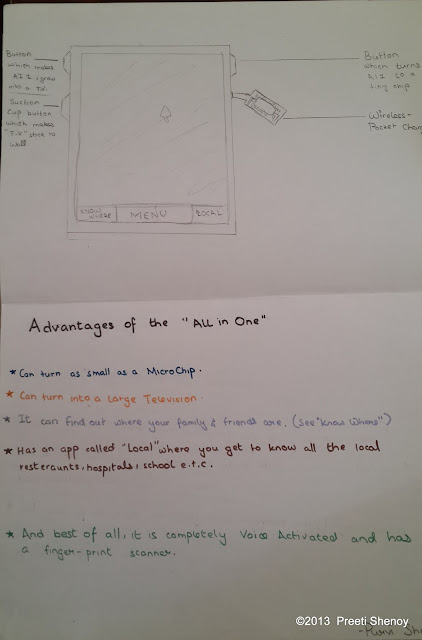 I thought it was really creative and clever. On the right side, you can see that she has drawn a button--if you press it, the gadget turns into a small micro-chip. On the left side there is another button which if you press, it turns into a giant television with suction cups which you can then fix on a wall and watch. It also comes with a mini-pocket charger.  She has explained the other features of the gadget , as you can see.

When she came home from school, I asked her whether she presented her project and what the teacher said. My daughter just shrugged and said that the bell went before her turn came, and it would probably come in the next class.
'Never mind. You can always present it later,' I said.

But my daughter said that she was going to make a new one.

'Why? This is so good, original and clever,' I said.

She replied that another student had presented something which did not exist in the real world, and the teacher felt it was too 'virtual'. (sic)

So my daughter felt she would say the same about her gadget too.

I didn't know what to say.