Love, friendship and a meeting

June 09, 2009
Hrishikesh Raghavan is the kind of guy who calls a spade a spade. He called me yesterday. Oh no, he did not call me a spade—called me as in a real ISD phone call. All the way from India. (Yeah, it always melts my heart when people call ISD, especially from India). A long phone call—we talked and talked. I felt so good.

Did I hear you ask Hrishikesh who? I guess I forgot to tell you about him. Hmmm—where do I begin? I could tell you that he is a driving enthusiast or a Motoring enthusiast who has done more number of miles in off roading events than the number of times you or I have had haircuts in our whole lives :-) [ In case you don’t know what Off roading is click on link] And in case you still aren’t impressed and want very minute and exact details see this, this ,this,this, this and finally the Golden quadrilateral drive which was done in just 4 days. Hrishikesh is big on cars (biased towards Tata vehicles he adds) having driven about 42000 km in an Omni, 97000 km on the Indica (so far), 67000 km on the Safari (so far). You’d be forgiven for thinking that is all he does. No—like the rest of us, he does have a full time job and is in a senior level position in a leading global IT company.

Funny thing is the image of Hrishi ( when you've known him for as long as I have you're allowed to call him Hrishi :-)) that is frozen in my mind is that of a 17 year old, tall lanky lad. That might be because we went to school together and then lost touch for about nineteen years. Then one fine day, thanks to the Internet and all the batchmates reunited sites, just as suddenly as we vanished out of each other’s lives, we were back in touch again. A quick exchange of mails led to an exchange of phone numbers. I was living in Bangalore at the time and he was in Chennai. So we spoke occasionally on the phone and I remember thinking he still sounded the same. His sister who was our junior at school, was in Bangalore at that time and she dropped in for a meal one evening. It was fun catching up.

Then I moved to Pune and ironically Hrishi moved to Bangalore. So we still didn’t meet. But we kept in touch through our alumni association of our school which is very active. Then one fine day, on a Sunday morning I get a call from Hrishi saying he is in Pune and whether we could meet. But it was too short a notice for me and my diary for the day was jam packed. He was staying at the other end of town and was going back early next morning. So we made loose plans based on a thousand contingencies which left as remote a chance of meeting as Australia has of winning the T-20.

I was dropping my daughter to dance class and had to pick her up in an hour and fifteen minutes. I suddenly get a text from Hrishi saying he was on MG. Road and which part of the city was I in? I was just two kilometres away from him and wonder of wonders (unlike Australia winning the T-20 this time) we managed to meet after a dozen frantic phone calls of ‘where are you’, “I can’t see you yet”. Being a Sunday, MG Road in Pune gets converted to a walking plaza and all vehicles are banned and the atmosphere is very carnivalesque. We managed to locate each other guided by the Giant bouncing castles (there were two of them to cause confusion on a 1 kilometre stretch). I had no idea how Hrishi looked like now, as we had not exchanged any photos and the last we saw of each other was nineteen years back. I didn’t know how I would recognise him, but I knew I would.

Then I saw him waving out to me and it was truly a oh-my-god-look-at-you moment for both of us! He still looked very much the same except for beginning to resemble George Clooney in a stylish way. The first thing Hrishi said as soon as he saw me was “ Wow !My sister was right. You look like a model!” That was one of the nicest things I have heard ever since I gave birth to two kids. You don’t hear lines like these often. You could say the high I got was better than the high you get after downing three tequila shots. I had only ten minutes left as I had to pick up my daughter. Hrishi wanted to click a picture (and I was really glad he was carrying a camera. Some moments are truly worth freezing) and we asked a passer by to click and he obliged. Here is the picture which he sent to me on 9th June (yes this very day) last year with a mail that said “Here’s the photograph as promised. It was fantastic meeting you.” 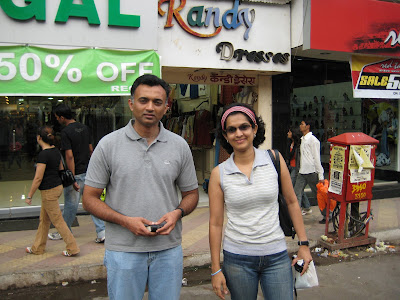 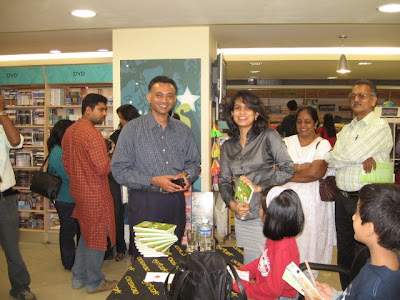 In October that year when I had my book launch at Crossword Bangalore, Hrishi came for it. (see picture on left) He stood silently in the background watching the whole thing, watching me sign books, doing the talk, doing the photo sessions, answering the reporters (click here to see a video of a collection of a photos of it) and he quietly clicked photos. I felt so bad that I could not even talk to him properly. Then when everyone had left, I quickly dialled his mobile—and he was still waiting. We had dinner together and I introduced him to my family and close friends who we were staying with. We went for a drive in his SUV and I felt happy that he got along so well with my husband and with my friends. I secretly felt proud of him too to boast that he was my good friend.

It is truly miraculous how you think some people have vanished forever out of your life and they come right back and you pick up the pieces like you never left off. What makes it even more wonderful is that it renews my faith in the saying “Love and friendship have a power.”