Even if you are not a kitten. 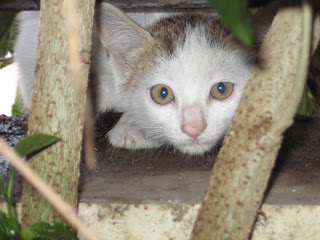 This was not going to be a sad post. I had planned a nice happy thing to write about and had got nice photos too. I usually update my blog in the night, just before going to bed, or early the next day, if I haven’t updated, the previous night. I thought that by the time I write this, I would have cried sufficient tears and passed on my sorrow to sufficient friends, and would feel better-- so that I don’t blog about misery.

Alas, that is not to be.

I watched my kitten getting killed this morning by a stray dog. I rushed to save it, but the dog had already bitten its neck, deep. It was bleeding and writhing in pain. It could barely lift it's head, off the ground. It's body was convulsing. Violently. It was struggling, exactly like a fish struggles, when taken out of water. I couldn’t bear to watch helplessly and I rushed to get my car keys. But it had already died.
Life. So unpredictable. You are there one moment. Could be gone the next. Even if you are not a kitten!(That is one great truth my dad’s death has taught me.You can die suddenly, for absolutely no reason, like he did, even if you are perfectly healthy)

Meanwhile, my friend Tyler, in response to my yesterday’s post had already mailed me a video. It was in my inbox when I logged in. He did not know about the kitten. I told him.
He said "I hate it when I can't fix things"
I said "Me too"

Then I watched the song. It made me cry some more because it was so touching. And about wanting to fix things.
I watched it a couple of more times—mainly to drown out the piteous mewing of the mother cat. She was sitting in my garden and mewing. I really do not know if cats mourn for their babies.
Her mews attracted a male cat, and the last I saw, they were at it again. That made me smile.
Like they say, women need a reason for sex. Men just need a place.