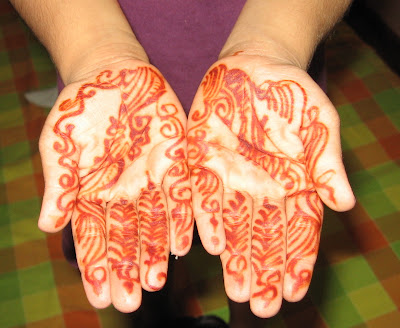 My five and a half year old daughter came home yesterday,(she had gone out to play) with a wide smile of her face, and mehndi on her hands! (see the picture.)
For those of you who do not know what mehndi is, click on
Mehndi

It is an ancient and a beautiful art form. Completely natural and free of any kind of chemicals.After the intricate patterns are made with the ground paste of mehndi leaves, you have to keep it for at least 2 hours, if you want a deep red colour. It lasts for about 2-3 weeks and slowly fades away.

The delighted look on my daughter’s face said it all. She was beaming, her eyes were shining and she was dancing around.
“Look mama—Isn’t it beautiful .I am sooooo happy!! ”

“It is beautiful, darling. Where did you get it?”

“Mama, Renuka put it for me”

Renuka is an eighteen year old who lives in the neighbourhood, loves kids and loves mehndi designs. My daughter was a willing subject, to try her art designs. Renuka is sweet.But Renuka also does not know the school rules. The school rules clearly say that no kind of ‘mehndi’ or temporary tattoo will be allowed.(I never really understood the logic behind that rule. How does it matter as long as the child is learning?)

I hated to remind my daughter about it, but it had to be done.

“Baby, don’t you know that it is not allowed in your school? Won’t your teacher scold you?”

Her answer left me stumped and smiling. She shrugged and said

“But Mama, she can scold me only once. I’ll just say I’m sorry”

I laughed inside and applauded her spirit. The joy that the mehndi gave her, far out weighed any punishment that she would receive.

And like she said, she might be punished only once, but the joy of looking at the mehndi will last for two-three weeks!!
Way to go, my darling—but please don’t tell your teacher that your mama thinks so!!