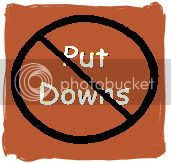 The more I think about it, the more I am convinced that there indeed are some people who derive great happiness or at least satisfaction from putting others down. It makes them feel slightly superior and gives them a strange, sadistic kind of satisfaction, perhaps because they feel inadequate in many ways. It does not make their actions excusable though, nor condonable. I call these people the ‘Prickers’.

Often, what they say is very cleverly disguised and you are left wondering whether they actually meant it as a put down or whether they said it casually. If you bring it up, they would probably brush it aside, saying that you are over-reacting, and of course it was not meant to hurt. But the fact is it leaves you feeling a little unhappy, a little less than what you were. The best way to judge whether or not it is a put down is to pay attention to how it made you feel—never mind what the person who said it intended. If you felt bad, or insulted or a little less than what you were, no matter what others say, it is a put-down.

I have had people telling me all kind of things—Of course, they mean well—or at least that is what they want to believe. One time I was feeling on top of the world, wearing a well fitted jeans and a tee, and thought I was looking great. The pricker said “You know what—you should wear low waist jeans. They hide your paunch better.” I was too stunned to say anything at all. Later that night, I stood for at least seven minutes in front of the mirror, examining myself, trying to find a ‘paunch’. Unless asked for an opinion, I never ever comment on dress sense, style or clothes that others wear—because it is something so personal. The clothes you choose indeed reflect ‘who you choose to be’. If someone is comfortable in jeans, t-shirt and high heels, why not let them be? It does not have to be a party to be able to wear your heels. You feel like wearing them for no reason, it is your choice! (Pssst—a good pair of shoes always makes you feel great.) I have had this pricker question me as to why I wear high heels when I am just going to the local supermarket.


In another context when we were discussing something else, someone remarked to me that supplements of the local editions of Times of India don’t really matter, as they don’t have a great circulation. Of course I felt put down as I write for these very supplements, apart from a few other publications. I have got several letters and phone calls from people saying that something I wrote helped them in some way, or saying that it was well –written. It makes me feel happy—and when the pricker mentioned the not-so-great-circulation, I did feel—well-- pricked.

A friend told me that she felt very hurt, when a friend of hers jokingly remarked that the curtains she bought for her new home looked like saree petticoats because they were not pleated. Of course, it was said as a joke. Another time my friend was really happy that her child had done well in school. This pricker, told her not to feel so happy, as it is easy to do well, when the children are in younger classes—the real test comes when they are older.

The point here is that all these remarks are ‘well meant’. No, thank you—I would rather not have these well meant remarks. I am fine. I mind my own business. And I really wish these prickers would mind theirs. But since they don’t, the trick here is to develop a really thick, anti-deflatable hide.