Who is a GSB Konkani anyway?

January 05, 2008
This is my 200th post and my first for this year.So, I'm writing about something that is close to my heart.

Who is a Konkani anyway?
Years ago, my brother, while at college, had to write a mid term evaluation paper on “People and Cultures of India”. He wrote a paper called ‘Who is a Konkani anyway?’
It explained beautifully who a Konkani Gaud Saraswath Brahmin is, and how these people came to be associated with Kerala, even though they are not Malayalees. (Malayalam is the language in Kerala.)
A question I am often asked is “Where are you from?”
What I like to say is “How does it matter?”( I really do not know why people want to know where I am from. It irks me most of the time.What difference does it make to them where I am from?)
I usually say “I have never lived in one place for more than three years—so it is difficult to answer where I am from.”
Then the asker becomes a little more curious. “So, what is your mother tongue?”
“Konkani”
“Oooh. So are you Catholic?” (At this point I am already bristling, trying my best to hide my irritation)
“No I am a Gaud Saraswath Brahmin and a staunch Hindu.”
Most  are confused at this point. Many people are ignorant about History, Culture and Languages about . (Click on the word 'Konkani' in bold if you wish to know more about Konkani people)

I guess, the confusion about Konkani arises mainly, as it is a language associated with . Originally, my great grandfather lived in Goa.In fact, the family temple is still in . In the 18th Century when the Portuguese invaded India and began converting people forcibly to Christianity, my great grandfather along with many families fled, leaving behind property, ancestral homes, shops---everything they owned. Everything familiar. He carried with him only a small idol of Lord Vishnu. The families who fled settled down along the coast of South of India. That is how you find Konkanis in Karnataka as well as Kerala. (The most conservative fled to the southern parts which were farther away from )
My great grandfather established a temple in a small village in interior Kerala and it still stands.
When I first heard these facts as a child, I was so enraged at the unfairness.
“Why didn’t they fight back?” I remember asking my dad.
“They were helpless. The Portuguese were more powerful.” my dad answered.
“How can they force someone to follow another religion?” I asked. Tolerance is one of the tenets of Hinduism and an act of forcible conversion was truly appalling and beyond my comprehension. I did not understand it as a little girl.(In Hinduism, there is no provision for ‘conversion.’ Hinduism is a way of life.)
I still do not understand it as an adult.
As I grew older, I realized why in the Konkani community, especially among GSB Brahmins, there is such a strict adherence to Tradition and Culture. I understood its richness, its depth, its meaning and the intense need to preserve it. After all, my ancestors were refugees in Kerala, with no belongings, except for an idol and iron hard determination.
Years passed. The next generation was born. And the next. Languages now changed and merged slightly with the local language.(That is the reason why there is a distinct difference in the dialect of Konkani spoken in Karnataka, Kerala and Goa.) 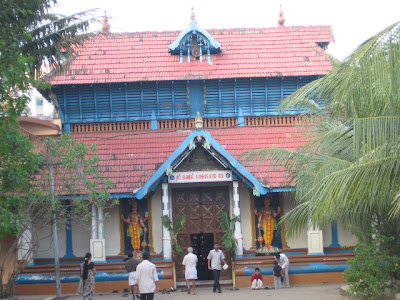 As time went by, people worked hard, progressed, prospered, grew. In 1727 in Ernakulam, a temple was established and it today known as T.D temple, in Ernakulam, Kerala. (The photo above shows the outside gate.When you enter, there is large compound. You cross it and there is the sanctum sanctorum)
The Architecture is am 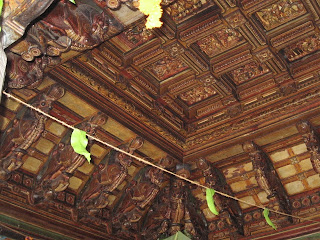 azing.The carvings are so beautiful.(see photo below)
In December 2007, on 23rd to be precise, my Father-in law had organized a grand puja called a ‘Brahmotsav’ in this very temple. The rituals, the grandeur, the splendour, the richness-- all of it was overwhelming. It started at and when it finally finished, it was in the night. Traditional lunch (served on banana leaves with all the Konkani delicacies) was provided for two thousand people.(and they were all served inside the temple) The logistics, the co-ordination and the execution was amazing and left me stumped.

There were many Pujas. (in case you do not know what a puja is, click on the word) 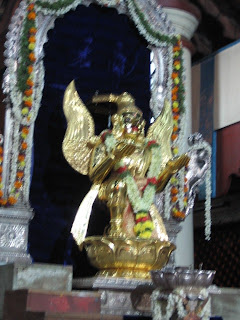 The grandest amongst them was undoubtedly the ‘Bhangara Garuda Puja.’('Bhangara' in konkani means Gold) Garuda is the vehicle of Lord Vishnu and the one at TD temple is taken out on special occasions. It is made of solid gold. Its beauty and richness left me gaping.
Here are more pictures.

I was so glad that my children got to soak it all in.
We returned home that night, tired and exhausted but very contented, quiet and immersed in our thoughts.