You can fool your dad but you can never fool mom!

Mothers are clairvoyant when it comes to you. One look and they can tell what is wrong.(or isn't!) Sometimes they just sense it—they don’t even have to look!

When I was a child, my mom would take one look at me and tell me exactly what might be upsetting me. It was uncanny how she was always right .I used to ask her “But mom, HOW did you know?!!” She used to just smile in reply.

Now that I have kids of my own I know how! For nine months they have been inside you, and it feels almost like they are an extension of a part of your own body. You just sense things and you just know some things. Many a time, I can even tell what they are thinking by just looking at them. If it wasn’t so common and the case universally with all mothers, I would call it eerie.
Poor dads have no such advantage. It is so easy to fool them. (I guess!)

My 6 year old daughter Purvi, and her best friend (who is also her age) spend a lot of time, playing together. They exchange clothes, eat in each other’s homes and are living in each other’s pockets most of the time. Yesterday they both were engrossed in creating a picture. Needless to say, both made the same picture. They left it on the bed and ran out to play. 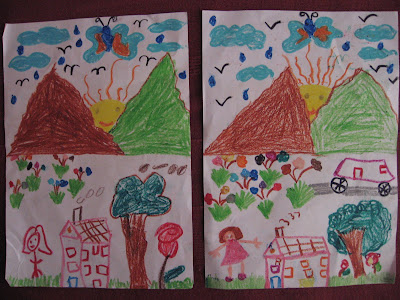 Later, when Satish (my husband) and I found it, I could immediately say that the one on the left was my daughter’s. I could tell by the strokes and the way she had drawn the tree.

Satish: But how do you know—both look the same to me.
Me: I know they seem to be alike, but there are differences.
Satish called out to Purvi ,who confirmed that the one I had identified was indeed hers.