February 14, 2007
VD
Valentines Day or
Veneral Disease (if you are a cynic) or
Very Difficult (if you are single) or
Victoria & David (Beckhams--if you are a football fan,alternately a Posh spice fan)

It all depends on how you look at it. And that changes with age—because as you grow older you become wiser. At least you can pretend to be—and nobody questions as you have been around longer—you know what I mean!

When I was in college, there was this guy called Rueben who was a ‘cool dude’. I was a bit flattered when he gave me a red rose and a valentines card, till I saw the fourteen identical cards in his hand! Exactly like the one he gave me. And he had fourteen red roses too. He said, “Well, I’m being honest. I don’t know which girl will accept my true love.” I laughed and laughed. I don’t think any of the fifteen girls (including me) did. Or maybe the last girl he gave the card to did—because she wouldn’t have seen the other fourteen! Talk about contingency planning! Then life happened, I moved to a new town and I lost touch with Rueben. He did track me down in Mumbai, but I was working then, and we lost touch again.I have no idea where he is now. Rueben was a laugh-a-minute riot. There was never a dull moment with him around. So, Rueben, if you are reading this blog—you know where to reach me!:-)

Last valentines day, I lost a good friend .No, no don’t get me wrong—he did not die. Our friendship did. He sent me a message asking if I would be his valentine. I replied ahem—politely—saying I could not be his valentine, but I could continue to be his friend.(After which I promptly cut off all contact with him—I never thought of him ‘that way’) I was shocked. My husband w

as livid. He said I was gullible. Now, when a guy calls you up long distance from Australia, two or three times a day, what else can it be, he asked. I had, of course, pooh-poohed what he said and defended my friend, till he sent this valentine message. But he was right as usual.It was me who had been naive.

So, this Valentines day I will not check my mail.(You never know what you’ll find in your inbox!) Husband has taken an off from work to spend the day with me (That is really sweet of him) .He is a great guy and I'm still in love with him after 12 years of marriage.(That is a very recent picture of us both)

And Rueben, when you get in touch, whatever you do, please don’t send me a valentines card!The only ones I’m accepting are the ones that my children made for me :-) :-) 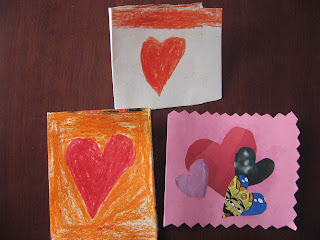