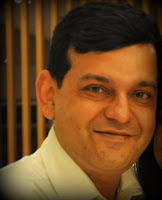 The kids had settled down well in the UK and loved the place. I guess not having to learn Hindi, Sanskrit nor having any homework to do, helped a lot in the process. When we moved back from the UK to India there were a number of groans and moans. We had to throw in a carrot to offset the huge level of pressure that they would go through, settling back in to the Indian educational system.

Preeti always loved animals and my son takes after Preeti in this regard. As a child I too was fond of dogs until my brother was badly bitten by two Pomeranians.  I have been wary of dogs ever since.

However, with an extra-large heart and without realizing what I was getting in to, I bravely volunteered to get a dog for the kids when we got back to India. I think I was partly clouded by what I had seen in the UK. When people take their dogs for walks in the UK, there is no leash. The dog walks calmly next to their owners (even the frisky puppies). There is no running around or pulling. It’s amazing. My theory is that even the dogs are affected by the cold weather there and become docile.

The kids loved the idea and promised to study hard. Preeti was thrilled but asked me a number of times if I was sure. She said it was like having another child and asked if I realised the work involved? With a wave of my hand, I dismissed her concerns and told her I was fine. We should go ahead and get a dog. I went to the extent of telling her that I would even help her by taking the dog out for walks.

Most management schools teach you to be close to the problem as well as the decision making. Guess I was too busy at that time or had slept off when that particular aspect was being taught. I delegated the decision making to Preeti and my son without realizing the consequences. Guess what they chose and got? A Doberman.

The first couple of days were ok. Lostris was a puppy. She remained in a large empty carton (we cut off the top and put in some blankets and she was cozy) we had got for her till we bought her a big crate.  She was tiny and could not come out of the carton. She started to teeth and nipped everything in sight her favourite toy being my formal trousers, our wooden furniture and anything else in attacking distance of her. She then started slowly escaping from the box. At that time, we lived in a duplex  penthouse and we put a grill at the top of the staircase since we did not want her to fall down the stairs. She would remain on top and whenever I came back from office she would run around my legs.

Lostris was always the early bird and would whine top of her voice early in the morning until my sleep was disturbed and I got out of bed and took her to the garden, for her morning job.  She is jet black in colour and one day when someone came home she barked this really scary bark all of a sudden and charged at the person. We caught her just in time and prevented a heart attack. Her bark can chill your blood. Preeti insisted the new baby sleep in our room on the floor. Every time I walked in she would make a beeline for me and nip. If someone rang the bell in the morning and I got out of bed I carefully checked to see if she was asleep before creeping out, or else the task of opening the door went to Preeti.  She could not jump up on the bed so at times I would sneak in to the bedroom and charge and climb on top of the bed. All she could do was come down my side and try and get up. I would gleefully look down and felt I had won the battle. I did win those battles but did not realise I had lost the war.

Preeti bought me the book Marley and me which I read at one shot and found so many common things between Lostris and Marley. It was amazing but a bit late in the day. We already had the Indian version of a bigger Marley with us.  I don’t know how or when but suddenly she became huge. It felt like it happened over night. One jump and she could cross our 6X6 bed, so I was no longer the king of my palace (read bed). She seemed to be exacting her revenge on me for the days when I would gloat at her from on top of the bed.  Every time I went out for even two seconds, she would make a bee line for my side of the bed and start to sleep there (never Preeti’s side of the bed mind you). Every morning she would, at what seemed like midnight to me, create a ruckus till my sleep completely went (Sundays and holidays included). And once she was done with her job she would go and sleep peacefully. I would close my door so that she could not enter. But this is no ordinary dog. It’s a Doberman so what does she do? She stands on her hind legs and with her front legs opens the door. I kid you not. A friend who did not believe this and did not lock the door, nearly croaked it in fright, when Lostris opened the door herself and bounded it in to the room.

Every day when I take Lostris for a walk I meet at least 15 dog owners. Not one of them pulls or barks or acts naughty in any way. Lostris of course ensures I exercise well by developing my muscles especially my arms (I have to hold on to her with all my strength to prevent being yanked off my feet). She tries to eat every old rotten banana on the road and once she has it in her mouth, she gives me this look (what you going to do kind of look). The rotten banana is always tastier than all the fresh nice ones we buy every day (and we buy them since she likes them so much).

And the coup-de grace is of course when I wear my Nike shorts. They are stylishly cut and a little short in length. If ever Lostris sees me standing on the balcony in my shorts then she adopts the Nike line “Just do it”. She comes and puts her nose right up my shorts and that startles the life out of me. And if I am sitting cosily on a beanbag watching a cricket match she has to come and bark at me, plonk herself on top of me on the beanbag or stand in such a way that I miss the match. At times when I twist to see a ball the remote button gets pressed changing the channel. Another favorite pastime of hers is taking my clothes and running around. It’s impossible to catch her since she is so fast. So the best you can do is ignore it and hope and pray that she does not tear them since she has sharp teeth. Of course it makes you even more tidier since you learn to put away things and lock your cupboard.

Lostris has her set of friends. There are the garden lizards, squirrels, frogs and one particular milkman on a Luna. Every time without fail when she is let out in to the garden her first act is to stand on two legs and bark at the lizards and squirrels. At night she has to chase and hassle froggie or else both won’t get a sound night’s sleep. In the morning she will run like someone possessed faster than Malinga’s Yorkers from one gate to the other barking angrily at the milk guy.

Our lives have changed after we got the dog. My son  does not want to leave her and come on a holiday anywhere because of Lostris even if she is put up in good dog boarding place. Every time we go out Preeti keeps looking at the watch since she wants to get back home and be with Lostris. Even my daughter is now very fond of Lostris and keeps petting her and in fact gives her more attention than me. Can you beat that?

All of it sometimes make me wish that I could turn the clock back and be able to take the decision of importing one of those docile dogs from the UK who would lie down near my feet and watch cricket with me or maybe not have a dog at all. But when I see the joy on the children’s and Preeti’s face when Lostris comes in I realise that it is worth it and the sacrifice I am making is quite small.

In fact Lostris is also  very fond of me and though I don’t tell the others I too have grown fond of her. Yes we will have our share of bullying each other but end of the day if you had to live life I guess live it like a King rather than a pauper. Similarly if you had to have a dog (and I would hasten to add think a million times before you jump in to it) then get a Doberman and not any other breed.