I only get jealous because I love you 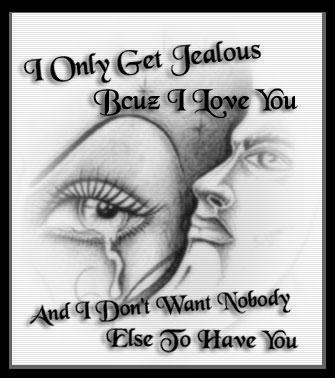 True love is always unconditional. There is no place for jealousy if it's true love. Especially if it is a relationship for life, like a marriage, where you have committed to each other.
A few weeks back I had written a post "Freedom and marriage' which was appreciated by many and the same sentiments were echoed by a majority of people who read it. One of the worst things that one can do to a spouse is restrict them from doing what brings them joy and then impose conditions on them, just because of your insecurities and jealousies. This in the name of 'protecting your marriage/love/relationship.'
One of my friends, a mother of two who has been married for 17 years now, badly wants to go on a trip with her three women friends, without her husband and children. This friend had given up her career after her marriage and is a totally devoted wife and a full time mother.She is aways there for her husband and children and is one of the nicest, warmest individuals I know. But she knows her husband (who has a jealous streak) will never agree and so she 'compromises' and puts away this little dream in her box of unfulfilled wishes and carries on a 'happily married life'.
Another person I know had to give up his hobby of photography as his spouse did not like him getting involved too much with it. Really sad, as he loved it and was such a creative guy. A third I know, a totally gregarious, outgoing warm person who had tonnes of friends of both sexes, had to fight tooth and nail to be 'allowed' to have friends of the opposite sex, after she got married.
The words of  a blogger who goes by the name of Gounder Brownie  (loved her tagline--'reality TV without Shilpa') have to be truly FRAMED and displayed on walls of all people who are married or intending to get married. One of the points she makes is this:
Don't forget that you and your spouse are individuals first. Don't be so self-involved as to believe that you are the whole world for the other person. Nobody is that interesting. Don't get jealous and possessive if s/he wants to spend time by himself/herself or with people other than you.
And another point she makes is:
Marriage is a big event in your life, all right, but it isn't your life. Taking time off from stuff to adjust and adapt and all that is fine. But get back to your life at the end of it. Don't change your priorities overnight and so easily.

She has written a beautiful post after one year of marriage from which the above two points are quoted. To read her whole post click here.
Every couple who has been married at least for two years or more will know how true the above lines are as they truly know what all a marriage involves. Nothing prepares you for it. Things change so much once people start living together and once the children arrive, it is a totally different ball game altogether. Before I had children, I used to look disdainfully at people who brought babies to movie theatres where the baby bawled its head off. I still do not condone it but I am more tolerant now, as I am raising two children who are 13 and 10.
There are going to be times in a marriage where you need people other than your spouse.No two people can be an island unto themsleves.And if you have not invested  that time,  in cultivating relationships, it just might be too late. People might have moved on, without your realising and may not be there for you, simply because you were too busy to make time for them.
So kick out the jealousies and insecurities. Let your spouse do what brings them joy. Do not impose YOUR conditions on them. Let go, if you truly love them. Trust them. They might placate your demands today, but over the years, things you did today indeed have a way of catching up with you.
Which is why the words of Gounder Brownie ring so true, even after 16 years of  a succesful marirage (touchwood).