The Turtle and the Moonfish--the story continues

February 10, 2011
Some time back I had written a poem about the Turtle and the Moonfish. This is Part 2 of what happened since then.Click here to read the first poem.
The Turtle and the moon fish--the story continues 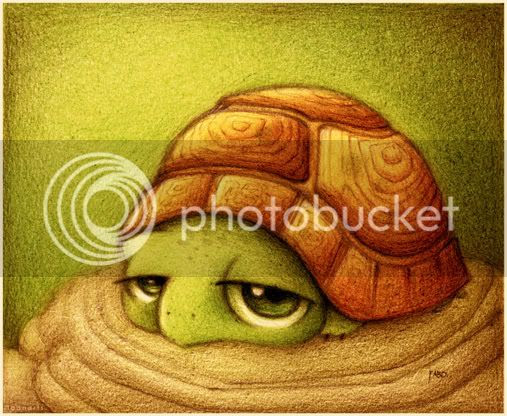 Over the horizon,
Under the sea,
The turtle had got over the moonfish
And had let the past be.
Along came a Starfish,
So friendly and kind.
It was just the antidote,
A bruised turtle hoped to find.
They laughed and they talked,
And spent many happy hours together.
They liked each other (a lot),
And said would be there forever, for each other.
The turtle sang and celebrated,
And  she felt so grateful.
For getting a true friend,
Her heart was overflowing and full.
She thought over it (a lot),
As she had been hurt before.
She wanted to be safe,
Yet, she longed for more.
Finally she decided,
Risk it she must.
She would tell him of her love,
And in  her love she would trust.
She was  certain he loved her too,
So she told him and she waited.
But as each day passed,
Her heart little by little deflated.
She could bear it no longer.
She picked up the phone.
She heard herself begging him (for more),
She could also hear him groan.
She was quiet as she listened,
With a trembling heart.
The words he uttered pierced her,
Deep, like a dart.
He did not say,
Such a whole lot.
Just two simple words
“ I forgot.”
© 2011 Preeti Shenoy

For more poems click here. Some poems have already appeared in print. Kindly do not reproduce without permission.