Do not believe ANYONE who says you can't

All of us have some desires, some dreams. We're only human. And as humans do, we talk about them to our closest friends or our family, the ones with whom we feel most comfortable. A thing that I have noticed is that very often, the first reaction of the person you share your dreams/desires with is that they will point out the reasons why it cannot be done, or why it is a bad idea. They will , in nine cases out of ten, play the devil's advocate. Maybe they think that they are being realistic here by pointing out the pitfalls in your plans (if you have made them) or telling you why it is difficult to realise (if it is a pipe-dream).

They may be trying to protect you, out of their extreme love for you, or they may genuinely believe that it is truly not possible. We, being human, tend to give a lot of weightage to the opinions of those immediately surrounding us. Our deep inherent (and perhaps subconscious)  need for 'approval' and 'love'  makes us tend to agree with the flaws that they point out. After all, they are only giving voice to that niggling doubt you had deep inside,but had ignored or pushed aside, being brave enough to share your dream/pipe-dream.

What then happens is that the pipe-dream remains just that. We do not act on it, as we feel it will be futile. So we push it somewhere to the back of our minds and carry on with daily business of life. We go to work, raise kids, go for movies, read, watch television, cook meals (or order :) ) and before you realise one day of your life had passed. 24 hours have gone--Poof! Vanished forever, never to come back. What we do not realise is that a part of our dream has vanished too, along with it. (or maybe buried deep inside, banished forever, relegated to languish in that box of 'someday maybe')


I can vouch for a fact that if you badly want something and if you act on it, no matter what others say, it is very much possible to achieve it. This is exactly what Rhonda Byrne emphasises in 'The secret'. This is what Esther and Jerry Hicks keep repeating over and over in their numerous books and workshops.

The power of human mind is indeed astonishing. You can read this post of mine which is about the power of believing. It has the very inspiring story of Graham Miles who suffered from a Brain stem stroke and whom the doctors said would never recover. The doctors have no explanation for this, as it was a case of  'locked in syndrome' and most people die within a few months.


One trick that I have learnt to make your dreams come true, is never to share it with anyone who is likely to express even the slightest amount of negativity. You want to lose 10 kilos? You can! You want to train to run for a marathon? You really can! Don't let anyone tell you otherwise.Hug your dreams to yourself but pursue them quietly.

It does require consistent hard work, discipline, dedication. It may be difficult, but certainly it is not impossible. Do not believe anyone who says that you cannot. Stay away from well meaning people who say "You are being too ambitious." What they are capable of, and what you are capable of is very different. To them, it may seem so. They are judging you by their yardsticks which may not be applicable to you at all, even if they happen to be people who know you well.

In Feb 2007, it was  a pipe dream for me, just to see my name in print.(let alone be a published author which seemed so far fetched!)  I remember how delighted and over-joyed I was, when I first saw my name in print on an article I wrote for a local newspaper. I went on to write for Times of India and Readers Digest.I had no idea at that time, that I would really become a published author and that too of a National best-seller (which sold more than 24000 copies and still counting! ). Also, it had been a pipe-dream for me, for many years, to be able to create realistic portraits. I never knew that would come true as well and I never knew people would consider me good enough to commission me. Yes, I did work hard.

But more than that I knew better than to listen to the nay-sayers. I had my fair share of them and I still come across them. But now I have made myself immune to what the discourager says. When someone tells me that I am being too ambitious or someone tells me "Oh--but  that is impossible', it only makes me more determined to chase it harder.

Because I know something that they don't-- Nelson Mandela's words.

PS: My second book 'Life is what you make it' which will be out in stores by 25th Feb, can now be pre-ordered with a cash on delivery option! 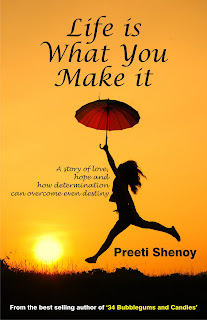 You can also read the synopsis and join discussions on the Facebook page.