Humour is the best way to deal with stress, sorrow, depression and difficult times like these. There are many scientific studies which have proven a co-relation between good health and a sense of humour. Humour is a quality that enables us to find joy even in the most adverse of situations. Roberto Benigni’s movie ‘Life is beautiful’ potrays it so well, where it depicts the life of a Jewish man and his young son in a Nazi Death camp. (If you haven’t watched it yet, you are really missing something in life—stop reading and go watch! Click on title to know more)

How do you find humour? Some people are born with it. Some cultivate it till it becomes a habit and some cannot laugh no matter how much they try. (I do know individuals like that. I usually avoid them)

If you aren’t a great TV Buff and find shows like ‘Great Indian laughter challenge’ (I hate it!) particularly unamusing—what do you do?

You seek out people who are radiators—That’s what you do. [If you have read my book, then you know what I am talking about, if not I recommend that you go to the nearest book store :-)] . This post is a tribute to one such radiator, a person with a terrific sense of humour—Nikhil.

Six months back I did not even know he existed. Neither did he.[That I existed I mean ;-)] Now I fin 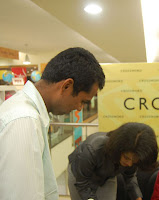 d myself calling him up whenever I feel I need my humour dose. We met through my blog (where else!?) and soon we were chatting on g-talk. The first time I spoke to him I could almost feel him bouncing right out of the computer screen—there was so much energy, so much restlessness—so much of a go-getting attitude—he was so High Octane. I was kind of surprised and then I asked him directly if he was indeed like that. He admitted he was. I met him at my book launch (yes, that is me and him in the pic--I'm signing his book) and I half expected to see a guy bouncing up and down, jumping around like he had flubber boots in a basket ball match. I was a little surprised to see a calm (well—kind of!) guy with a pleasant smile and a sunny disposition. Fortunately for me I did not see him in the audience while I was giving my talk, else I am certain I would have been distracted.

What I really like about him is that I can be brutally honest with him, and he really does not hold it against me. He had left a comment on my blog (with his typical sense of humour and at that time I did not know him well) and I deleted it—then I pinged him, mailed him and explained why and I demanded that he should leave a comment that I like! (Yeah—I can be obnoxious, I know) He smiled and obliged. I decided right then that I like the guy.

He teases me mercilessly and I tease him right back. (Not that kind of teasing, silly—just verbal repartees) Yesterday I spoke to him on the phone and he asked me what else I was working on apart from my second book. So I told him that I had just submitted an article on Sports accessories for Times of India.

“Wow.” he says and just as I am beginning to feel very great and important he adds

“Do you know anything at all about sports accessories or are you just writing? Is it even your area of interest?”

“Have you forgotten?” I ask him “I used to play basketball at national level.” (Yes—I used to in college and at school)

“Ende amme” he says “Don’t start off. Yes I remember.” (If you understand Mallu, then you know why it’s funny—somehow ‘ende amme’ does not have an equivalent English translation.)

Then he talks about TV and gives me gyaan about TV personalities. I don’t watch Television. The only two channels I watch are music channels—VH1 and 9XM—and Nikhil has not heard of 9XM—but he gives me a long winded explanation of why the channel is called 9X. (yeah—he is like that.The guy knows a lot)

Then he asks me if I have seen NDTV’s Srinivasan Jain (I hadn’t). Nikhil could not believe it.

He says “Which Era are you from? Did TV exist when you were born? Oh—Are you that old?” Then he tries to convince me about how great Srinivasan Jain is and he says I’ll find him charming and a day will come when I will definitely fall for him.

“No way” I retort “ While your Srinivasan may speak well I fall only for men with well toned bodies. Apart from George Clooney who is an exception, I like Saif, Sallu, Shiny Ahuja and relatively unknown Punju guy who I am sure you have not even heard of.”

We mostly talk non-sense like this. Usually after a talk with him, I’m in a great mood.

Sometime back he did something for me which really floored me. If you want to know what go here.(I am thrilled with it of course and that's putting it mildly)

He is such an unassuming and down to earth guy with no airs or attitude and he hides his achievements so well with his sense of comic timing. Look at this post he wrote. (It's one of my favourites)
He has also won so many prestigious National level quizzes and he knows such a lot.

I should have known.

I always had a thing for quizzers.