Marriage and its other implications

A friend of mine, a smart brave young lady, who has a great career going for her, has just called off her wedding, after being engaged for 5 months, as she realised that the guy was not right for her. I totally applauded her courage and her decision. Her folks and she suffered a huge loss monetarily as all the wedding arrangements had been made, venue had been booked and even wedding  rings had been bought. Can you imagine the amount of courage this would have taken, especially in an Indian scenario? Her parents support her completely and I was happy that she had the courage to call off her wedding rather than suffer with the wrong person for the wrong reasons of placating society. Not everyone can be as brave and as certain as her.

I have been doing some serious thinking about marriage. I know some bright young women in their late twenties or early thirties, who are single and financially independent and leading their own lives. Yet 'well meaning relatives' and parents push them like crazy to get married. Nothing you do as a woman counts, unless you have got married and produced a child or two! Somehow, in the Indian society, everybody is content only if you are 'settled' (meaning married and produced a kid within 2 years of marriage) once you cross the age of 25/26, whether you are a guy or a girl. I also know some really smart young men who are being pressured the same way.

With young men (and also young women) what happens mostly after they get a job and start earning well is that many of their friends get married (perhaps succumbing to pressure from family). They post 'happy couple pictures' on social networking sites (I find it amusing when someone puts up a couple picture or a picture of their child as their display pic on Facebook!). They find their own homes and move out of their bachelor(ette) pads. At the end of the day, they have 'someone to go home to'. All this sounds fantastically exciting when you're single and longing to 'have a family of your own.' Which is not really a bad thing.


But what most people do when they are looking for a person to marry, is that they compromise, simply because time is running out, and 'everybody is getting married' and because parents and well meaning relatives will stop nagging. If the prospective match  meets about 60% of what you have in mind (after meeting several people who matched only 35-40%, then one gets fed up of searching for the perfect one too), they say yes.(and everyone is ecstatically happy for a few days and congratulations start pouring in).

Trouble usually starts after 5-6 months of knowing each other really well and when the initial excitement of a new person in your life wanes a bit. If you're married by then, its too late :-) Then it is a lifetime of 'adjustments and compromises'. I had elaborated on this in my article 'Marriage and Freedom'.


But if you're not married, then some, like my friend, do the smart thing and call it off. (A similar scenario happens in Zindagi Na mile Dobara--I loved the movie! It is a MUST watch)


Yesterday, I posted a part of Steve Pavlina's article on my tumblr (where I post stuff I find on the Internet that interests me) with a link to read his whole post. Here is a screen shot of it. 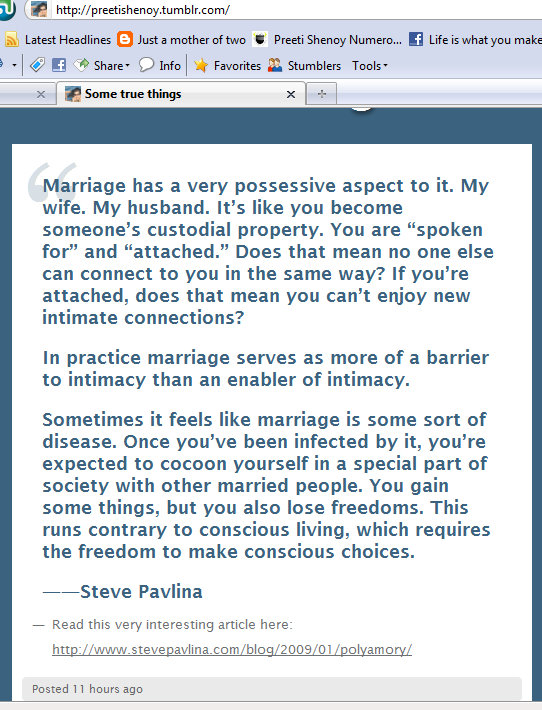 Steve Pavlina has indeed written an incisive article and he addresses many issues and  myths like physical intimacy, sexuality and selfishness. It takes a LOT of courage to go the path that Steve has chosen. It takes  depth of character to even understand what he is saying, especially with regard to sex. If you have been conditioned by society, by peers, by parents to believe in the following concepts
"Marriage means compromises"
"Everybody has to adjust in a marriage,"
"I will not do anything that my spouse does not like even if it matters a hell of a lot to me, because it makes my spouse feel insecure/unhappy. After all I love my spouse and I have to make this marriage work"

then you will definitely find Steve's frank views shocking and pure blasphemy. (I can already picture the reactions of a few of my good friends if they read Steve's article) :-)


But then I also know of many married people who will nod in agreement to everything that Steve has to say ;-)

Personally I do believe that a partner should never restrict you  from doing things  YOU want to, because of their jealousies, their insecurities, their needs. I know many who badly want to do many things, but they do not do it, because their partner does not like it or partner does not share the same interests. They live their lives exactly like how their spouse wants them to, giving up things (and even people) that mean a lot to them, thinking that if they do that, then the marriage will be a happy one. Over a period of few years they are a mere shadow of what they used to be and they are not even sure of their needs anymore. They define themselves as somebody's  mother, somebody's wife, somebody's father, which are all roles which are important, no doubt. But beneath that is the interesting person who used to be so much fun,who used to be so interesting and full of life, who has faded away now. They exist in their weary marriages, adjusting, compromising, placating parents, society and everyone but themselves, too afraid to make a change.

One can grow in a relationship only if it is free of restrictions, jealousies and mistrust.
To this end, Steve Pavlina's views are something which I completely and wholeheartedly endorse.


If you're single and you have not yet found the right one, fret not! Enjoy your freedom!!  Marriage is really not as big a deal as its being made out to be, trust  me!  (I have been married 16 years) It is a  LOT of work and a LOT of giving up, even when your spouse is the most understanding of people.

I never expected this post to generate this much interest!! I have been flooded with an enormous number of mails, from  so many people who feel stuck in their current life situations. All of them bless me for writing the post and send me so much love. Thanks so much for that! Many  of them ask if I will be their mentor and guide. While I am honoured that you choose me to be your mentor, I am really sorry, I will not be able to oblige. Everyone knows that I put more than a 100% into every single thing I undertake. Currently I have a lot of things to keep me occupied (the top priority being completing my 3rd book) and hence I will not be able to take any mentoring requests or requests for guidance which will involve a LOT of commitment from me.

Also many people are leaving comments on this post which is not at all in line with what is written in the post. Many are making personal comments about other people who have commented on the post! Also, Please understand that I am not interested in getting into a debate with anyone who has already subscribed to the idea that "marriage means compromises."

Hence I am screening the comments for this post and  will be deleting only those which are not  directly relevant to what is being discussed.

Thanks a lot folks! Next post onwards comments will not be screened  :)