January 28, 2011
Some people look much younger than their actual age  and some people look so much older. With a 'youth obsessed society' the former might seem an enviable option, what with scientists conducting successful experiments in mice to reverse ageing  (I don't think it made an iota of difference to the mice though :-)), but it does come with its own set of problems, which might seem comical to the ones who do not go through it. 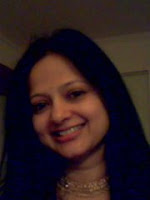 One of my favourite cousins, a single working mum, who lives in the U.S,  looks a lot younger than she actually is. She is 43 now (and yes that is her very recent picture on the left! Isn't she gorgeous? :-)) and she really looks like her daughter's older sister.When she was about 36, she had taken her daughter to Disneyland (USA) and they were giving balloons to the children who were visiting--and yeah--you guessed it--they gave her a balloon as they presumed she was a teen! I laughed my head off, when I heard of the incident  :-)

When I was in the UK (a couple of months back) , an animal rights activist  rang my doorbell. After explaining his cause very enthusiastically, he then gave me a form and a brochure, and enquired politely if there was anyone who could sign for it. The penny did not immediately drop and I said I would sign, whereupon he cleared his throat a bit embarrassed and said someone older than 25 had to sign.

When I had tried to buy liquor in the UK, they asked me for proof of age. (They are very strict there now about not selling alcohol to those under 25 unless ID proof which shows age is produced)

To me, it is mildly flattering and  hugely amusing. I have now learnt to deal with it, but it still does amuse me (no end) each time it happens, as I  have been told so many times now, mostly in puzzled bewilderment and sometimes in  undisguised disbelief, that I look much younger than I actually am and how is it possible and what do I do.(and I am quite proud to say I  am 39 and I have no qualms about admitting my age.  Heck, I have lived each day  and have  earned my wisdom :-D) People do not believe that I indeed have a 13 year old son and a nine year old daughter.

Looking younger than one's years--I think it is partly genetic.  Partly it is also how one feels, how active one is and how fit one keeps one self.

I know several women who look so much younger than their ages.Several of my friends, who are much older than me and who have adult children, look just half their age. When I sat and thought about why it could be so and were there any common factors in all these women, the following was what I observed.

1.They all have had their children before hitting 27 and they have all breast-fed their children for over an year.
2.They all are very particular about their fitness. They either walk or do yoga or play a sport.
3.They all have a fabulous dress sense and wear lovely, flattering, well fitted clothes.
4.They are all such fun loving individuals. I always have a whale of a time with them.
5.They are very confident,sassy and bold and are very sure of themselves and what they want out of life and what they want in a man. (Maybe it comes with age!) Some of them are big flirts too! :-)
6.None of them want to be any younger and all of them without an exception are happy to be at the age that they are and even more happy that their twenties and thirties are over! They are truly happy to be in their forties and fifties. (makes me want to get there!)
7.They all inevitably have a fabulous equation with the younger folks in their twenties. Their children's friends are sometimes their friends and all of them are very popular among the younger crowd. (may be the younger crowd considers them role models?)


8.None of them use make-up on a regular basis.
9.They all have such enthusiasm for life.They are willing to learn new things.
10.They have multiple interests and they all DEFINITELY have a life other than their husbands and children.They may not necessarily be having careers but they all do something or the other on their own.
11.They have their own  friends who are only their friends and not common friends with their spouse.
12.They all smile a lot!


I have no idea how these women manage to do it. All I know is  these women inspire me. I admire all of them, not just for their looks, but for their attitude to life. I sure want to be like them when I get there.

Who knows maybe they have all cracked the secret to some magic formula which made Bryam Adams croon "18 till i die" :-)  Whatever be their secret, their attitude sure is infectious!