January 08, 2011
Small little colourful tops, rattles that are made so precisely and scientifically that they produce a pleasing sound on rotating (not shaking) as the flawlessly carved little grooves turn with a clackety clack much like the prayer wheels found in Buddhist monasteries, perfectly carved little Russian nesting dolls, vibrant stacking counters, all of them made of  wood, eco-friendly, non-toxic, lacquered with brilliant colours and oh-so-hard- to-resist! This was the site that greeted me on the mat of a toy-seller, who had spread out his wares on the side of the  pavement, on the road leading to Infant Jesus Shrine, in Viveknagar, Bangalore, as I walked to the Church , last Thursday. 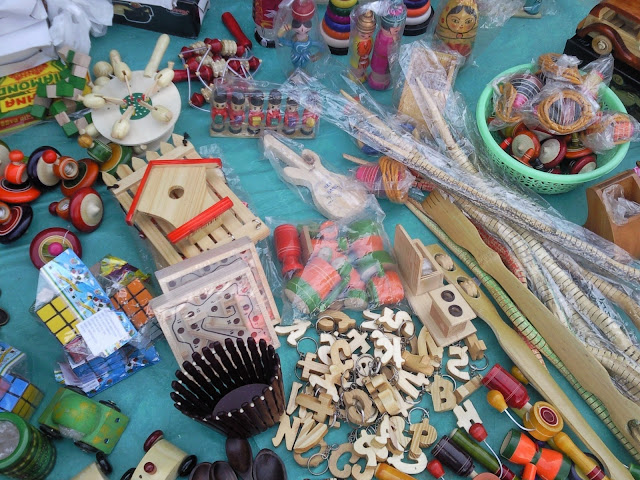 Years ago, when my son was an infant, I had visited Channapatna, the 'toy town' which is located 60 kms from Bangalore. I was fascinated and mesmerised. These toys I was now looking at, distinctly had the Channapatna stamp on them. I used to love these toys and seeing them suddenly took me down the memory lane. I stopped and picked up a wooden top and ran my hands around it. Definitely, I was buying it. My inherent curiosity  made me strike up a conversation with the toy-seller. I mentioned to him that they looked like 'channapatna toys' and he answered that they indeed were and that he was an artisan and he carved all of them himself! Then he proudly took out his ID card, issued by the Channapatna Artisans society and showed it to me. I learnt that his name was Syed Imtiaz Ahmed. I started talking to him and discovered that he travels 60 kilometres by bus, twice a week from Channapatna to Bangalore, with the toys that he makes. He sells them on the pavement, and returns back home at the end of the day. I mentioned to him that I am a writer and asked if he would mind if I wrote about him and clicked a picture to go with my piece. He did not mind at all and was very happy to pose. He wanted to know which newspaper I write for. I mentioned that I used to write for Times of India, but I now write books and this story about him, I would be writing on the Internet (somehow I don't think he would have understood what a blog is).

I bought some lovely stuff from him (mainly wooden tops and also a very realistic looking wooden snake)  and my children were delighted with their gifts. I was happy that I was helping to support an ancient tradition of toy-making,which had its origins during the rule of Emperor Tipu Sultan, who had invited artisans from Persia, to train the local artisans to make these toys.This tradition does need our patronage and support, especially if they have to compete with the modern toy industry with its smart advertising and movie affiliations
(Remember Toy-story toys?) which is a multi-million dollar industry. 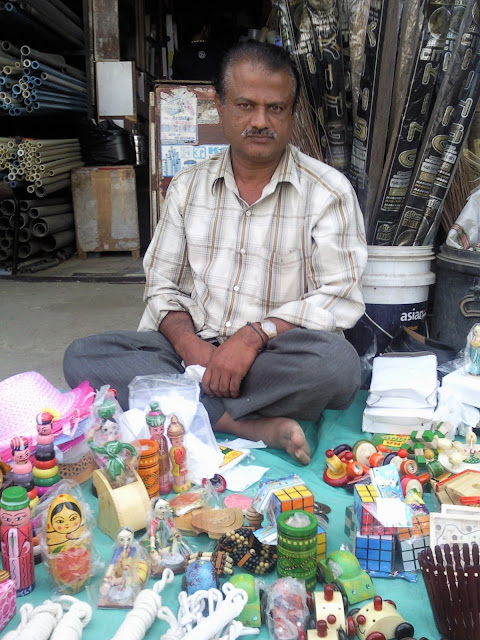 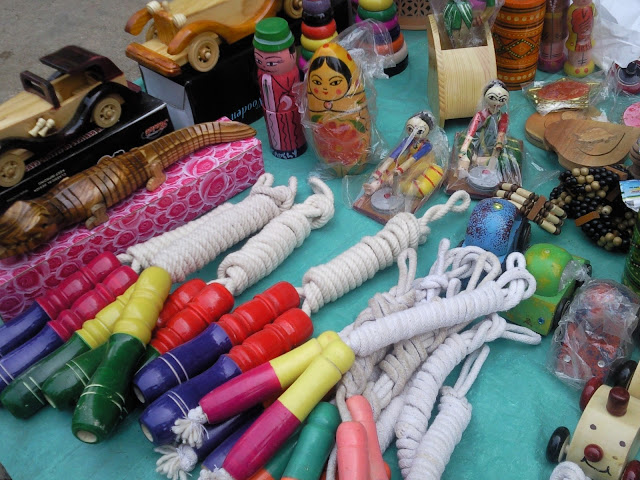 By buying such hand-crafted toys, we can do our bit to preserve tradition and a slice of history and also encourage the artisan who spends more than two hours hand-crafting one single piece.

And so what if you don't have kids? You can always gift it to the children in the neighbourhood or the children of your domestic help or any child for that matter. It is a sure shot way  to spread smiles and boost your own happiness. :-)