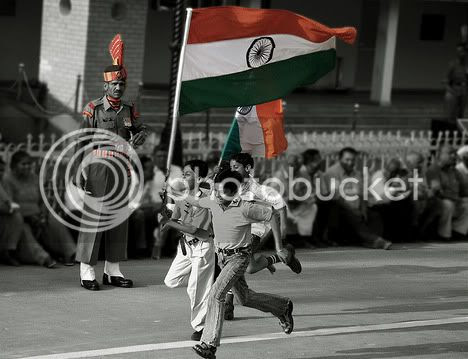 This morning I attended a flag hoisting event and proudly sang the National anthem, as the tricolour fluttered in the breeze. The stir of patriotism in me was a wave, a deluge.I texted  about twelve of my good friends  conveying the same, wishing them a Happy Republic day. Eight of them cared enough to text back and the pride in being Indian was obvious in their replies too.
Somehow, jokes about Republic day which are doing the rounds (stuff like 'conserve the patriotism') and jokes which do the rounds ridiculing India, do not go down well with me. I don't see anything frivolous about Republic day or Independence celebrations. We  as a nation, have indeed progressed a lot, even if we still have a far way to go. Yes, there might be a million things which are wrong, but surely there are many positives as well--it isn't all doom and gloom, as the pessimists might like to point out.
Many people do not even care about the freedom that we now have.It is taken for granted. Even as not so long back as 1932, there will still signboards in India, outside the European Clubs, which said "Indians and Dogs not allowed." My blood boils in outrage even as I type it. How can such a thing be a laughing matter? Hundreds of people like Pritilata Waddekar  laid down their lives. They believed in a cause. They cared.
It is the duty of every Indian citizen to at least respect the tricolour, attend a flag hoisting and be aware of our past. If they have children, it is indeed their responsibility to tell their children about people like Chandrashekar Azad, Bhagat Singh, Bhaga Jatin, Rani Laksmibai (Bundelo har bolo ke muh hame suni kahani thi, Khoob ladi mardani woh tho jhansi wali rani thi)  and many many more .(They are too many to name in one single blog post).
Only in view of the Freedom movement and only against the backdrop of what it used to be like, can one fully understand the significance and importance of Independence Day as well as Republic day.(Many are not aware that we became a Republic only in 1950).
As India celebrates its 62nd Republic day, as the Military might and Indian culture unfolds at the Parade at Rajpath, as I delightfully watch the floats I truly and whole heartedly take immaculate pride in my country and I nod in agreement as strains of 'Saare jahan se achcha ' fill the air.
It is definitely not uncool to be patriotic.
Jai Hind!