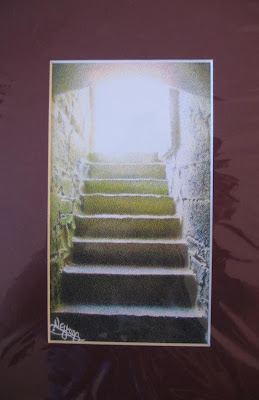 It was on 14 of November 2006 that I met someone called Niall Young. It was a virtual meeting. I was new to blogging and had been browsing the Internet by clicking ‘next blog’ and suddenly a poetry blog caught my eye. The writing was heart-warming, different and unique. The blog belonged to someone called Tim Young. I found the writing beautiful and so I left a comment.

And the next thing I know, I get a comment from Tim’s brother, Niall. Those days hardly anyone read my blog. I was delighted when Niall left a comment on this post of mine saying “I discovered your Blog after reading your comments on my Brother's site (Forever England).You have such a deep an special heart. You have obviously known pain, and because of that, you feel that of others too. Love yourself, care for yourself and lift your hands to the sky in the mornings rising sun. You are here for a purpose! Keep writing”

Then a few more posts and a few more comments later, we exchanged email ids. We started writing to each other and became great friends.

I am a big fan of Niall’s work and I couldn’t believe the photograph like pictures he churns out. It is hard to believe that some of his pictures are not photos—they are so brilliant. I have written about it in a post called ‘Each dot matters’ (click on it to read it –its worth your time)

Once Niall did not update his blog for four days. There was no mail from him too. I was worried and I called him up.(By now we had exchanged phone numbers too) That was the first time we were speaking on the phone to each other and he sounded ‘oh-so-charming’ with a wonderful deep voice and an English accent to match. He was happy that I had called.

After that we spoke on and off and we continued writing regularly. 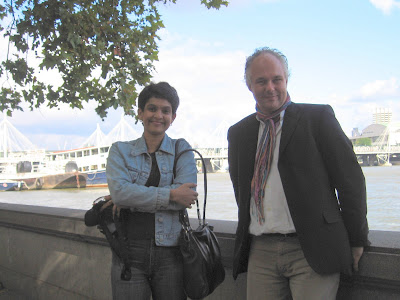 Then when I traveled to we met in . It was really memorable for me as well as him. (yes—that’s him and me in the picture you see. I had cut my hair really short in October 2007) I have blogged about the meeting HERE and so has he, HERE.

Niall gifted me an original painting of his —something that very few people have had the privilege of! I really treasure his pictures and count them among the few valuable things I have. He gave me many prints too. I was overwhelmed. The picture you see at the start of this post is one of the pictures which he gifted me, which I really liked.

So why am I telling you all this today, again?

I am very glad that a random click on the Internet led to an enriching friendship.

I am happy that blogging has widened my world.

I am delighted that I got a chance to meet him and Jan his wife and his daughter Annie.

I am happy that my kids got on so well with Annie.

But most of all I am so glad that I have a truly dependable friend for life.

Happy birthday Niall— May your amazing talent for churning out pictures that are so alive continue to delight thousands more!