July 08, 2013
Most of you must now be aware that Amazon has started in India. I don't remember if I mentioned that on the day that it opened in India, my book (Life is what you make it) was on Number one spot. 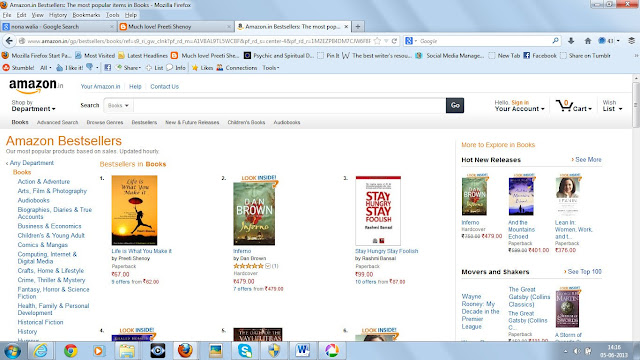 Today I checked the Amazon Indian writing best seller list. The best-seller lists are updated every hour on Amazon, based on actual purchases and it is an automated list.Out of the thousands of books published, it lists the top 100 best-selling books in the country.

Guess what i discovered?

ALL the books I have written so far, are in this list of top 100!

Boy, was I overjoyed!

Here is the order of appearance:

Life is what you make it (Number 4 on the list)


I also got two totally contrasting perspectives today. One reader wrote to tell me that she hated 'life is what you make it'. It left her depressed and she was unable to complete the book. Another wrote to me telling me that he was on the verge of suicide and the book saved his life because it gave him hope.

Yet another reader (someone who has done her Ph.d) had this to say about 'The secret wish list'

"I must congratulate you once again, for your work portrays positive images of women despite the hardships, conflicts that they go through. Your portrayal of adolescence and young adulthood as a life stage is admirable. How a simple folly committed in youth changes the person's life entirely is something you have dealt in depth. You have somehow also sent a message to parents discreetly about the repercussions of their actions which can have a deep impact on the individual's psyche. Sorry, I can go on and on about your book, but you must be hard pressed for time."


For me, what really counts is whether my writings manage to make an emotional connect with the reader. If the reader could feel everything that the protagonist underwent, I would consider it a great compliment. It is an honour to get your mails and even though I get hundreds, the joy is still the same.

I take a while to reply (about 20-30 days on an average) as I have a huge back-log of mails. As much as I would like to reply promptly, it just cannot be done, as then I would have to make an alternate career as a e-mail writer , instead of writing books.

If you want to interact with me, and are in a hurry to get my response, the fastest way would be twitter (@preetishenoy is my twitter handle). The next best way to get a quick reply is Facebook wall of my author page.
The third best way would be an e-mail. (Mail me on ps(at)preetishenoy(dot)com. The worst way  to try and reach me is by phone! I never pick up unknown numbers and I also talk on the phone only to my mom :)  (Because I need huge chunks of time to write undisturbed, and I find telephones a huge intrusion when I am writing)

I got a threat also today. Someone tweeted to me saying I do not reply to his tweets at all, and unless I replied immediately he would 'black-list' me and I would lose a fan :)

Can you guess whether I replied or not? :)

Leave me your guess in the comment box, and I shall update this post tomorrow with my answer.

To  Buy my books in India, click here. (You can pay cash on delivery. You don't need a credit card)
To buy my books on Amazon, outside India click here