March 17, 2013
Most couples celebrate their wedding anniversaries. We don't.

Instead we celebrate the day that we first met. And today completes 18 years. Our relationship is finally an adult :)

A friend of mine used to tell me that marriages should be renewable contracts. They should last for seven years and at the end of it, one should have an option whether to renew it or not. Then people would work that much harder at their marriages. If marriages came with that option I am certain Satish might have terminated the contract long back :) If he didn't I would have, for sure. :)

We are so darn different, he and I. We are complete opposites in many ways.  He loves the old Hindi songs and Old English songs and my tastes in music are eclectic. When it comes to fitness, I am a dedicated fitness enthusiast and a yoga buff. He couldn't care less about exercise or fitness! He loves food. While I do cook tasty stuff for him and the kids, but  if someone would invent a pill that will take care of all the nutritional needs by popping it, instead of eating, I would opt for that any day! I am indifferent towards food. It doesn't excite me the way it excites most people I know. He loves ice-creams, desserts and sweets. I hate them!
His attitude to parenting  too, is so different from mine. I tend to be liberal, loving but firm and I aim to make the children self-sufficient and highly independent (as that is how I was raised). I never run around in the morning, trying to help them to find their socks and belt and other stuff. (My take on this is that they have to learn to do it themselves--heck they are 15 and 11. Old enough!) But he, being the devoted father will find their stuff for them, fill their water-bottles for them and will even run around finding pens, pencil boxes and what not.

When it comes to personalities too, we are as different as chalk and cheese. He is calm and composed almost all the time, Nothing rattles him. I am animated, excited, enthusiastic. I  am highly sensitive and I feel deeply for even the smallest things. I cried for hours when I heard of the beagles in Bangalore on whom horrendous tests were performed by the pharmaceutical companies for drug testing. He felt bad that I was crying but things like these do not affect him as much as they affect me.
I looooooooooooove dogs. So do the kids. He got a dog just for my sake (even though I never asked for it). He detests them!(but yet he will take her for a walk everyday!)

He jokes with me saying that he deserves a Padmashri award for putting up with me for so many years. I retort back saying, if he gets a Padmashree, i deserve  Bharat ratna for sure! :)

We have had our share of the nastiest fights. I remember once after a particularly nasty fight, I stomped out with the car keys, banging the door shut, in the middle of the night, with just my mobile phone. Once I was inside the car, I kept hoping he would call me, as I did not want to drive around in my night clothes. So I sat inside the car waiting. He did not call. After two hours of waiting (yeah I sat that long in the car!) I quietly swallowed my pride and ego and I crept back home  and found him waiting for me on the sofa.
'Why didn't you call? What if I was in some accident?' I asked him angrily.
'Because I peeped out of the kitchen window and saw you sitting in the car and I kept watching you. And I knew you hadn't driven off, as I kept listening for the sound of the ignition, ' he said.
Then we both burst out into laughter.

I guess what we share in common is a terrific sense of humour.(apart from the love of books. He too, like me, reads a LOT) Oh, how we laugh! More than anything being together is so much fun. He makes me laugh and I make him laugh. (and sometimes we make each other cry and pull out our hair in frustration too! :P )

Eighteen years is a long time.
And if you ask me today if I want to renew the contract, I would say yes. For a lifetime.

I love you Satish Shenoy.
For standing by me through the worst of times and being prouder than me of all that I have achieved.
For being the wind beneath my wings and the anchor when the seas were rough.
For being the rock, the safety net and the support system, all rolled into one.
For being a wonderful balance to my rather volatile, unpredictable and impulsive nature.
For making me laugh and putting up with some of  the silliest of demands.

But most importantly for never letting go :)
We have had some bad times, but I think the great times we have had, far outweigh, outshine and 'out-dazzle' the bad ones.
Yes, we have both grown up and we have come a long way.
It hasn't been easy but oh--it has been totally worth it :) 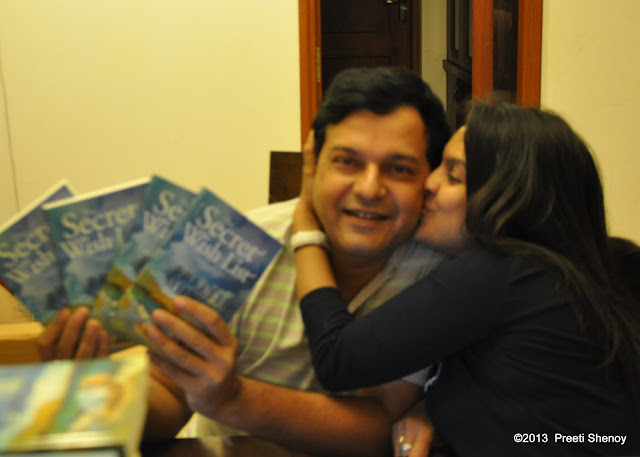 
Check out my latest book here where it has been getting some fabulous reviews. You don't need a credit card. You can even pay cash on delivery.