February 07, 2013
How do you even begin to describe an experience that still lingers in the mind, it's after-effects enveloping you like a warm hug from an old friend, the larger than life feeling of awe that it stirred in you and most of all how humbled you felt to be a part of it all?

I attended the Taj Lit fest from 1st February to 3rd February at Agra. For me it was an amalgamation of so many things really--a chance to meet  the authors I have always admired, a chance to interact with my readers, but above all to be in the midst of so many brilliant minds.

The setting itself was fantastic and very nicely done. The organisers had taken care of even the smallest details and everything went like clock-work. They handled the glitches well, even though it was the first time they were organizing such a fest. The  people at Goodword Media were so sweet, cheerful and smilingly complied to almost all requests. 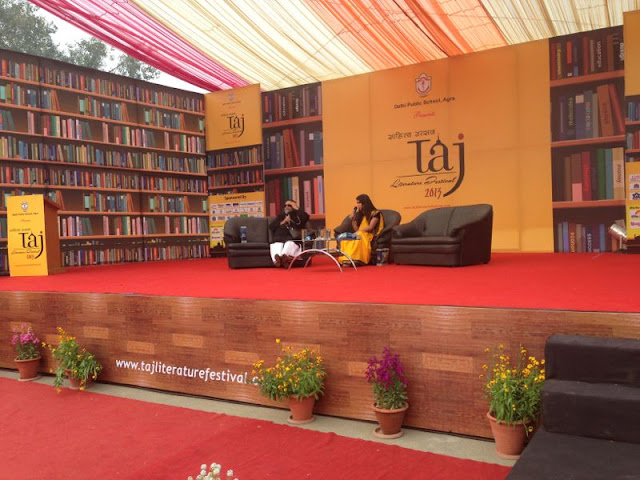 My session was with the very renowned Prahalad Kakkar.  Earlier in the day, he had a session with Shobha De.

The high point (I am so elated even now) came when Prahalad told me that he loved my book, 'The secret wish list' ! He said he just started reading and before he realised he was half way through it. He loved the ease with which it was written, he loved the narrative and the simplicity. He said all this on stage and honestly I felt like getting up, jumping and doing a woohoo and a fist pump. 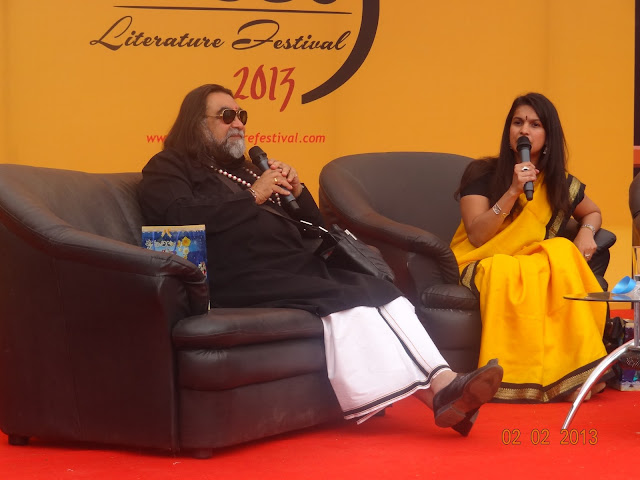 I was completely bowled over by the phenomenon that is Prahald Kakkar.  He is extremely articulate, intelligent, well-read and sharp. But he is also so down-to-earth.  I couldnt help noticing that  at the Lit-fest, he was like a King  holding a durbaar, as the media kept hovering around him. 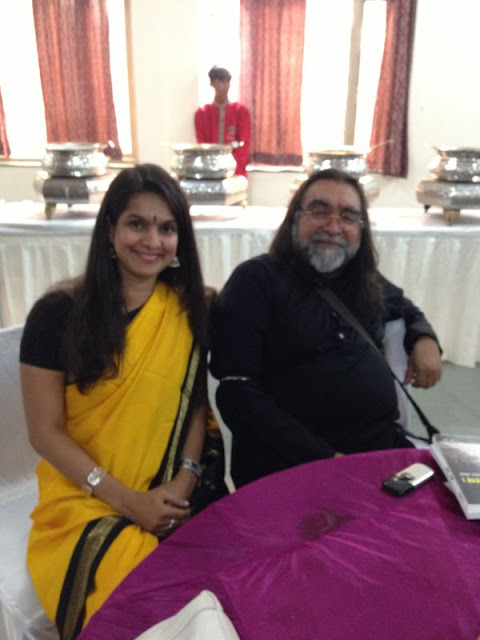 He invited me to join him for lunch and I did enjoy conversing with him, even though he tried to tease me by asking some outrageous question which made me burst out into laughter. Had I been younger I would have probably been embarrassed and nervous and I was glad I wasn't.


I also really liked Anna Vetticad's session. When a very elderly gentleman from the audience stood up and ticked her off for speaking in English and  said that her session has to be in the National language Hindi, Anna answered him brilliantly. She told him in perfect Hindi that she is from kerala and  has been brought up in Delhi and hence she can speak Hindi. But the fact is today English is as much an Indian language as Hindi or any other language is. She said truly does not subscribe to the fact that any one languge  is superior to the other. Then she broke out into perfect Malayalam and said that if she wants she can conduct the entire session in her language, malayalam but not a single soul would have undertsood.  I stood up and applauded. (I speak 6 Indian languages including Malayalam). Kudos to you, Anna Vetticad! Well said! 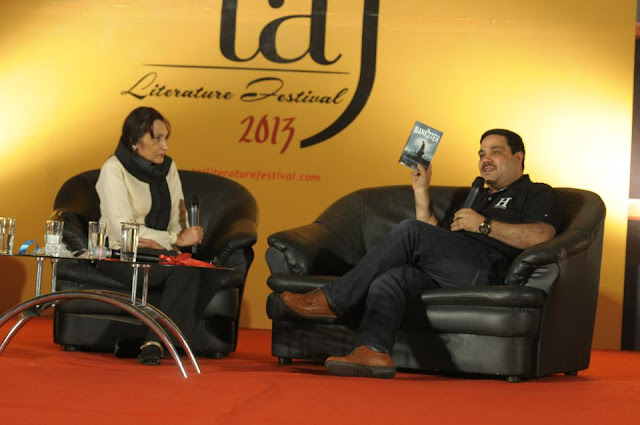 The other session I liked was Ravi Subramanian's session with  Sathya Saran. Sathya Saran is  writer I have always admired (I loved her book ' From me to you' ) and she conducted the session with all her expertise and grace. Ravi's novels are set against the backdrop of  foreign Banks where he has spent many years of his career. When asked if he would quit his career to become a full time writer, he said that he would never do it, as then it would become his full time job and he might not enjoy it as much. And then he said "And if I quit where will I get the fodder from, man?"  That earned him an applause from me. 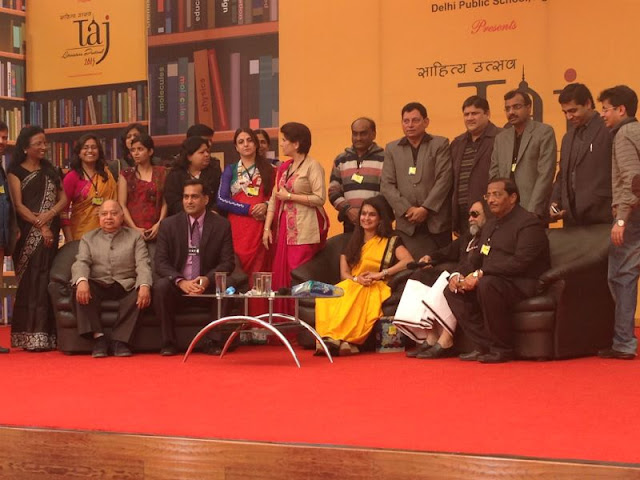 I was told by everyone that they totally LOVED my session , and after my session, I was mobbed for autographs. It is the first time in my life that I have been mobbed. People were thrusting blank slips of paper and requesting me to sign.  I must have signed at least a 300 autographs that day and posed for as many photos. 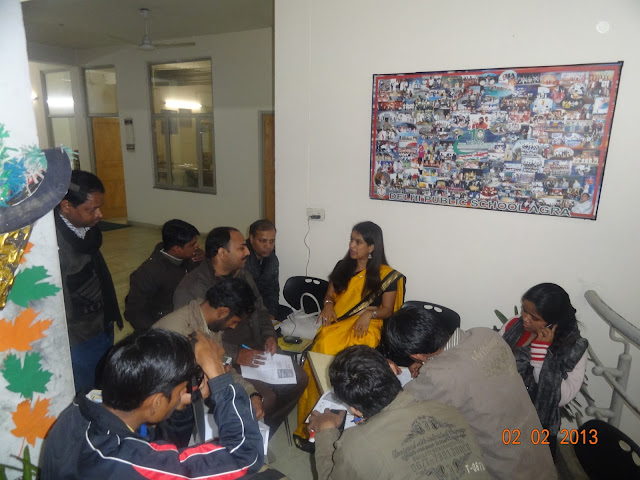 Then I had the Media interactions. The reporters were all speaking 'shudh hindi' and they surrounded me, making me feel like some kind of a Bollywood starlet. They asked me all sorts of questions in Hindi and I replied in half in Hindi, and partly in English (when I couldn't get the apt Hindi word). I was quoted in almost all the major newspapers in Agra  and not just quoted but a whole story at that! I was stunned. Click here to see the clippings of Hindi Newspapers which quoted me :)


We had a dinner that night, againt the backdrop of the Taj, with ghazals being sung. We had to trek up a hill in the moon light to reach the venue. Our cars were allowed only upto a certain point , and then there were buses took us to the foot of the hill, from where we had to trek up. 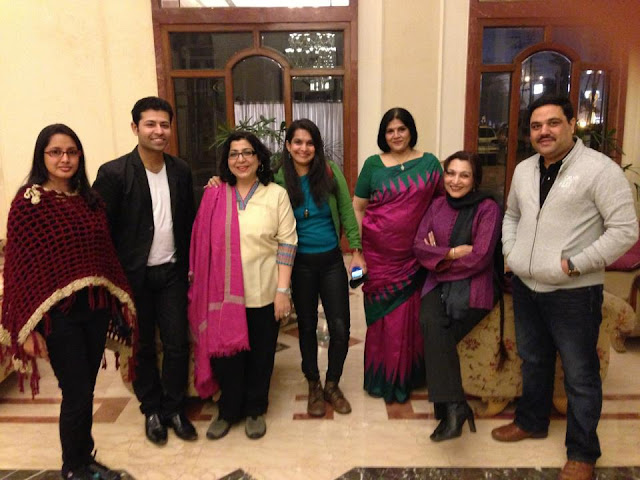 It was a marvellous experience.  I have always read all columns written by Vinita Dawra Nangia and I love her writing. It was fantastic to meet her and interact with her. Her book 'It's your life' has recently been launched and I do wish her the very best for it. (The book is a collction of her very popular columns from Times of India, and so if you like her columns, you are sure to love the book.)

I also met Milan Vohra (who is a good friend--she had launched my last book 'Tea for two and a piece of cake'). Milan has come out with a new book 'Tick-Tock we're thirty' and it was launched by Shoba De at the lit-fest. It was also nice meeting a young author Ankur Chawla, whose book 14 hours is about the horrifying incident which happened at the Taj hotel in Mumbai. Ankur was working in Taj on that fateful night and his book is his experience of those horrendous fourteen hours.

I left Agra on 3rd morning and it was one of the most frightening drives I have ever had. This was my view from the car. 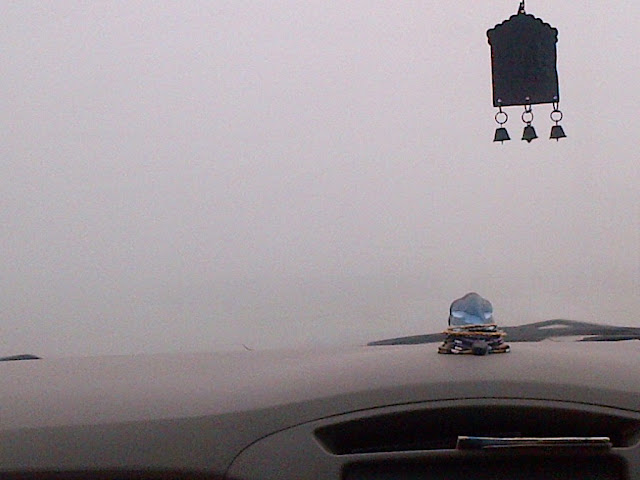 Because of fog, there was zero visibility and there had been a 20 car pile up and many accidents. 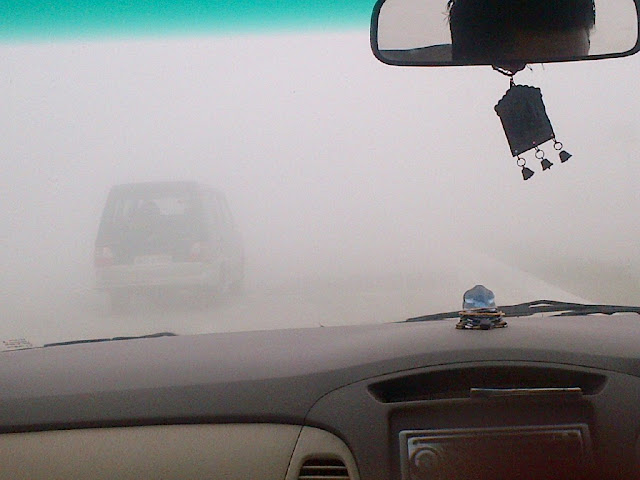 I said a prayer and hoped we would make it safe. I was travelling alone in the car, and fortunately my driver was very skilful and drove really well. I heaved a sigh of relief when I reached Delhi airport safe. 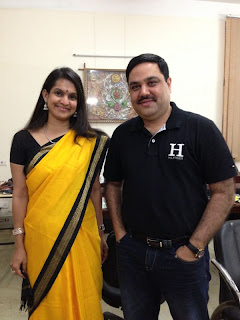 My friend and co-author Ravi Subramanian has written a really interesting post about the fury of the fog and the lesson learnt. You can read about it here.

I was glad to have got back to Namma Bengalooru.
The cliched phrase 'Home sweet home' took on a deeper meaning that night..

My children and Satish had been really missing me, and I narrated in detail over the next one and a half hours, my experience at Agra.

This is of course my personal narrative.
Here is the link to a very well written news report on the Agra lit fest: