A little note from me to you about a not so little thing.

May 11, 2011
We were expecting a good friend for dinner that evening. Satish and I had finished all the preparation for it. I had rushed upstairs to my bedroom to change, when I  saw my laptop lying open and I could not resist checking my twitter stream. A tweet I got in my timeline, made me sit up and take notice. It was from someone I do not even know.Someone whose twitter id is  @Ronald_3847  had tweeted that my second book 'Life is what you make it' has made it to the longlist of Vodafone-Crossword Book awards! It was announced on IBN Live . He had even given the link. I was so excited I could barely speak. With a pounding heart, I opened the link and sure enough, my book was there on the long list.

I flew down the stairs (yes, really flew) and hugged Satish and I started crying. I was so emotional. He had no clue what had happened. "My book is in the longlist, it is mentioned in the longlist," was all I could manage to utter.A few minutes later, I had calmed down and the the first thing I did was ask Ronald for his phone number which he immediately messaged me. I called him and thanked him.
He was so amazed that I actually bothered to. This is what he tweeted:

"Wow!! just got a call from the author of the best selling book@preetishenoy herself..thank u so much M'am. It means so much!! "


To me, it seemed the most natural thing to do. I never even thought I had done a 'big thing' by calling him up and thanking him. The way I saw it, he was kind enough to care to inform me. He had read my book and had loved it and he was genuinely thrilled for me. For me, that was all that mattered.

I also expressed a heartfelt thanks to two of my closest pals who had helped while writing the book. Then I promptly burst into tears and cried some more. Forunately  the friend who came for dinner provided enough distraction  and he was overjoyed to hear the news too. This is what he tweeted:

My friend @preetishenoy's novel topping all charts. Its called 'Life is what  you make it'. Way to go Preeti! Proud of you :)
How much I wish  my dad was alive to see this day. He would have been ecstatic and I can picture him proudly telling his friends about this achievement of mine. It would have meant a great great deal to him.

The best was yet to come though.There was another surprise in store for me. A week back, the book made it to the best seller list on Flip-kart and yesterday, it made it to Number three position where it currently stands.

The mails that I get praising the book have now increased threefold. I am so overwhelmed with the response this book is getting and I am humbled and moved by how much it touches people. A large number of people ask me if Ankita (the protagonist of the book) really exists. As is mentioned in the "Author's note" which appears at the end of the book, the answer to the question is 'Yes'. Real life Ankita indeed exists and her story is a true one. It was a story which I simply had to write, as it was a powerful and a deeply moving tale and a very inspiring one at that. Even as I write this, the real life Ankita leads a full and complete life, despite her Bipolar Disorder (BPD). 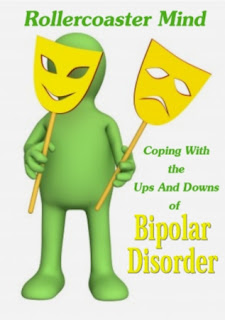 There is no cure for Bipolar disorder but it can be managed and what is needed is people (family and friends)  closest to those having BPD need to be aware about the dos and don'ts  (a really useful link worth reading) if someone close to them  has it. BPD is also associated with a high degree of creativity. Several celebrities have it (recently Catherine Zeta Jones was admitted to the hospital for it) and it has also ended up taking lives of those who have it. I have spoken about it in my radio indigo interview here.

Among the tonnes  of mails that I have got so far, I am reproducing below  a mail from Varsha Tiwari  (with her permission of course). which kind of sums up so well what most people say in their mails to me. This is what Varsha said:


Hey Preeti,
Firstly, congratulations on your second book. I finished reading it yesterday. Liked it. Loved  it. One really weird thing happened while I was reading it. I cried. I don’t cry watching movies!!! I didn’t cry watching Titanic or Taare Zameen Par either! (Don’t worry, I am not stone cold :-):-)) .. Just that while I am watching a movie , or reading a book somewhere in the back of my mind I know that all this is not real. But I do not know what happened while I was reading 'Life is what you make it'.
Actually, I’ll tell you what happened. I felt Ankita was actually telling me her story. I forgot I was reading a book. What I want to say is that so genuine were the words and the way they were expressed, that it didn’t feel they were words on paper. They felt like the voice of a girl really talking to me.  I was so identifying with her in the beginning (especially the part where she says that there is a liberating feeling being in an all girls’ environment .. me being from an all girls’ school myself!) that it felt I already knew her.
Somewhere I also realized that if you have made her sound so genuine, then writing her inner most feelings would have definitely taken a toll on you. Did you feel a slight heaviness after you would intensely write the suffering part ? I am sure you must have. But a good good job!!
I somehow did not really agree with the title of the book considering the story. I mean please don’t mind but Ankita was extremely helpless when she was suffering. Yes, she did later do what she felt was her true calling ,but for that tough phase , life was not what she wanted to make it. Just a small thought I wanted to tell you. You don’t really have to consider it :-)
But, I loved your writing style and thank you for not writing a silly chick lit or a story about IITians or corporate ppl. Thank you for sharing a lovely story with all of us. God bless you :-)
Varsha
Well, to Varsha and to everyone of you who has read the book, I do want to say that it felt so real, simply because it was!
I do feel very grateful about the adulation and love I receive from all of you. Writing is a very solitary occupation and one has to travel to that dark place inside one's own head even when one does not want to go there.
Your words, your praise, your comments do matter and they mean such a lot.They make me want to write more and more and they really do keep me going.(I have started working on my 3rd book now)
Thank you so very much.
With love
Preeti