September 21, 2009
Most people love surprises.There are a few who consider surprises a great inconvenience and a foolish thing because it makes them deviate from their pre-planned routine which they adhere to, tighter than a lycra skirt worn by a teen at a first date to a disco. Almost all children do. Love surprises that is, not the tight skirt.

A friend of mine used to tell her husband that he has to bring a surprise gift for her when he travelled. Sometimes she would even specify what the surprise gift should be . :-) He always obliged.

What is life if there is no element of surprise? It would be staid, predictable, routine and boring.Of course, the people who hate surprises would argue that there is comfort in familiarity and people like me who detest routines will swear that the opposite is true. Naturally, this way of thinking has passed on to the spouse who surprises me with flowers every now and then and who also surprises me with the delicious meals that he cooks. On days that I am out of the house in the evenings, is when I am surprised the most. The children are fed and tucked into bed long before their bedtimes, a task that I struggle with, routinely. I don't know how he manages it but he does. It is only the danger of my position as chief cook and story reader becoming redundant due to his extreme efficiency which makes me reluctant to outsource this job to him, permanently. Besides, if he did it on a regular basis, it wouldn't be a surprise would it? ;-)

My daughter is the master of surprises. Almost all days she has a surprise for me when she comes home from school. I wait eagerly for the time that she comes out from her class in Pavlovian anticipation of a gift from her. She never disappoints. She usually will have something that she has made in the class.
Her eyes shining and a wide smile spread across her face, she will say " Ma--guess that I made today?"
Each day I think of new things to 'guess' which can be as off track as possible, ranging from flying saucers to mooli paranthas to high heel shoes.

"Ma--how can I make that? Now guess really," she will say.
I will pretend to think really hard and then I say that I give up.
She will usually give me a drawing or a model that she made in class.

"Ma--it is just for you," she will say with all sincerity and hug me tight.
After five minutes she will invariably ask if she can also give it to her dad and her brother and whether I would feel bad as she had given it to me first. :-)

It gives me so much joy to see her face lit up. She will then anxiously ask me if I like it.
How can I not?! My heart fills up with warmth and love, looking at the pictures she makes for me as 'gifts', which usually have innumerable details. (I shall post them on the blog someday)

Yesterday she had a slightly different surprise for me. It was a paper bracelet with a 'gem'. There was only one 'gem' in the box from which the children had to choose the beads and accessories, that they could use. Another girl had chosen the gem but my daughter told her that she very badly wanted it to make something very beautiful for her mother. My daughter says that it was the best day in her life because the other girl agreed to let her have the 'gem'. She made a bracelet for me, which goes around my arm, not my wrist. She was delighted to see me wearing it (see photo).This was one gift she did not want me to share with her brother and father. 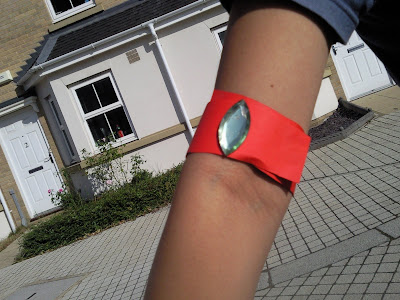 Yesterday I too had a surprise for her. A few weeks back, she had taken part in a competition at the Children's library where she had answered a few questions about BFG which is a Roald Dahl book. The prize was tickets to the play which is being staged in an art deco theatre, one of the finest in UK, that can seat 1300 and it stages a high quality mix of comedy, drama, dance, operas and musical shows. The library called me to tell me that she had won four tickets!

Needless to say I had a surprise for her yesterday. :-)

I simply love suprises. What about you?

A fellow blogger, now also a friend is taking part in a contest for 'Chief blogger'. His writing is superb as many of you already know (Don't take my word for it. Click here for proof) There are only four days left for voting. It would take only two minutes of your time. Please vote for him by clicking here. I do want him to win as he deserves it totally . Good luck Prashant!