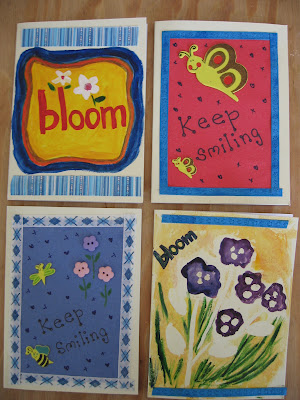 Sometime back when we first moved to UK and into this home where we’re now staying I was happy as well as sad, elated as well as a little depressed, joyous as well as sorrowful. It was truly a bag of mixed feelings as the move was definitely for the better, but I hated leaving everything familiar behind and starting life in a foreign land. We have been married fourteen years now and have moved several times to different cities but it was always within India. So wherever we went, my collection of plants and whatever pet(s) I happened to have at that time also moved. The best memory was my forty little guppy babies and the mother and father fishes arriving safely from Pondicherry at Bangalore, in a huge red bucket along with the rest of our stuff. Wherever we went our potted plants went too. I had a lovely collection of about 35 pots that had travelled with me all over India. I am fond of plants and especially my indoor plants which I love to have in the living room.

But when we moved to UK, there was no way my plants would survive four weeks in a ship. Neither would the fishes. Sadly I had to give them away.

When I arrived I was dismayed to see the ‘garden’ here. It was a little patch of land overgrown with weeds and really run down and looking miserable. The previous occupants obviously did not have gardening as their priorities. In India, I have always had gardeners to do my garden for me. Here in UK, it was different. Hiring gardeners are forbiddingly expensive and most people do it themselves.For the first time in my life, I was faced with this huge challenge of transforming a weary, neglected run down patch into something habitable. I have never ever done gardening before. I read up books about it, and asked people for advice.

Then began the hard work. It was really cold when I first arrived here. The temperatures were about 4- 6 degrees and there was strong cold wind blowing. The moment I stepped out, It was like someone slapping me hard on the face and in the beginning I could hardly bear it. But I did want a garden; I so missed the one I had in India. I was determined to have it, no matter how much hard work it involved.

First, I had to eliminate the weeds. There were more weeds than the lawn or the plants. Painfully one by one I sat uprooting each one. It was hard to squat and muscles in my body that I did not even know existed made their presence felt as I struggled with the muscles as well as the weeds. Then there were stones—hundreds of them. Again I had to pick out each one individually. Collectively they made a large sack.

Then began the process of raking the soil and planting the seeds. Then watering them. It looked hopeless at one point in time. I wondered if I’d ever have even a few flowers. Slowly they began taking a shape, began rising. And then, one fine day

I actually had grown f 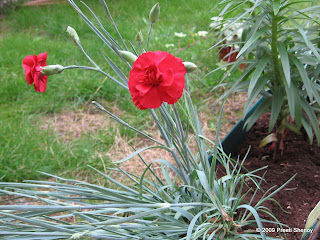 lowers!(These are pictures of my garden clicked today) I couldn’t believe it. I quite like my garden now. There is still a lot more to do, but at least the flowers make me smile.

It made me think how true it is of life too. There are situations which we go through which test us initially and then make us bloom like the flowers. It helps to keep smiling throughout. Smiling has been scientifically proven to lower blood pressure, increase immunity and a feeling of positivity. The health benefits of smiling are tremendous. People who smile more often have more friends and are perceived as leaders. A smile costs nothing and it truly enriches the giver and the receiver and spreads 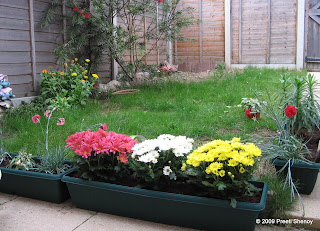 So that is the message on the four cards that I have made this time. “Keep smiling” and “Bloom”

I shall pick four responses that appealed most to me and mail them the cards. (See this post for details if you are a first time reader)

So here is this Monday’s question for you


Like I said before, if I could mail each one a card, I would. But since I cannot I had to pick four. Like the last time, I am picking four which stuck in my mind, out of all the comments. For me the treat was reading what you shared. Here are the names of four people whom I will be sending the cards to. (their names are links)

Shachi:
You can't help but instantly like Shachi. She is an engineer by profession who is currently living in the U.S. She is warm, compassionate, honest, kind and very likeable! But that is not the reason why I picked her comment. Read what she wrote in my comment box and I am sure you will be moved.

Prashant Dhanke:
When I first came upon his blog, I was totally carried away by his writing. It had a certain something that I could not define. It moved me, made me think and affected me in some strange way that I could not quite put in words. His comment on this post of mine was very inspiring and motivating. I know just how much trauma ill health can cause and how valuable being fit is. It is very hard to achieve it and the effort, determination and hard work he has put in struck me as remarkable. (I have had my share too. I have blogged about it and it is buried in my archives)

Rohan
Rohan describes himself as a twenty something wannabe adman who is keenly observant, highly forgetful (and you would be forgiven for thinking they were contradictory) and many more things that made me smile. His comment about the joy and the surprise that he got gave me a high as soon as I read it and it still brings a fuzzy warm feeling when I think of it.

Meira
She lives in Gurgaon, got married recently (sorry to disappoint the single guys--she is very cute!) :-) and writes in a way that makes me smile, giggle and relate to what she has said so well. Her comment about 'transfer' of her dad's gift which inadvertently caused a lifelong love of reading struck me as perkily delightful--just like her!

Please send me your postal addresses so that I can mail you the cards.


What had been really heartening is that many of you have written to me, saying cards or no cards, it is my posts you look forward to! That is so lovely to hear! Thank you!

(And if you really don't like the idea of these cards (since only a few people get them even though all of you deserve them), please do let me know. It will save me the trouble of making more!!)

So please tell me--cards or no cards? Based on your responses I shall decide whether to make more or trash the idea.