On Rainbows,Fairies and being a Mom. 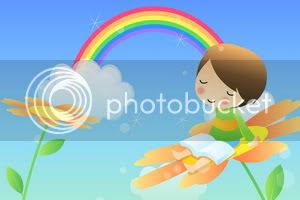 Children are great philosophers. It comes naturally to them I think, as their world view is original, often unique, not yet tainted by hard realities, failures, apathy, insensitivity, prejudice or worse, indifference that characterizes the world view of most adults.

Observing children and really listening to them and thinking about why they said certain things (Instead of just laughing and dismissing it as cute which is typically what we adults do) gives us a fresh different perspective to things. I am fortunate in that aspect as I have worked with children for many years and now I also have my own laboratory open 24 hours, seven days a week to study two children aged 10 and 7. :-) They accompany me everywhere I go, except to the loo. There too, if I am not out in five minutes I’ll have a voice pounding on the door impatiently, asking me “ Maaa—Are you in there ? When will you finish maaa? ” :-)

Both wanted to be a part of both my book launches and really enjoyed seeing a new avatar of their mom. Before the book launch, I was a bit nervous as I had not yet met R.K.Misra who was to launch my book. I had not yet checked the arrangements at Crossword, and till the previous evening, the books had not arrived at Crossword too, though my publishers had sent them well in advance. The manager at Crossword was continuously checking with the Transporters and giving me updates. In between all this, there were many reporters from different newspapers calling me up for Interviews.

We took a flight from Pune to the previous day, and suspended at 30,000 feet above sea level, somewhere between Pune and , I forgot all my worries as I watched both my children. My daughter was very pre-occupied and was looking out of the window constantly as though she was searching for something.

“No mama.” She said “I am looking for God. My friend told me to watch out and that if I see God I have to tell her too.”

I smiled and let her be.

After a while I saw her opening her book to read.

She looked at me conspiratorially, smiled and pointed to her older brother. “He told me the truth.” She said.

“What did he tell you?” I asked

“No mama.” She said as though, she was an adult and I was the child “God does not live in the sky. That’s why you cannot see God.”

Later I asked my son what he had told her.

“The truth of course” he shrugged nonchalantly.

“And what is the truth?” I persisted.

His answer like many things he says, astounded me. He said “God is formless. He/She is just a higher power or positive energy. You cannot see God as God can be in any form, but you can feel it in your heart.”

I did not know what to say to that except nod in agreement.

Today while talking to my daughter, this discussion came up about the things that are in the sky. She said that God may not be in the sky but fairies definitely are there.

“How do you know? We haven’t seen them.” I countered using their own logic.

“That’s because they are on rainbows.” She said, “And when the rainbow is in the sky we are not on a plane. We are on the ground.”

“And what do fairies do in the sky?” I asked her.

“They ride their bicycles up and down on the rainbow.” She said without any doubt and without even a second’s delay.

I am sure she must have thought about it earlier.

Her brother wasn’t around and so he did not educate her.

And hey—who am I to deny a child her imagination, a lovely one at that?

If any of you happen to be on a plane and see a rainbow when you look out of the window, do watch out for the fairies riding their bicycles up and down.

And just in case you happen to see them, say a hello from my little girl down here.