July 12, 2007
Last week, my son came back from school with gift in his hand, a letter of appreciation for his mom, and a big happy smile on his face. Both he and his sister were very excited.
“Mummy, Gift for you” they yelled, when I opened the door.

“You know Mama, your name was said in the assembly today. And the principal said that her son will collect the gift on her behalf. I went and collected it and everyone clapped.” He went on excitedly.

I did not expect it at all. I was pleasantly surprised. 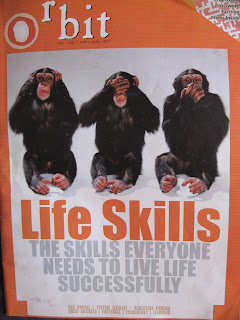 Orbit is a magazine published by Takshila Education society which runs 3 schools. An article I wrote was chosen and was published in the latest issue of Orbit. The Pro-Vice chairman had written a letter of appreciation for the article and for my writing style.

I had written an article called “Life skills v/s Academic skills”. In the article that I wrote, I had quoted the Pink Floyd song “We don’t need no education”. Funnily they have changed it to “We don’t need any education” (How can you change a famous song like that! Maybe they thought I had made a grammatical mistake—or maybe they hadn’t heard of the song!)

Later, the other mothers, whose children go to the same school, called me up to congratulate me.(They knew all about it as their kids had told them, since it was given in the school assembly)

I found it strange that some asked me if I really wrote the article! The conversation went something like this.

Caller: “Congrats. My son/daughter told me”
Me: “Hey---Thanks. I appreciate your calling”
Caller: “Did you really write it?”
Me (smiling): Of course I did.
Caller: Every word?
Me (smiling wider): “Every single word”
Caller: “Tu tho writer hai, yaar” (Hindi for “you are a writer. ‘Yaar’ is term used commonly for friend)
Me: Thank you!

I wouldn’t even dream of copying from elsewhere and passing it off as my own. I am too proud and too honest for that!

It was a nice gesture of the part of the school authorities to acknowledge it publicly.
And I felt happy, that what I had to say was considered worthy of publication. 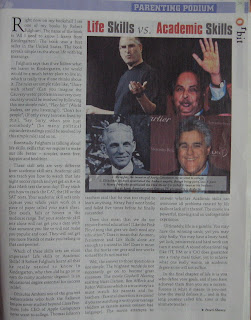