Its not about the bike! 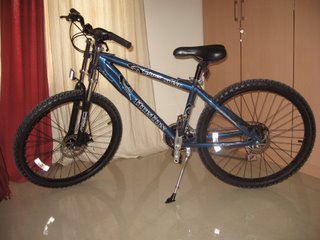 I don’t know how many of you have read the book “It’s not about the bike” by Lance Armstrong. It is an inspiring true life account of Human spirit and determination.

I’ve always loved any kind of outdoor sport, and cycling is no exception. There is something joyous about struggling hard to pedal uphill, on a cycle, using every muscle in your leg that you never knew existed , reaching the top, drenched in the sweat of your efforts, and after you have reached the peak, flying downhill at break neck speed , with wind in your hair ,a smile on your lips and a song in your heart.

It’s my son’s ninth birthday today and he didn’t want a party—He just wanted a Firefox. For the uninitiated, am not talking about the internet browser firefox, but the bikes! After I went and looked at the bikes, I fell in love with them and we finally settled for a Firefox Viper.(That’s the picture and the bike was brought into the bedroom for the photo op!For a better picture click on http://firefoxbikes.com/viper.htm ) It is a lovely bike and I agreed to buy it for him only if he agreed that it was his AND my bike! ( Poor kid! What choice did he have? He wanted it so badly)
And since the Firefox station is closed on Sundays, we bought it for him on Saturday evening itself even though his birthday is today. Ever since then, my son and I have been riding it in turns! It has got 6 gears on the right side and three on the left. It is a superb all-terrain bike and it is perfect for the place we live in, as we live on a hill and there are a lot of slopes. The model we bought is a lovely one and since my son is tall for his age, he handles it with ease, even though it is a 26” bike with steel and alloy frame and disc brakes as well.

Oh –to say it is a joy to ride, is an understatement. And now I share a passion with my son. Both of us gaze in admiration at it, and compare notes about which slopes are ‘cool’, which ones can be done without getting off the bike and pushing it (some of them are really steep) and which gear is the best to do a “wheelie” and of course who is a better rider!