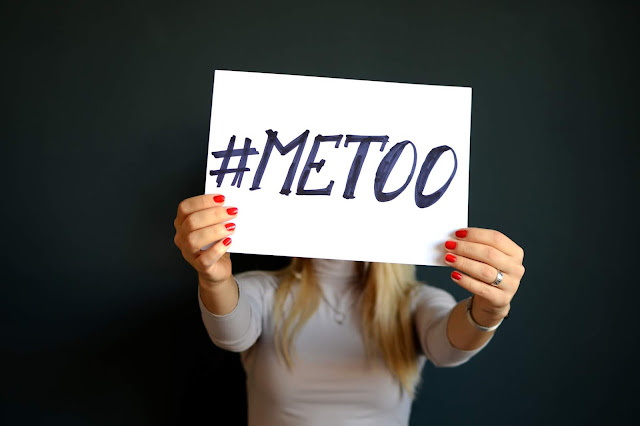 The last few days have been tumultuous for everyone in urban India. If you are a working professional, or have worked at some point in your life, or if you strongly believe in gender equality,  it is hard to not get affected by the #Metoo movement. The #Metoo movement has taken off in India, like the  metaphorical snowball. I too, like many of you,  have been following closely, in shocked silence, as it has been unfolding. I can't tell you how happy I am that women in India, are standing up in solidarity, taking back their dignity.

Several  powerful men have been named. The stories have come POURING out.
I shall not go into details of the men named or the incidents here, as it is all over the media.

When something happens in your field of interest, it is natural that it affects you more than the incidents that happen in other fields. For me, what has been particularly disturbing was that the names from the field of literature that were coming out as well.

Earlier, in press interviews, whenever anyone asked me who my favourite Indian writers were, I would usually name Kiran Nagarkar, along with Shinie Antony and Anita Nair.

Many years ago, at the Pune International Lit fest,  I remember being so excited when I spotted him. It was a complete 'fangirl' moment for me, and for the first time in my life I understood why people get excited when they see me, and they want to click photos with me.
I walked upto him and told him how much I admired his writing. He thanked me and  asked if I wanted a picture and of course I did. This was the ONLY time I  have clicked a picture with someone I totally admired, but didn't know. His writing was brilliant and I considered him a 'literary great.'

But no more. I will not be reading any further books of his. I was disgusted when the allegations against him came out by multiple women.

Next to be named was Chetan Bhagat. I was  a part of the first #WriteIndia campaign along with Bhagat and 9 other writers.

I am friends with all the writers you see in the above video. 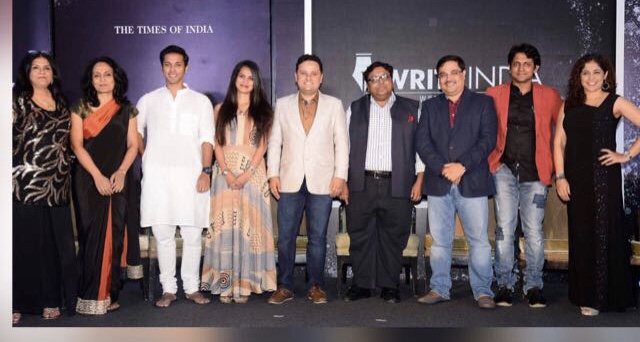 If you want to see more pictures from that event, you can go HERE.

I must at this point, clarify that I have nothing against Chetan Bhagat.
In fact, I  have also defended Chetan Bhagat , in my column in Financial Chronicle, when accusations of plagiarism came up against him. (I still stand by everything I have said in that column.)

What disturbed me more than the allegations, were his two notes of explanation which he released on Facebook.  In the first, where he was responding to screenshots of a conversation that was released between him and a lady he met,  he apologised to his wife, clarified that he was only human, and he felt things which probably he shouldn't have felt. I let that go. The screen shots which were shared could be dismissed as flirtations. They revealed nothing. He was being honest. It was between him, that lady and his wife. I let it go.

Then another sprung up which could not be termed anything but harassment related to work. 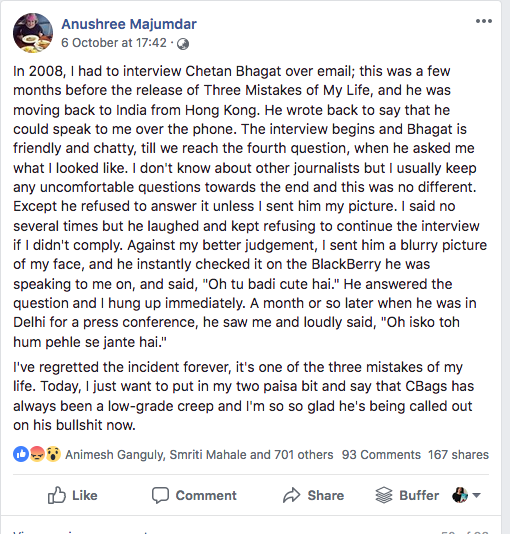 Surprisingly, the above one also was dismissed. To me, it appeared a clear cut case of work harassment. People arguing that she could have refused, she should have walked away and not sent him a photo etc, are missing the point. She is a journalist who had to get that interview. It was WORK, for her.

Then there were allegations by Sanjana Chauhan who in addition to being a News anchor and editor, is also an erotica writer.
I was shell-shocked by Bhagat's response.

You can read his whole response here:


What disturbed me, (and continues to disturb me) is how Sanjana's character was being questioned, by quoting some lines from her erotica story. How is it relevant or fair or right to do this? She can write what she wants---they are not a reflection of her morality or her character! Just because a woman writes erotica or even porn, how does it give anyone any right, to ask her such questions?
It is the equivalent of taking some lines from a sex scene in my books, and asking me if I did that in real life. I found it downright disgusting and creepy.

I found myself  in agreement with many who found the statements released by Chetan Bhagat, utterly ludicrous, like this well written one here.

Then yesterday, Ira Trivedi, came out with her piece.
I urge you to read what she says.

Here is the link:  https://www.outlookindia.com/website/story/metoo-chetan-bhagat-suhel-seth-harassed-me-author-ira-trivedi/318258


Of late, a whatsapp forward by someone named Geetanjali Arora is doing the rounds, where Ms.Arora says that strong women should have slapped the person immediately, and should have spoken up instantly.

It is  not only insensitive but also demeaning to the many women who are coming forward.
Here is why: 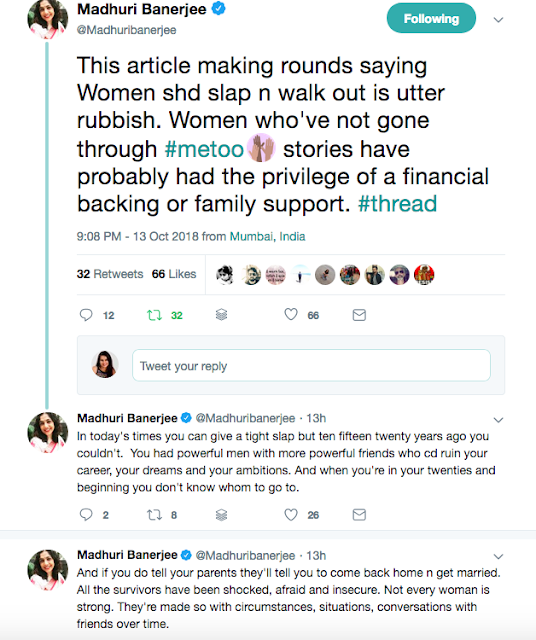 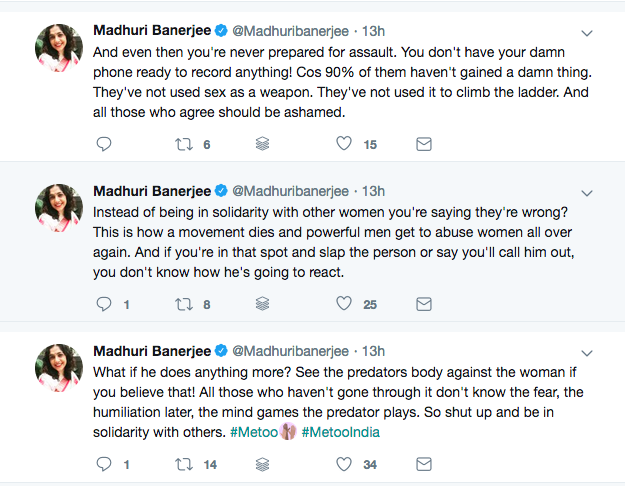 I completely agree with all that  Madhuri says above.

For all of you still skeptical about #Metoo here are four questions about #METOO which answers all the queries you may have (about misuse, about what is okay and not etc)
(Click on highlighted link to read).

It is VERY Important for ALL of us, whether we are men or women or transgenders, to SPEAK UP. (By speaking up, I mean supporting the movement; Not sharing your personal stories which you may or may not be ready to)
There is strength in numbers. For the first time, the Indian woman has found a strong voice. Be with her. Stand by her. BELIEVE her. Do not question her, even if she is speaking up after YEARS. In our patriarchal society, the change can happen only if each one of us, expresses solidarity. They are just two little words ME TOO. Yet, they contain the force of a thousand gale storms.

Only if we speak up, will we be making it safer for the next generation of younger girls, who will have to work shoulder to shoulder,  in a professional capacity with men like these.

My women writer friends, Madhuri Banerjee, Kiran Manral, Kavita Kane, Jaishree Mishra, Meghna Pant , Vani Mahesh , Suma Rao,  Nikita Singh,  Vinita Dawra Nangia--have all been strongly supporting the movement. So have women from other fields like RJ Zeishah . We expressed solidarity. So have thousands of others.

All of us  also stand by all the women who have spoken up.

If you feel about this as strongly as I do, speak up about the movement. Tweet about it, post on facebook, twitter, speak to friends, co-workers. Spread awareness in every way you can.
It is high time we put a STOP to this.
It is high time we BREAK the unspoken rules.


Photo by Mihai Surdu on Unsplash