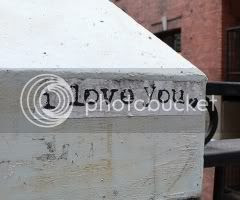 This morning I read something interesting on 'The Speaking tree' which is a Sunday supplement that comes along with Times of India. Every Sunday,I read almost all articles in this section diligently and I always think and contemplate about what is written.

There was an article today by Sri Sri Ravi Shankar (who is a humanitarian, spiritual leader and an ambassador of peace) who founded the 'Art of Living movement.'

Among a lot of things he said, what made a deep impact on me were the following words:

How true! What a profound observation!

What is it about the words 'I love you' that scares most people? Is it so hard to accept that one is loved? Has cynicism seeped so much in, that it seems almost impossible to believe that someone can love us? Is it that we think 'oh-my-god.what does he/she want now? Why is he/she saying 'I love you'. Does he/she mean it?'


Why do we question ( at least most of us) the veracity of these words and why don't we just accept?

In my teens and in my twenties, I found it very hard to say these words. I suspect it is the same for people from a certain time, brought up in a certain culture. We did not go about saying 'I love you' in my family. (I was certain that as and when I had my own children that was truly not how I would raise them but this post is not about that.)


When said with sincerity and true depth, these three words are powerful indeed. They seal a bond. It is an unconditional acceptance of the other, with all their flaws. The magical thing about saying ' I love you' is that it need not be between lovers, but just between two souls who're deeply connected at some level--a mother and child, sisters, brothers (two men I would presume would find it hardest to actually say them), best friends.

The Speaking Tree also had carried a small piece called 'Do it now' by Dennis E Mannering about an exercise given by a  professor to his class of adults. They had to say the words "I love you" to someone they had never said these words to before--what is more, they had to completely mean it too. Most people in the class were initially annoyed (after all saying "I love you" is an intensely personal experience and nobody can direct another to say it) but decided to do the exercise anyway. What followed was a moving experience.

Some might argue that saying the words is just 'not them'. They might say that they do so many actions to prove their love (for example a spouse lovingly waking up the other with a cup of coffee), then why should they say it, especially if they are uncomfortable with it.


I quote from my earlier post  which spoke about it.


The fact is that three simple words "I love you" when said, when you really mean them, have the power to uplift, to heal, to comfort, to calm and reassure. They are very powerful words indeed. All humans long to hear these words. They show an unconditional acceptance  of the other person and create a powerful shield around their vulnerabilities.

If you hear these words often, you are blessed indeed as there are so many who crave to hear it but have noone who will say these words to them (Think about it). Of course, if these words are casually uttered and if you say it to all the people you meet, then they do cease to have any meaning at all.