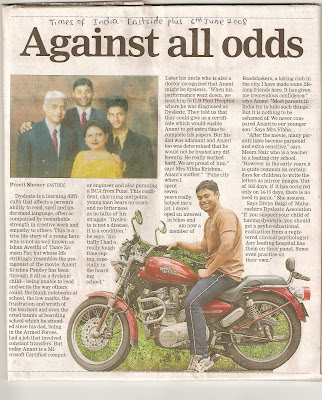 If you haven't watched the movie Taare zameen par, I recommend that you stop reading and watch it right now.If you do not understand Hindi, watch a version with sub titles. It is a movie which cannot fail to touch you in some way.The hero of this movie is a young child called Ishaan Avesthi who is dyslexic.

Imagine my surprise, when I came across a real life Ishaan Avesthi, when I was asked by Times of India, Pune to do an article on Dyslexia. While researching my story I discovered Anant. I was so moved by his life , I just had to tell you all. His life was eerily similar to the protagonist of the movie, including the boarding school bit. His dad was shocked to see him when he came to visit him--Anant was taunted, labelled, shouted at, beaten and if that was not enough, even put on anti depressants. His dad says he could not recognise him as his head was drooping, chin touching the chest, he had thin legs and a belly. He was looking so dead and expressionless.
I could only imagine what his parents must have gone through. I could feel Anant's pain when he told me that he learnt to answer prying questions about his marks--"Yes I got only 50%.Yes I failed." When my own son who is only 10, comes back from school after they have got an exam result I get calls from other moms asking how much he scored. I refuse to answer them (Most of the time my son would have got marks in nineties, out of hundred--and though I do feel happy I never tell other moms) I feel really bad for those children who are being compared constantly and I refuse to fuel it. Anant's mother was so strong and his dad was so supportive. Most importantly they had the courage to stand up for Anant and face society. They never compared him with his younger brother who does very well ,academically.

A person is so much more than the sum total of his marks. In India, increasingly academic excellence is given so much importance and toppers (especially the ones who make it to the supposedly hallowed portals of IIT) are glorified, almost deified. In such an atmosphere, I could only think of what guts and courage it must have taken for his parents to hold their own.

When you see Anant today, he is charming, confident and bears no scars (and is one hunk of a guy). He worked extremely hard to overcome his condition. I really admired his spirit. The newspaper article that I wrote had a word limit of just 450 words. So I had to blog about it.

What I have uploaded is the the published article (click on it to enlarge and read) which appeared in Times of India's Eastside plus, on 6th June 2008. It just proves that hard work and determination can indeed work miracles. If you want to make a difference in your life, you have to make that difficult journey and it all begins with a small step.


Talking of journeys in a different mode, I am going on one tomorrow. I am going here and am really looking forward to it. So I will not be able to visit your blogs or update mine for a while as I will have limited Internet access there. Of course I will be writing about it :)

See you all when I get back.