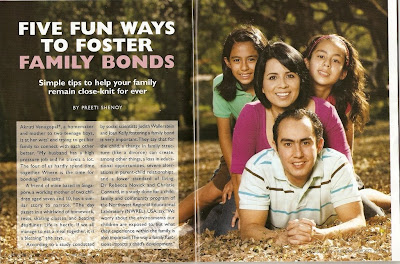 
Chances are that if you speak English, no matter which country you live in currently, you have read at least one copy of Readers Digest. (Or at the very least flipped through it)
Although Reader's Digest was founded in the U.S, its international editions have made it the best-selling monthly magazine in the world. The magazine's worldwide circulation including all editions has reached 21 million copies and over 100 million readers.
Reader's Digest is currently published in 50 editions and 21 languages and is available in over 61 countries. It also happens to be ’s largest selling English magazine.
It is a monthly general interest family magazine that stands for quality writing and has been around since 1922. For me memories of it are indelible as they are associated with my childhood.
It was in 1981, when I was about nine that I first stumbled upon Readers Digest. My dad had a huge collection which he had hard bound. He had issues from 1971 to about 1978. It was great to find them and see products advertised that no longer existed! It was like going back in a time capsule. I read them all. I devoured each word. I laughed at some jokes which I didn’t understand (I was only nine, remember) because I felt very important reading them.
Some of the stories inspired me. I marvelled at the way some people wrote—the language, the wit, the clever puns, and the style. I soaked it all in. There was one underlying thread in almost all the articles—values. Readers digest stood for values like honesty, courage, positive attitude, generosity, kindness and a human spirit of love and understanding and strong family bonds.
I never thought that one day I would be writing for them. The latest issue of Readers Digest Joy which piggy backs with Readers Digest is now on the news stands in India and Nepal—and it has an article that I wrote—“Five fun ways to foster family bonds.”
It was one piece that I truly enjoyed writing and had worked hard at it. Even though I write regularly for Times of India’ s edition in my city and also for a few other magazines (so seeing my name in print is not exactly new) I was still delighted to be associated with Readers Digest.
I wished my dad was alive to share my joy. He would have understood what it meant and would have been so proud. Somehow when people tell me that he is watching wherever he is, he is with you in spirit etc, it just doesn’t work. It is also ironical because I had first started writing, to get over the grief of losing him. I so miss him. I so miss talking to him.

The unchanging fact is he is gone, and there is nothing I can do to bring him back.