What happened when an annonymous person sent me flowers. 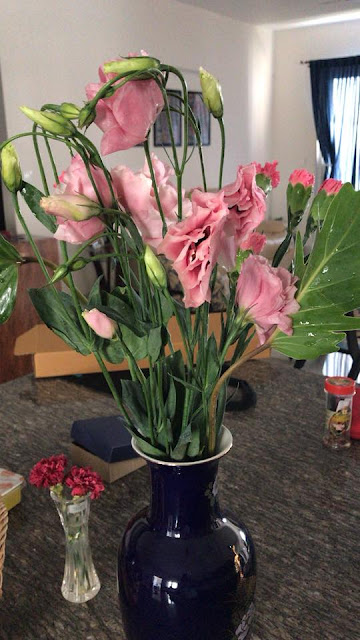 This morning when I returned from my walk, a pleasant surprise awaited me. It was a gorgeous bouquet of pink flowers, the very same ones you see in the picture above.

'Who has sent these?' I asked my husband.
He shrugged, ' It was there when I came back after walking the dog,' he said.

I looked for a card, and there was none. It was an anonymous mystery sender.

'I am sure you sent it, as a surprise! And you are pretending that you haven't,' I told my husband.
'No, I actually wanted to get you flowers, but I didn't get around to it. I didn't send it. Must be one of your friends,' he said.
I was puzzled. It had to be someone who knew my residential address, and  I wondered who it could be.
'Perhaps it was wrongly delivered, and it was meant for someone else,' I said.
'No chance. How can anyone wrongly deliver these flowers? It's someone who has sent it for you,' said  my husband.
I asked one of my closest friends if he had sent me flowers (as he has done so in the past),but he said it wasn't him.

But it led to a volley of comments on Facebook.  My friend and fellow author PG Bhaskar  asked if it could be Satish, my husband. 'Of course not, I checked with him before posting this here,' I replied.
Satish commented that flowers are passe, and he expresses his love every day. PG Bhaskar agreed, and sent me a link to a beautiful article he wrote on Khaleej times.

Someone  else commented saying that it might be my secret admirer. I replied 'A secret admirer who knows my address? Creepy!'
It led to further comments.

Many people commented asking me why I couldn't just enjoy the flowers without getting into who had sent it. They said, if they were in my place, they wouldn't have bothered, and would have been content with the flowers.

I thought about it The flowers were very beautiful. One part of me, wanted to keep them. Whoever delivered it should have checked before delivering it. It was not my job to find the anonymous sender. They should have included a card or a message. But another part of me said 'What if the flowers were meant for someone else?' My conscience did not allow me to let it slide. Also, if it was for me, I did want to express my thanks. A tiny voice inside me also wanted to unearth this secret admirer. How could I just keep the flowers and do nothing about it?

I called up the security personnel of my apartment complex. He checked the register, and sure enough there was an entry for a visitor to my apartment, and there was a phone number. The security guard told me that he had tried the number a few times, but there was no response. I asked him to pass on the number to me, and I wrote it down.

I tried the number, and a person speaking Kannada, picked it up. Fortunately I speak Kannada fluently. I asked him if he had left flowers on my door-step and he confessed he had. I asked who the flowers were for and who the sender was. He said 'It is for Bhavya.The flowers were from Shiva.'
I told him there was no-one here by that name, and he had got the wrong house. He then checked the door number. It was an entirely different building that he had to deliver the flowers to! My apartment complex has many buildings and it is easy to get lost, and get confused.
'Why didn't you wait for someone to answer the door, instead of just ringing my doorbell, leaving the flowers there and vanishing?' I asked.
'Sorry M'am, I will come and collect it,' he said.

With some sadness, I removed the flowers from the vase and repacked it in the box that it came in.

My door bell rang in  about half an hour. It was the flower-delivery man who was there to collect the misdelivered flowers. He was an old man wearing some sort of a uniform, looking bewildered.
'What if I had not bothered to track you down and return the flowers? You should always check, before you deliver, right?' I asked him.

He said 'M'am, I am so grateful to you and I thank you very much for it. This is my first day on the job, and it is the first time, I am doing such a job. I would have got into trouble, if you had not called me. These apartment buildings are so confusing, ' he said.

The joy and relief on his face, as he took the flowers back, had to be seen to be believed.

I can't tell you how happy I feel now. I have probably saved a needy person's job.

Not to mention, I am happy I did not keep the flowers meant for Bhavya!


Sometimes in life, it is worth going that extra mile  and taking  the trouble to go into details. You never know what impact our small actions can have on others. 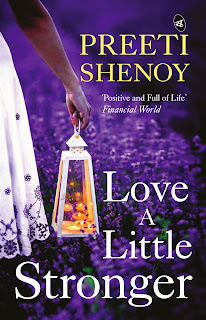 You can order it HERE