A note on my tryst with Ashtanga Yoga I have always been practicing  Yoga ever since I was introduced to it, which was when I was about 11 years old. We had Yoga in school as a part of our curriculum and my yoga teacher always selected me for the Yoga demos which he would give at various places,mostly  inside IIT campus Chennai, which was where I went to school.
I continued my yoga practice long after I left school and I would do it on my own, as I knew all the asanas. I developed my own routine. When I moved to the UK too, I continued my practice. Of course, at times there would be months and months when I wouldn't do Yoga at all, but much like old lovers  whose lives are inextricably entwined, I couldn't stay away for too long. I would always go back to my practice. 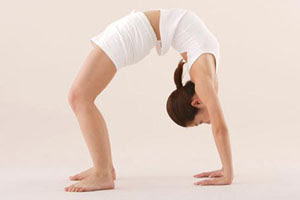 Then, after doing yoga on my own for so many years, I joined a Yoga class when I moved back to India. I did it along with everyone else in the class, but I found the pace too slow. I had many years of yoga experience but the teacher would tailor the class to suit even absolute beginners and hence I found that the class did not include my favourite asansas which are Chakrasana (wheel pose on the right) , Pashimotannasana (Seated forward bend in the picture above) and

Sarvangasana.
I would be a little disappointed and would then come home and practise these  on my own.

I longed for a Good yoga teacher who would push me more than I was capable of, so that I could grow in my practice.

In October last year, my wish was fulfilled when I discovered Ashtanga Yoga.
Ashtanga yOga has to be practised every single day, except on 'Moon days'. (full moon and new moon days')

And since then I have never been the same. Ashtanga yoga is not easy at all and requires discipline and commitment. It requires that you place your entire trust in your teacher/Guru ( and hence it is important that you go only to a genuine Guru).

At the end of first session itself, I was hooked as I was sweating profusely by just the surya namaskaras or sun salutations . (In ashtanga is called ' boiling the blood'). It is  complete detoxification for the body and extreme focus of the mind. It is a mental workout as much as it is physically demanding. Also it is a guru-sishya tradition where  the teacher decides whether you are ready to progress to the next asana or not. Sometimes you could be stuck in the same pose weeks--till the teacher decides that you have now perfected it.

Now it has been 6 months  since I started it and I can see for myself how much it has transformed me. I now find an unshakable inner strength---something that I did not have before. Every morning, Satish and I wake up at 5.15 and we drive to the yoga class. There are days when we do not feel like, but we go nevertheless---sometimes I motivate him and sometimes he does.

While there are many teachers who teach yoga, I think it is important to find the one that is right for you. In Ashtanga you can see the authorised teachers in their official website: http://kpjayi.org/

It is also important to read up about Ashtanga so that you are fully aware of how it is different and whether or not it is for you.

This is what Pattabhi Jois said about 'Power Yoga' and other forms of yoga.

"I was disappointed to find that so many novice students have taken Ashtanga yoga and have turned it inot a circus for their own fame and profit (Power Yoga, Jan/Feb 1995). The title "Power Yoga" itself degrades the depth, purpose and method of the yoga system that I received from my guru, Sri. T. Krishnamacharya. Power is the property of God. It is not something to be collected for one's ego."

Here is a video which demonstrates  the primary A and B series:


Whether you do Ashtanga or not--do try and incorporate some form of yoga into your life. (But you need to find the right instructor. Expensive instructors aren't necessarily the best. My guru charges a very nominal amount.)
Trust me--you will feel the change. You will have more control of your mind, your actions and your thoughts.

Yoga can change your life.