A jar of memories

November 20, 2012
And so I got back home on Sunday morning, having spent the last week in paradise. I had been on a vacation with family (husband and  kids, the dog being sent to a doggie-resort--yes, they have those things in Bangalore, where your dog can go on a holiday, while you go on yours).

My body, not used to the suddenness of change, of being rudely transported from paradise to the hustling, bustling, polluted metropolis, naturally protested and what an insolent way of protesting too. If I didn't need it so much, I swear I would have hand-cuffed it, frog marched it and ordered it to get well soon, which I realised will not help at all, and so I am in bed, pampering it with TLC, through gritted teeth, willing it to get well soon. I am wrapped up in two sweaters, a thick track-pant which belongs to husband, and a blanket which belongs to son, and am reclining on my bed, as I post this. Every movable joint in my body, hurts and I am suddenly aware how it might feel to be eighty four years old.

My mind cannot help but keep going back to the week that was. Oh, the memories, this vacation brought! To say they are treasured, would be saying it very very mildly. It was truly a magnificent holiday.

We had been to Andaman islands,a place which I wanted to visit for a long time, and I finally got a chance to go to. Even though Andamans are a part of India, it feels like a different world altogether. The connectivity is limited, the electricity is erratic and every single thing has to come from the mainland in ships. You can take a flight to Port Blair from either Chennai or Kolkata. Then you have to take a ferry to Havelock island, which is where most of the resorts are. (The Ferry isn't an easy journey. Almost everybody fell sea-sick when we went. We felt slightly superior as all four of us were okay and we handled the rough sea like seasoned sailors, perhaps, because we have indeed travelled a lot). If you want more information on getting there, click here.

Let me share with you, a few photos that tell the story, as pictures speak louder than words. 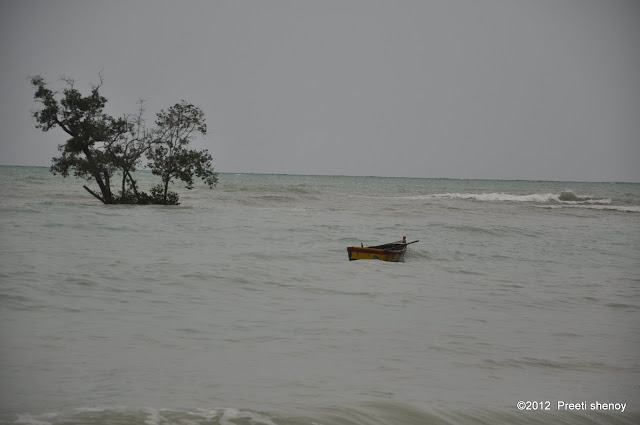 The first day that we landed, it was gloomy and grey. It was a high tide and this is what greeted us, when we stepped out on to the beach. 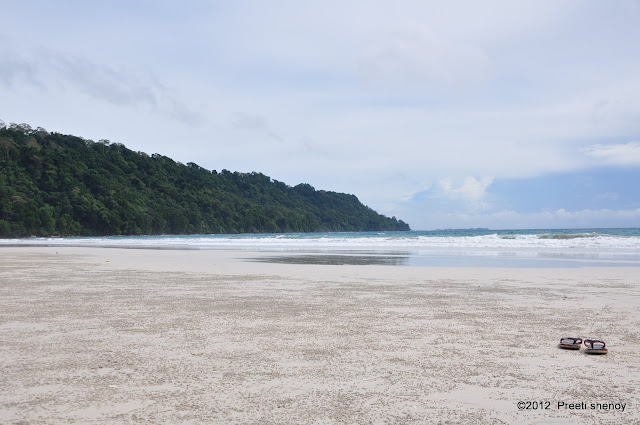 Soon it brightened up. The above photo was clicked by me, (notice the slippers in the pic? I felt they added to the composition) at Radhanagar beach at Havelock island . This beach is pristine, unpolluted and breathtakingly beautiful. It has also been named as one of the top beaches in Asia.

We had hired scooters and we drove everywhere around the island. My children were very surprised to know that their mom can actually ride a scooter (and ride it well). :) (I have driven two wheelers since I was 16 and four wheelers since the age of 17, but my children have only seen me in chauffeur driven cars :)). Half the island, came out and stared at me when I drove the scooter. I was told that Indian women do not generally drive the scooters--only the foreigners do. I found that cutely endearing. 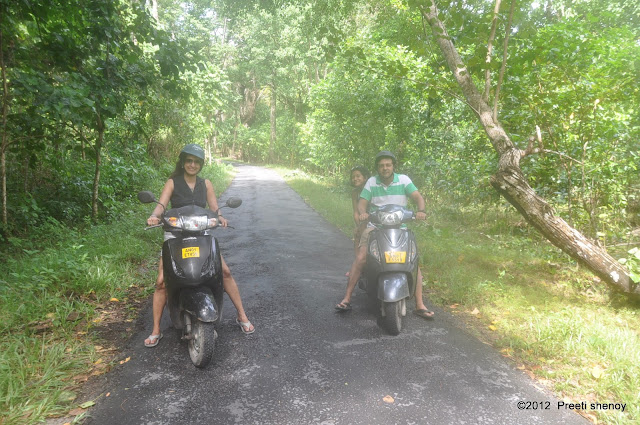 The island is very picturesque. Each scene that greets you on the road, looks straight out of a picture postcard. 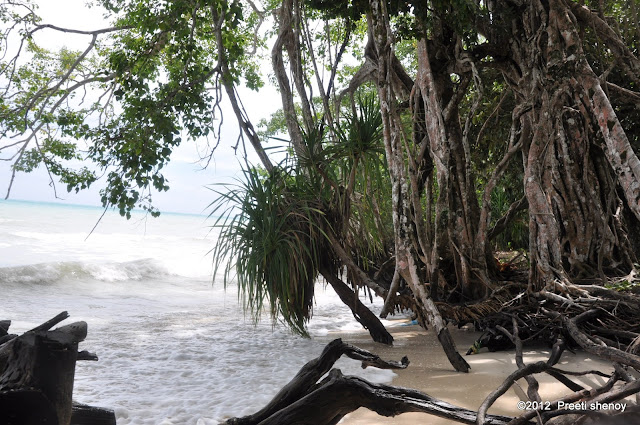 Look at the photo above? Isn't it gorgeous?

The Tsunami of 2004, had affected the island badly and you see every now and then, the effects of its destruction and how it altered the landscape forever. But I can vouch that it, in no way, has made the island less beautiful. In fact, it looks wild, untamed. 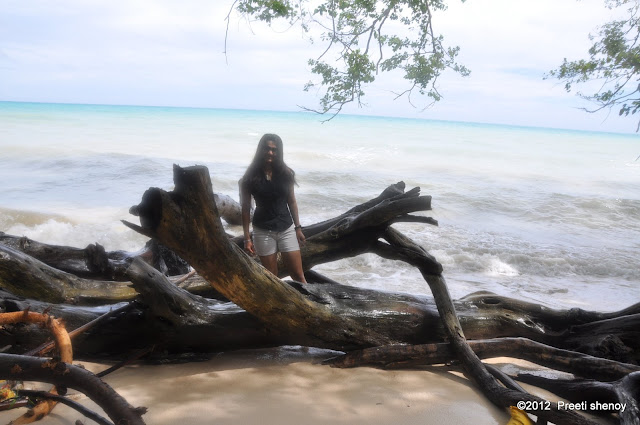 Every now and then, you will see large trees fallen like this, along the beach. 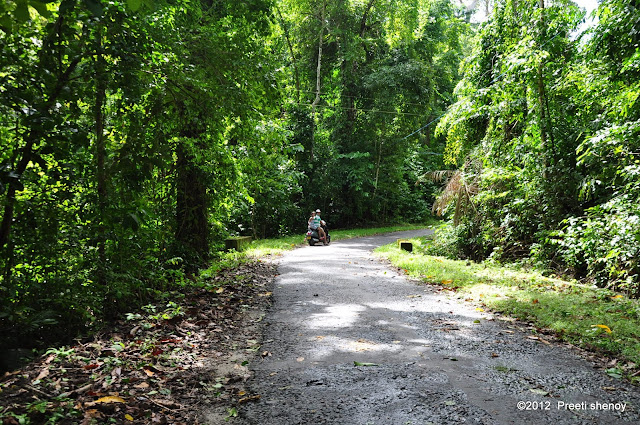 Look at how green the island is? I clicked this picture of my husband and my daughter. 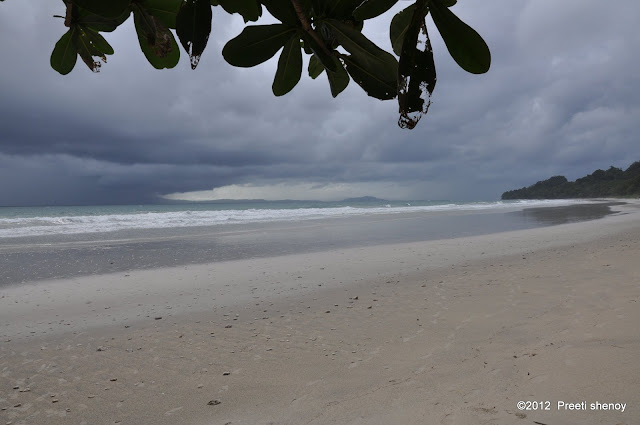 And doesn't the above picture radiate peace and calmness?

We stayed a night in Port Blair, and we visited the Cellular jail and the emotion in evoked in me, can only be described as heart-wrenching. If you do not know about the 'Kaala pani' please click on the link to read. I was moved deeply by the experience. 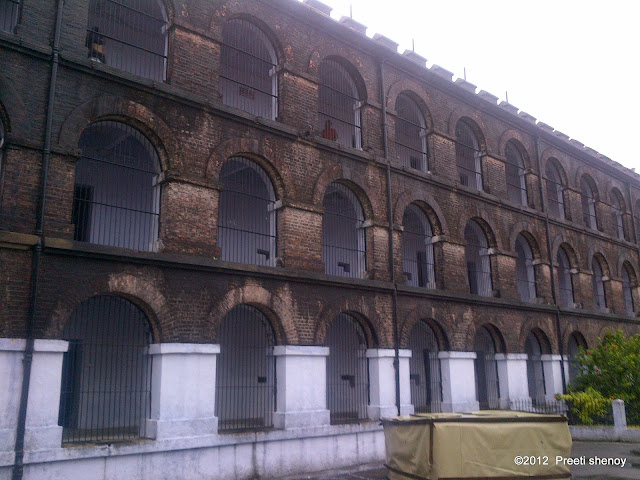 We also watched the sound and light show and I think every Indian, should really visit this place and see what the freedom fighters went through. 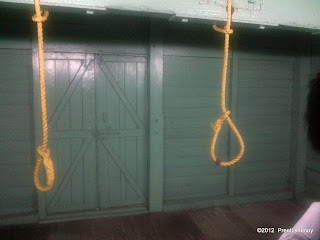 The gallows where they were hung, the methods used for torture, Veer Savarkar's cell where he spent ten years--all of it left me speechless and there was a lump in my throat, when I walked down the corridors of the prison, where a few decades before, the political prisoners had walked. The British were really barbaric. It makes your blood boil, when you visit these historical sites and see what atrocities have been committed on Indians. 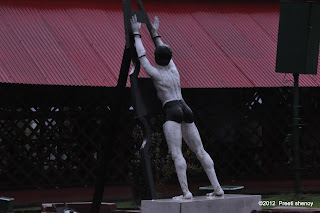 To quote from the wiki:


The British executed many rebels. Those who survived were exiled for life to the Andamans to prevent them re-offending. 200 rebels were transported to the islands under the custody of the jailer David Barry. The remote islands were considered to be a suitable place to punish the rebels. Not only were they isolated from the mainland, they could also be used in chain gangs to construct prisons, buildings and harbour facilities. Many died in this enterprise. In March 1868, 238 prisoners tried to escape. By April they were all caught. One committed suicide and of the remainder Superintendent Walker ordered 87 to be hanged


I felt a great amount of pride to read these words inscribed on a plaque on the prison walls: 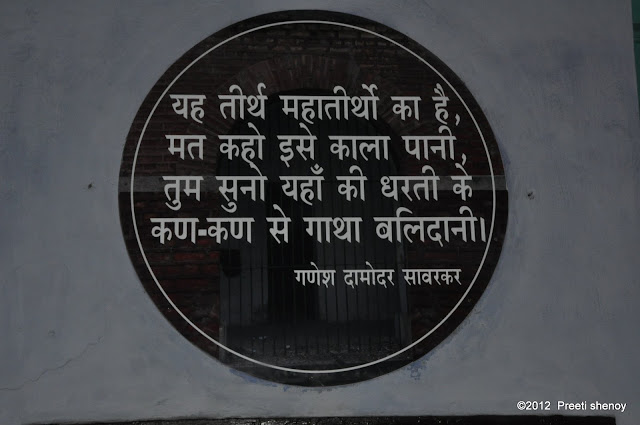 And the words of Bahadur Shah Zaffar :(click on link to read about him) 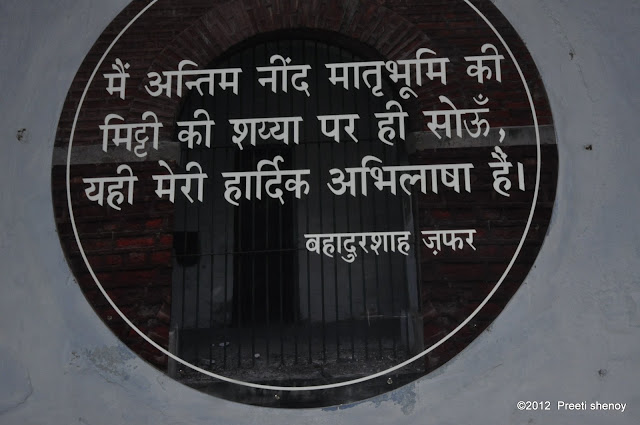 My non-Hindi speaking friends, kindly excuse. I find the deep impact of these words, is felt only in Hindi. Somehow, translating these great words dilutes them.

We returned back from cellular jail, in reflection, in quiet reverence to the great Indian struggle for Independence and valuing our freedom that much more.

We spent some more time on the beach at Port Blair, which was magnificent too: 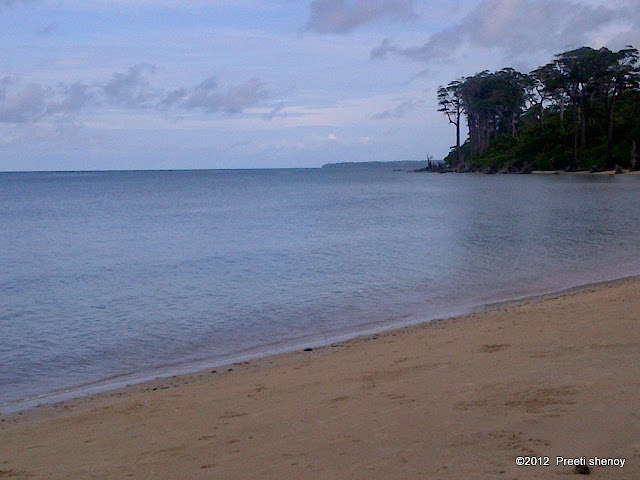 I finished reading THREE books, in the five days that I was there. Two were brilliant, one was so-so. (for those who want to know, I read 'The secret of platform 13' by Eva Ibbotson  and 'Remember me? by Sophie Kinsella' The one I did not like much was 'Thanks for the memories' by Cecila Ahern--even though I loved some of her earlier work)

My children and I, also gathered a lot of sea-shells and we intend making a jar of memories. 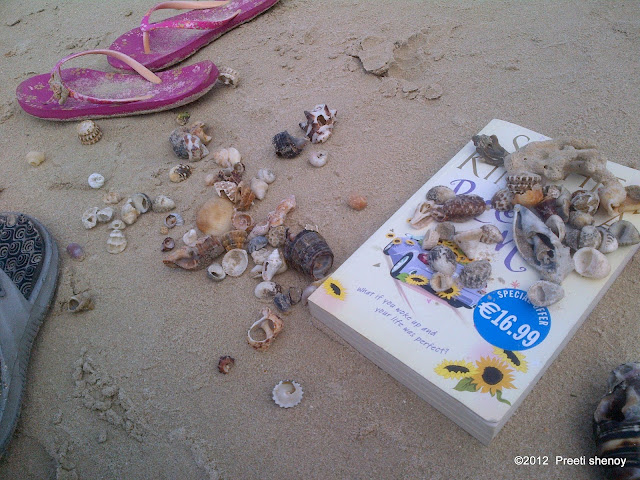 All in all, a memorable vacation. My mind is still dancing.

ps:  You can pre-order my fourth book 'The Secret wish list' by clicking here. And yes, if you pre-order from this link, you will get a copy signed by me :) (Signed copies are not available from other sites as my publishers have tied up with this one.) You get a whopping 30 percent discount and you can even pay cash on delivery. You can follow the FB page of the book too (which has got more than 690 likes at the time of publishing this post. Thanks folks!)

Here is the link: https://www.facebook.com/TheSecretWishlist