Cupcakes, a bicycle and some unforgettable memories.

May 23, 2012
Birthdays are only as special as the people who have them. If the person matters to me, then I go all out to make their day special.

21st of May was very special indeed. It was my daughter's eleventh birthday. All through the summer vacation, she had kept moaning about how none of her friends would be around for her birthday as they were all out of town. She kept telling me that she is sad as nobody is there for her to celebrate with.  I couldn't stand her genuine disappointment.
Finally I told her to just leave it to me and that I would make her birthday special. She trusts me with her life. How could I let her down?!

The one thing that my daughter loves is baking.  A few months back, a lady named Marina Charles, who runs baking and cooking classes in Bangalore, had written to me saying how much she appreciated my book "Tea for two and a piece of cake." She was a huge fan of my writing and had read all my three books. She had mentioned that anytime I want to learn baking, I am most welcome to her class.

So I dug out the old mail and a quick phone call was made to her. She was warm and welcoming on the phone. I told her the grand plan--I wanted an exclusive baking workshop for my daughter.  She suggested that she would teach her to bake five different types of cup-cakes. It would be a one-on-one session. The participant would get to do it themselves and would learn it well. At Rs.900/- for a three hour session, it sounded a steal and I immediately signed up.My daughter would have no idea about it till she arrived at the class.

When she was told what it was all about, she went WOW. She could hardly believe it.
Marina truly makes baking look like a cakewalk! She explained so well to my daughter what it takes to bake good cupcakes. 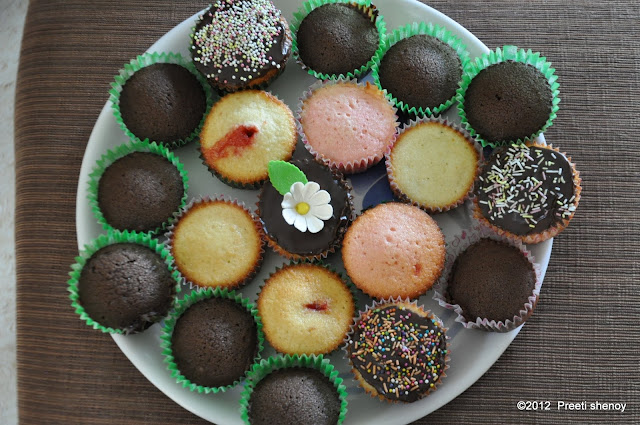 Aren't they awesome?! They were as delicious as they looked!

To know more about Marina's classes go here.
She also has some awesome recipes which she shares freely on her site.
She is also doing a 365 day 'a cake a day' project! (yeah, a new cake everyday!)

Thank you Marina for making my daughter's day really special!

Satish said that while I took my daughter for the surprise baking workshop, he would get her a bicycle which would be waiting when she arrived back. My daughter of course had no clue.

This is what was waiting for her at home: 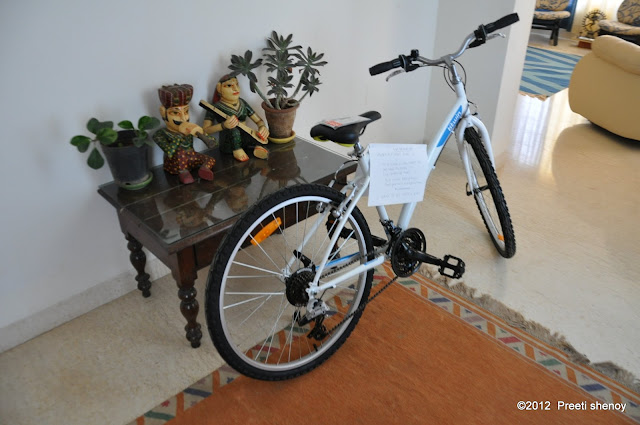 Satish had added this note which I thought was a superb little touch! It made me go awwwww when i read it. (No wonder I fell for this man seventeen years ago! He does have a way of wringing your heart!). Here is the note: 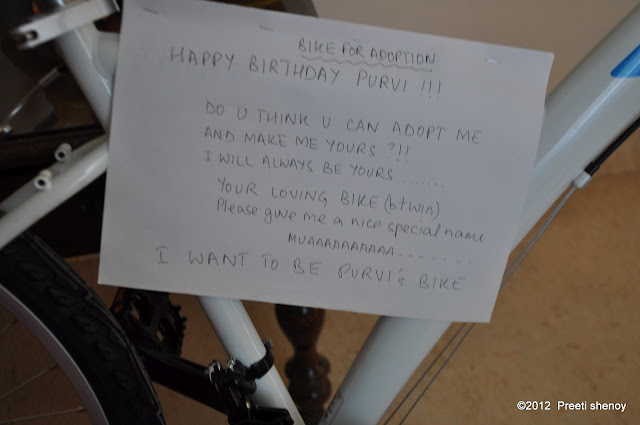 My son and Satish blindfolded my daughter and when they took off the blindfold, this is what she saw.

The look on her face was the same look which a participant in a beauty pageant has when she is told she has won the Miss.Universe title. My daughter couldn't stop exclaiming :)

Later the day was flooded with phone calls from loved ones and a good friend's son dropped  in to give her a gift.

To say that this was one truly memorable day would be an understatement.

To sum it up in my daughter's words "Maaa--this is the BESTEST birthday I ever had. Thaaaaaank you mummy!"

Like I was saying, Birthdays are only as special as the people who have them :)
This one was the BESTEST really :)


If you like my blog, you might enjoy my books :) Grab them here. (You don't need a credit card. You can pay cash on delivery) or if you are an Amazon Fan, you can grab them here
And you can interact with me on my FB page. I always reply :)