March 04, 2009
When was the last time you did something completely different from what you usually do?

Most scientific studies reiterate how important it is to deviate from routines and do things differently every now and then, in order to stimulate your brain cells and improve creativity. The older we get, the more set in our patterns we become. Routines are hard to break and sometimes we don’t even think about them.

I don’t know about the scientific studies, but it’s definitely refreshing to break routines and do a different thing once in a while. We did something really different yesterday. We (The four of us, as a family) played a nice little game that I made up. I called it 'The Alphabet party'.

“Girls versus Boys” said my son, and we agreed. So father-son duo was in one team and my daughter and I were in the other.

The game was fairly simple. We had to turn the English Alphabets (Capital letters) into a picture and then make a sentence connected to the picture starting with that alphabet. I demonstrated with A so that the others would get an idea. 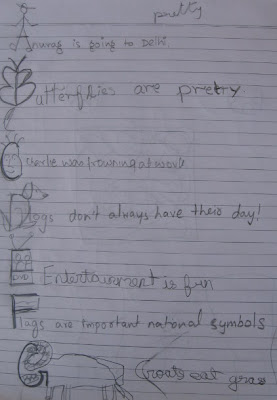 “Ladies first,” said my husband and so we started. My seven year old daughter quickly turned B into a butterfly. And then it was the Boys turn.

My husband turned C into Charlie who was frowning at work—maybe his boss had given him a hard time!

“Typically male,” I commented, but secretly I thought it was quite smart.

We had so much fun playing this game as we had to think ‘out of the box’ and think creatively.

My personal favourites were G which my son (who is 11) cleverly turned into a goat. I also liked what my daughter did with L. I allowed myself a little pat on my own back for what I did with H.

But the best of all, the one that took the prize and one which I really treasure is what my son did with M! I loved it!! Loved what my daughter did with N .I was amazed at that feisty ‘never-say-die’ and ‘never-give-up’ spirit which the picture managed to convey, which is so like her. 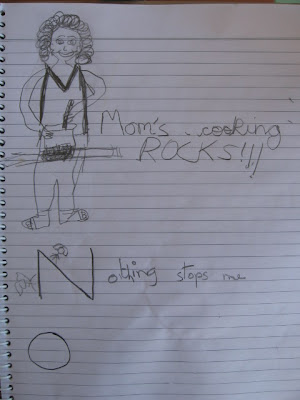 Try this game with your kids, if you have children and they are old enough to play it. Try it with your spouse if you are married or play it with friends if you are single—Or if friends do not want to play you can also play it by yourself, and see how much your mind stretches when you try!

I’d love to see what you’ve done with the alphabets—if you send me pictures[ on ps@preetisatish.com] I’ll put up the best ones in my next post.[My children will be the judge of which ones are the best!] Or if you have a blog, you can put it up yourself, leave me a comment and I’ll surely come and see.

I’m waiting for this evening to complete the game (we played only till N).